Protect his city and save his father's soul (former)

Leading of his lord's armies in rampages
Murders
War crimes

Brainwashed mage
The Tainted Soul is a major, albeit unwilling, villain from the video game Trials of Mana. He was a teenage Priest Mage named Heath and the best friend of the half-elf cleric Charlotte, one of the six playable heroes, but he was captured by Goremand and turned into his partner as well as the Masked Mage's bodyguard. Being a brainwashed slave, he plays a lesser role than the other two possible second-to-last bosses.

Heath was born in the Holy City of Wendel, house to the main cult of the Mana Goddess and to Wisp, Elemental Spirit of Light.

His father, Belgar was the Oracle of Shadows, one of the two arch-priests overseeing the city with the Priest of Light. Until a little girl fell terminally and no normal magic could be of any help.

Desperate to save her, Belgar studied the forbidden Dark Magic for a cure, but she died too soon and he tried to resurrect her with necromancy. He eventually grew obsessed with Dark Magic, but the Dark Forces corrupted him, turning him into the evil Masked Mage and forcing the Priest of Light to exile him.

Under the Priest of Light's care, Heath became cleric and eventually the captain of the guard of Wendel. He is the childhood friend and surrogate big brother to Charlotte, the orphaned half-elf granddaughter of the Priest of Light.

But Charlotte's elven origin makes her grow slower than humans, being physically and mentally five-years old despite being fifteen, while the slightly older Heath is a normal teenager.

Heath is at heart noble, caring, polite, and eloquent. He is very dedicated to his duties and protective of his loved ones, only attacking if he has no alternative. Yet, he hides it but when dying he reveals that he is tormented by his father's fate.

As the Tainted Soul he becomes creepily cold and unfeeling, Blindly obeying orders and only speaking when needed. He states that the world is bleak and full of misery, dismisses good as pointless and corruptible, and regards death as a respite. He has totally forgotten his former life and would destroy any obstacle in a heartbeat.

Heath is talented enough to reach the highest rank at a young age. While merely promising at first, the Masked Mage raises his abilities to the maximum, making him extremely powerful. In addition to being a first-class healer and summoner, he can teleport, sense presences, manipulate energies and send projections of himself.

The Priest of Light sends Heath investigate on the dwindling Mana Power and sudden aggressiveness of the Beastmen Kingdom of Ferolia. But Charlotte overhears them and fearing the worst, escapes the palace to follow him despite being a novice in magic.

He is attacked by three beastmen who reveal Ferolia’s plans to invade Wendel. He easily defeats them when they seize Charlotte, who showed herself without thinking. Right after, Heath shields Charlotte as he senses incoming danger, only to be knocked out and abducted by Goremand before his helpless friend.

Heath recognizes his father and attempts in vain to bring him back to normal, but the Masked Mage subjects him to evil energies, losing his soul in darkness and making him a walking corpse. Charlotte sets out to rescue her friend, and learns that Goremand is manipulating the beastmen, using their resentment for human prejudice. Later, the Priest of Wendel fells ill after overexerting himself to cast a protection around Wendel.

Now one of the three Great Evils of the world of Fa'Diel with the Dragon Lord and his Dark Majesty, the Masked Mage plans to release the eight Benevodons.

The heroes enlist the Elemental Spirits to reach the Mana Sanctuary, location of the Mana Tree (the earthly avatar of the Mana Goddess). Unfortunately, the Great Evils depleted most of the Goddess' Mana Power, and she can only give them the mythical Sword of Mana. Alas, Goremand and the Tainted Soul capture the heroes' Faerie guide, trading the Sword for her life and they can only comply.

Goremand is harmed by the Sword's Holy Power, but the Tainted Soul heals him and they bend it to their will. He then teleport away to report to his "liege" while Goremand releases the Benevodons. As they are unleashing their armies of monsters all over Fa'Diel, the Faerie tells a distraught Charlotte that she sensed a great sadness in her friend.

The heroes destroy the Benevodons, unknowingly playing into the Masked Mage's hand. They later defeat Goremand in the Jungle of illusions and storm the Mirage Palace, confronting the Masked Mage and his brainwashed son.

The evil wizard reveals that the Sword of Mana now houses the Benevodons' might, which he plans to absorb, so as to surpass and overthrow the Mana Goddess. Hopefully, the Goddess hinders his power boost with her last strength, but the enraged Mage teleports to the Sanctuary to destroy the Mana Tree. The heroes tries to chase after him but Heath teleports them to another room in the palace and tells them that death shall be their final respite.

The Tainted Soul is defeated after a gruesome battle, bringing his soul back from the abyss for a time. (His dialogue in the remake indicates that Heath is struggling vainly from within.) He reveals Belgar's story urges the heroes to defeat him, before ushering a final blessing with his dying breath.

When returning to Wendel after slaying the Masked Mage, Charlotte sees with relief that Heath healed the Priest of Light before falling to darkness, and that the Faerie resurrected him before becoming the Mana Goddess reborn, leaving both friends to rebuild a world without Mana.

The Tainted Soul is widely seen as the hardest of the second-to-last bosses. He is an extremely powerful mage at level 48, with 11543 life-points, who uses fearsome attacks and can often heal himself. He is a formidable foe who must never be underestimated, even when all the heroes surpass his level. He can cast Dark Curse to greatly weaken the heroes or fire balls of white light that deals little to no damage but throws them backwards.

He masters all summons, from the six monsters to three among four divine beings, with the latter heavily damaging every hero and inflicting either shrink, poison, or confusion, which must be cured. Not only that but he casts the Light spells Holy Bolt and Lucent Beam, and the Shadow spells Dark Force on all heroes at once, dealing greater damage than normal. Finally, he masters the very powerful special Shadow spell Ghost Leader striking all heroes.

The best way to deal with him is to keep close and to harass him continuously with weapons and special techniques. The heroes must boost their stats and decrease his own, especially his magic power, as much as can be. Beware for he retaliates to overly powerful attacks with a devastating move. The heroes must heal often and make him lose every life-point he regains in the following minutes. Casting the Moon Sabre spell restores their life-points with every weapon strike they deal, giving them a decisive advantage.

In the remake, Heath is at level 64. His attacks can be dodged and even telegraphed by red zones signalling their area of effect, but the heroes must react quickly. He no longer heals himself and is rather easier to defeat. He hovers over the ground and dashes at light-speed, enabling him to evade the heroes and their attacks.

He throws discs of purple light, spams Ghost Leader whose ghost swarm the field and hinder the heroes, casts the Dark themed Evil Gate and blasts the area with the advanced Lucent Beam. He channels energy from summoned ghouls to unleash a deadly divine summon, but destroying them all knocks him out before he can cast it and makes him highly vulnerable.

Heath is playable in this card-based role-playing game. Each character is played as series of cards to save the Mana Tree from monsters, and can gain power, equipment, and Class Changes. He is featured in various series, each evolving following a distinct path. In most he is featured as his normal, benevolent cleric self, but one of them features him as his evil, sorcerous brainwashed self. 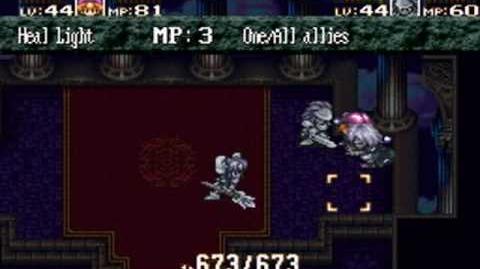