Member of the Barraki

Hypnotizing the others into doing his biddings.

Help the other Barraki to overthrow the Great Spirit and take over the Matoran Universe (formerly).

Survive and reclaim the Kanohi Ignika for himself.
Kill the Toa Inika (both failed).
Assist Brutaka and his team in finding Makuta Miserix (abandoned).

Takadox is a major antagonist in the BIONICLE franchise as he also serves as the secondary antagonist of the Mahri Nui story arc. He is the former member of the Barraki, who once served as the spy for the Brotherhood of Makuta.

He also serves as one of the protagonists in the serial story, Federation of Fear as he was a member of Brutaka's team alongside his fellow Barraki, Carapar. He also serves as the minor character in Dwellers in the Darkness as he encountered

Not much was known of Takadox's past, though he and the rest of his species were created by the Great Spirit Mata Nui as all of them developed the hypnosis power and lived in the underground hive in an island.

Later on, Takadox later employed into the Brotherhood of Makuta and served as their spy.

He was later ordered by Makuta Teridax  to keep an eye on Pridak after the latter abandoned his services of the Brotherhood.

Later, he meets up with Pridak and together, they created the League of Six Kingdoms under the order of Mata Nui. Once this is done, they proceed to meet up with the other four Barraki: Kalmah, Ehlek, Carapar and Mantax to join the alliance. Soon, they manage to conquer several islands and were placed in their respective posts on each islands.

However, when Pridak was consumed with greed and lust for great power, he along with the League of the Six Kingdoms decide to overthrow the Great Spirit and take over the universe. However, Takadox secretly betrayed the other Barraki and went to the Brotherhood of Makuta again and gave the Tablet of Transit to Makuta Teridax in exchange of escaping the punishment. Eventually, the Makuta agreed with Takadox and proceed to launch the attack to halt the rebellion. The attack was eventually successful as Pridak and the allies were defeated and captured by the Vahki as Takadox watches on. Then he tried to persuade Teridax of combining their armies and overthrow the Great Spirit but was bashed aside by the Makuta.

The next day, the other Barraki were brought towards the trial as Takadox was watching the scene among the crowd. Just as Pridak and the others were about to be executed by the Exo-Toa, suddenly Botar and Hydraxon along several Maxilos Robots appear in the middle of the trial and speak with both Turaga Dume and Miserix of how to deal with the Barraki. Despite his pleadings, Takadox was captured along with the other Barraki anyway and were banished to the Pit for their crimes.

Escape & Quest for the Mask of Life

When the Great Cataclysm putted the Great Spirit into eternal coma, it also damage the entire Pit. Due to this, the Barraki were able to escape from their prisons. During the chaos, Takadox murdered Hydraxon and escape into the ocean along with the other Barraki. Once they were inside, the mutagen of the water started to mutate the Barraki, transforming them into their monstrous forms.

Sometimes later, Takadox reunited with Kalmah, Ehlek, Carapar, Mantax and Pridak and they soon realised that due to their new appearances, they could not reclaim their empires outside and the Barraki decided to gather the sea creatures and mold them into an army of underwater monsters as Takadox began hypnotizing the creatures. Together with their newfound army, the Barraki launched their attack on the Matoran of Mahri Nui.

When the Toa Mahri and the Kanohi Ignika arrived into Mahri Nui, the Barraki decided to attack the heroes and get the mask, believing that the mask will change them back into their normal forms. When the being called Nocturn was captured by the group of Zyglak and brought towards Pridak, Takadox hypnotizes him in search of the information about the whereabout of the Mask of Life. Shortly afterwards, Nocturn later joined the Barraki in the war against the Toa Mahri.

When the Toa Mahri (which minus Matoro) were heading towards the Pit to get new weapons, Takadox immediately hypnotizes the 300-foot mutant Venom Eel and send it to attack the heroes, though they managed to escape.

Exposed as the Traitor

When Mantax obtained the Kanohi Ignika and a Tablet of Transit, he immediately summoned the other Barraki to the meeting. During the meeting, Mantax demands the traitor among the Barraki, which prompted Takadox into confessing his treachery. However, he also lied that the Brotherhood of Makuta was trying to help all of them, much to the other Barraki's disbelief. However, the meeting was interrupted when the sudden fight between the Toa Mahri and a group of Gadunka crashed in. Taking an advantage, Takadox immediately attacked Mantax by cutting off his claw and prepared to execute him, only to be stopped by both Toa Jaller. Mantax retaliates by hitting him with his venom spikes, causing him to be temporaily injured. During the chaos, the Toa Mahri succesfully retrieved the Mask of Life and quickly headed back to Mahri Nui. Pridak however decided to let Takadox live so that he can be dealt with when the time comes.

However, this action also caused Pridak to get angry as he decides to launch an attack on Mahri Nui. So, he and the entire army arrive towards Mahri Nui and attack the underwater city, resulting of its destruction as well as capturing the Matoran, Toa Kongu, Toa Nuparu, and Toa Hewkii and reclaiming the mask. When Pridak got the mask, he was suddenly filled with rage and became paranoid. But before this could happen, Takadox immediately step into the scene and temporarily quelled Pridak with his hypnotic power. Soon after that, Pridak along with Takadox, Ehlek, Carapar and Nocturn as well as the underwater army decide to march towards the Cord to finish their conquest while Kalmah was preparing the army to invade Metru Nui.

As Pridak and the others were marching across the Mountain of Salt Pillars, they were suddenly confronted by the lone Maxilos Robot. Immediately, the Maxilos Robot revealed himself to be Teridax, Pridak was furious at him for ruinning his plans in the past. Then, the Barraki engaged him in the battle. After the Barraki were defeated, Takadox tries to escape but was stopped by Teridax. In a desperate attempt, Takadox gave him a broken Tablet of Transit, showing him that he would not be captured. However, Teridax rejected the offer and destroyed the Tablet of Transit, and proceeded to scorn Takadox with a mental vision of him being attacked by his own army, which caused Takadox to lose consciousness.

Later when Pridak had defeated Teridax, Takadox regained consciousness and witnessed Pridak eventually succumbed in his rage. The Barraki leader then blamed them for causing their downfall and revealed that they are just the pawns for his plan before attacking them in the blind rage.

In Daxia, Takadox and Carapar were separated from the other Barraki and were placed in the cell where Roodaka, Vezon and Spiriah were inside. Then, they were approached by Brutaka, who enlisted them into his team after he was given the order to find and rescue Miserix. Takadox was also given with a special Breathing Helmet to be able to breathe air again.

He remained in Artidax until he crossed paths with the Toa Mahri, Jaller, Nuparu, and Hahli who were carrying the Heart of the Visorak in order to put an end to the Horde. He took the opportunity to hypnotized the three making them stand still, and then stole their boat to leave the island before the island's volcano erupted.

After Teridax's death at the hands of Mata Nui, Takadox migrated to Spherus Magna. He was restored to his original form by the Mata Nui.

Takadox is a very cunning, traitorous, manipulative and devious schemer. When he was siding with his allies and fighting against his opponents, he considered them as the moving pieces on the board as he would not stop at nothing of achieving his own goals as well as controlling others as he wishes.

He is also a skilful pragmatist as he was willing to use dirty tricks in order to outwitted his enemies and further his own goal. He is also a coward who was hoping to have his own life spared by the others in order to escape his defeat.

Despite being the member of the Barraki, Takadox shows no loyalty to his teammates as he was plotting to betray them when the time is right and claim the Kanohi Ignika for himself. However, he deeply cared for Carapar, the only being that he got along with and both of them are willing to find the way to survive together in case of anything happened to the other Barraki.

While Takadox was a weak fighter as he does not possess brute strength, his hynopsis power was very powerful as he was capable of making the others to do his bidding with ease, thus making him an excellent strategist. He also wielded a pairs of Twin Knives but he only used them for defending himself and outwitted his opponent quickly.

He also commanded an army of underwater insects.

He was later given 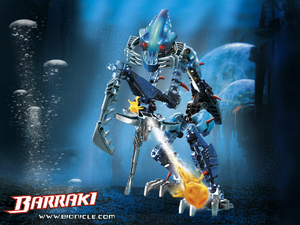 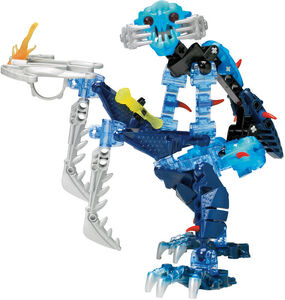 Takadox in the set form. 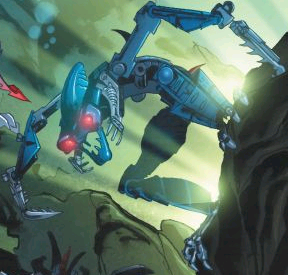 Takadox as he appears in the comics. 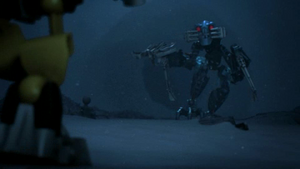 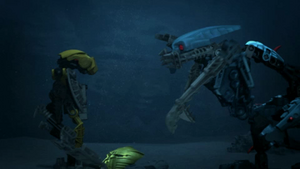