Takaharu Fukuroda is an antagonist from Kill Ia Kill. He is the Boxing Club Captain at Honnōji Academy and was a Two-Star student.

He was voiced by Mitsuo Iwata in the Japanese version, and by Benjamin Diskin in the English dubbed version.

Takaharu is a teenager of short stature with gray/light green eyes, buzz-cut length hair, and a noticeably missing tooth. He wore a two-star Goku Uniform which consists of a large pair of boxing gloves, a head guard, boxing robe, boxing shorts secured with a championship belt and high-top sneakers.

As the captain of the Boxing Club, Takaharu is always itching for a one-on-one match with anyone, especially if they are enemies of the student council. He is also especially proud of his boxing skills and is more-so of the gloves that come with his Goku uniform.

Takaharu makes his first appearance when he intercepts Ryūko Matoi before she can attack Satsuki Kiryūin. With Satsuki's blessing, Takaharu engages Ryūko and quickly beats her down with the power of his Goku Uniform's iron gloves. He is then ordered to confiscate her Scissor Blade. However, since it had begun to rain, Takaharu slips on the wet ground as he continues to fight his defiant opponent, allowing her to make a swift retreat. Takaharu is disciplined for his failure by Uzu Sanageyama.

Determined to redeem himself, Takaharu lures Ryūko back to the academy by publicly announcing the execution of her friend, Mako Mankanshoku, for treason against the Student Council. Ryūko returns, this time wearing a scanty suit of armor, and the two engage in a formal boxing match. Thinking that Ryūko is trying to cheat by distracting him with her armor's sexual appeal, Takaharu retaliates by baring his glove's true, spiked form. When he uses it on her armor, however, his glove shatters and he discovers none of his attacks can phase her. He is swiftly and utterly crushed by Ryūko, who uses her Scissor Blade to destroy his Goku Uniform and send him flying out of the ring towards Satsuki, who is defended from his hurdling body by her attendants.

Takaharu later appears in Episode 22, along with other former club presidents, where he is revealed to be a victim of the COVERS. He then appears in the next episode, powering the S.S. Naked Sun's turbines with Mako Mankanshoku and the other club leaders. After that, he is visible in the final battle, fighting alongside Omiko Hakodate and others.

The iron fists of his Two-Star Goku uniform were easily able to crush Ryūko Matoi, despite her wielding the scissor blade. However, when Ryūko fights him again with Junketsu, the Kamui uniform was easily able to crush Takaharu despite him having a Two-Star Goku uniform. His abilities overall are above average for a student, but pale in comparison to members of the Elite Four.

As captain for the Boxing Club, his Goku uniform has a theme of boxing. The iron gloves he has are quick to pulverize any unarmed foe such as Ryūko Matoi when she originally fought him. One or more of his gloves can even transform into a giant block of spikes, or a spinning drill. He can also summon a bunch of miniature gloves to rapidly strike an opponent. 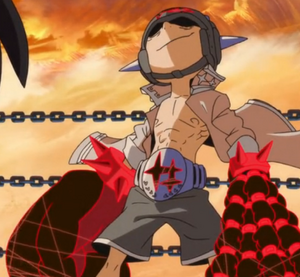 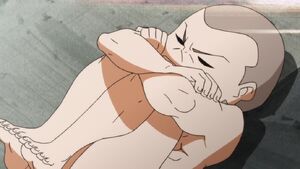 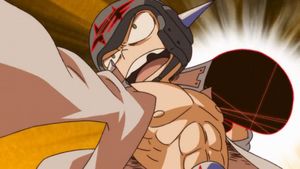 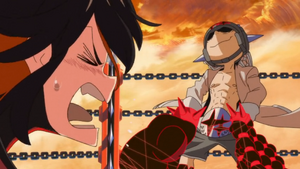 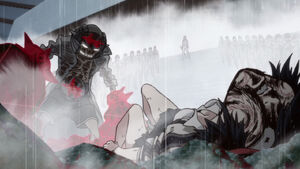 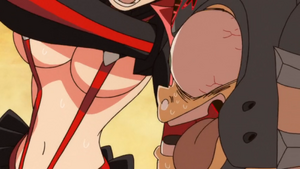