Strength
Complete domination over his victims

Raping every women in order to escape the game (succeeded).

Takatou Keisuke is the villain protagonist of the guro-eroge visual novel Euphoria and its anime adaption.

Although he is the "hero" of the story, he also is presented as an extreme sadist who's sexual sadism disorder comes to the surface after he is forced into a game where he must violently rape women, known as "keyholes", as the game's "unlocker".

At first glance, Takatou appeared to be a honest and compassionate individual who refused to harm the other female around him in order to escape.

However, witnessing the "game over" of Miyako Andou, in which she is very brutally tortured to breaking point via an electric torture device, he becomes aroused, triggering his sadistic desires to come to the surface.

Via the game he is shown to find sexual satisfaction in violent sexual acts and from hurting women. Even to the extent where he becomes aroused when he is violently punching Nemu Manaka across the face, punching her a lot more then he needed to. He doesn't seem to show any regard for the consequence of his sadistic acts, and takes gratitude in the idea of severing injuring a woman. Such as when he tortured Nemu's tongue with pliers to an extent where it seemed like it would rip, yet only continued without any care. When Nemu said through her screaming that she felt like she could die, he simply responded back with "Well then die".

Takatou Keisuke is a teenager. He has black hair and gray eyes. He wears a grey jacket and black trousers. Like all other "participants", he has an electronic necklace, which can hurt him if he is reluctant to assault the other victims. 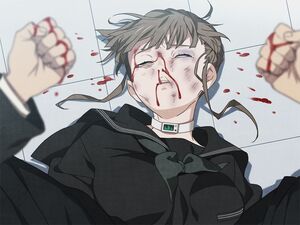 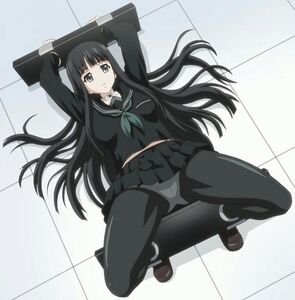 About to brutally whip Rinne.
Add a photo to this gallery
Retrieved from "https://villains.fandom.com/wiki/Takato_Keisuke?oldid=3541616"
Community content is available under CC-BY-SA unless otherwise noted.