Prevent S.E.E.S from eliminating the Dark Hour
Witness the end of the world
(both failed)

Takaya Sakaki is the secondary antagonist of the video game Persona 3. He is the leader of Strega and one of three surviving members of a project carried out by the Kirijo Group in an attempt to create artificial Persona users. As his power wasn't awakened naturally, he cannot fully control his Persona. He functions as the Protagonist's foil, leading the rival group of Persona-users and setting himself up as a false messiah.

He is voiced by Nobutoshi Canna in the Japanese version, and Derek Stephen Prince in the English dubbed version, the former of whom also voices Nnoitra Gilga, Makoto Waltz Segai and Ryura

Takaya has long gray or platinum blonde wavy hair and yellow eyes. He wears a wire like headband, faded and torn light blue jeans with a red, ragged scarf tucked in the back pocket, a studded white belt, and brown boots. He has full tattoo sleeves on both arms, and a small tattoo on his lower back. He is never seen wearing a shirt, jacket, vest, or anything of the sorts. He also looks rather emaciated, commented on in-universe - one NPC thinks he lives on nothing but air, and Junpei calls him a 'freaking ghost'. His age, like the other Strega members, is never revealed, but he appears older than both Jin and Chidori and SEES, perhaps in his early twenties.

Takaya was designed around the concept of "charisma", according to Soejima, particularly in reference to cult leaders who he considers to be "obviously suspicious", yet with their high charisma able to garner support and adoration from others as easily as wealth and power. His first design began as a "cool and handsome" clean-shaven male with combed back hair, but his final design is achieved as Soejima attempted to make him more antagonistic and merciless. The revolver Takaya uses is a model of Smith and Wesson Model 500.

Takaya's personality is added during the course of the story. In his first appearance, where he was on a "mission" with his fellow members, he is shown to be cold and indifferent, mocking and pointing at his victim with his gun. When asked by his victim why he is doing this, Takaya says that it is not the victim's concern and even justifies his action by saying that "people hear what they wish to hear and believe what they want to believe". He also tells his victim that he "squeal[s] most magnificently", implying a highly sadistic streak.

During his first encounter with SEES, he tells the team that the world is crawling with sin and that there will always be disasters, caused by Shadows or human folly, further reinforcing his negative worldview. This, along with his other comments during the game, shows that he is misanthropic. His later multiple assassination attempts (Shinjiro in the female protagonist route if max his Social Link, Ken, Junpei etc.) shows that he has little or no appreciation for the life of others with the exception of Jin and Chidori, However, he convinces Jin to stop SEES from advancing while knowing that he is not capable of doing so, also knowing that the Shadows from the lower floors can attack Jin as well.

When confronted by SEES for the final time, Takaya shows a great deal of himself. He simply answers to the questions of the team without any intimidation and also in a very melancholic manner, asking them what they hope to achieve since Nyx is unbeatable. During this conversation, he claims that the future is but an illusion and a soul can be satisfied if it only lives for the moment. He claims that any meaning in life was lost long ago and that humanity actually prays for Nyx's "salvation".

Takaya's actions and philosophy seems to stem from the fact that he has nothing to actually live for: the fact that he is dying seems to have some impact to his mental state, but his comments in the game imply that he is a bitter and weak-willed man who is simply trying to find some excitement in his short life, and that in fact he is jealous of SEES for their hope and will to live.

Takaya crosses this when he murders Shinjiro Aragaki, who died getting in the way of a bullet meant for Ken Amada, who was only ten years old at the time. 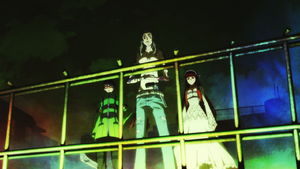 Takaya with his subordinates from Strega 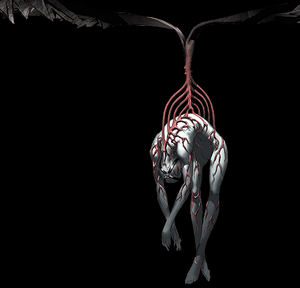 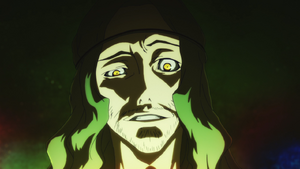 Retrieved from "https://villains.fandom.com/wiki/Takaya_Sakaki?oldid=3845044"
Community content is available under CC-BY-SA unless otherwise noted.