Capture Raizo and bring him back to his master (succeeded).

Takeshi is the secondary villain in the 2009 film Ninja Assassin.

He was portrayed by Rick Yune who also played Kang Yeonsak in Olympus has Fallen and Johnny Tran in The Fast and the Furious.

Takashi is an older member of the Ozunu clan. Often doing training fight with Raizo, he wins in first training duals but loses in next duals, as Raizo learns to perform his technics. One day, Kiriko, fed up with the harsh methods, decides to escape. However, she is catched by Takeshi. The leader of the clan, Lord Ozunu, offers to Takeshi to execute her in front of all the students to make an example of what happens if someone betrays the clan. Takeshi accepts, looks at Raizo with a sadistic smile and kills her with his sword. Because of that, Raizo becomes driven by revenge against the entire clan. One day, Takeshi brings back another ex-member who escaped the clan. Ozunu orders Raizo to execute her but remembering what happened to Kiriko, he refuses and betrays the entire clan.

Several years after, Takeshi is sent by Ozunu to assassinate Mika Coretti, an Europol agent based in Berlin because she looks too deep into the clan’ crimes and puts at risk the clan’s hidden nature. Before Takeshi can enter Mika’s apartment, Raizo escapes with her. Knowing his rival is behind this, Takeshi says : “Run, little brother. Run.”.

Raizo is captured by Europol forces and imprisoned into a warehouse. Takeshi, with his group of ninjas, ambush and kill several of the agents. Mika frees Raizo and goes to the car who is upstairs. Raizo then waits Takeshi who arrives in front of him and calls him “little brother” again. He fights him with his army. The fight ends in the streets of Berlin, where Raizo is hit with a car. Takeshi approaches and is about to kill him but Mika hits him with the car she picked up earlier. They go in a remote hotel and Mika give to Raizo a tracking device while he is asleep. She goes outside and sees the ninjas led by Takeshi penetrating in the room and kidnapping Raizo. They bring him back to Ozunu’s lair

Overlooking at first the device installed on Raizo, Takeshi spots it just before Ozunu executes the hero for his betrayal. He tries to alert his adoptive father but Europol agents break into the lair before they can do anything. In the siege, Takeshi hides in the training room with some other ninjas where they found Raizo waiting. The rival lets his fellow fight him but they are defeated pretty quickly. Takeshi goes to fight him personally. After a moment, he takes off his hood and taunts him about Kiriko. However, this proves to be his downfall as Raizo proceeds to kill him right after that in his rage.

Trained from his childhood to be as ruthless as possible, Takeshi indeed embodies these traits, in addition of being completely loyal to Lord Ozunu. He also shows a degree of sadism, smiling to Raizo when executing Kiriko. Takeshi shares a rivality with Raizo, as both seek to surpass each other with their skills. This causes the villainous ninja to look down at him and to call him "little brother". 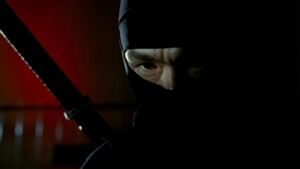 Young Takeshi about to execute Kiriko 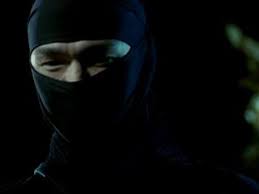 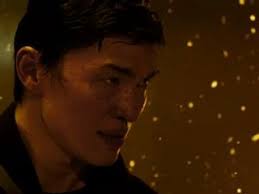