Steward of the Kiryūin family

Looking after the manor.

Kill Soichiro Kiryuin and to prevent him from escaping.

Takiji Kuroido is a minor antagonist in the 2013 anime Kill la Kill.

He was voiced by Kōsei Hirota in the Japanese version and by John Snyder in the English version.

Prior to the start of the anime, Takaiji, presumably under orders from Ragyō Kiryūin, attempted to assassinate Soichiro Kiryuin (who will eventually become Isshin Matoi) while the latter is escaping. He seemingly succeeded as a missile was launched onto the scientist's car. However, Soichrio actually survived the explosion along with a baby Ryūko Matoi.

Takaiji first debuted in Episode 3 where he witnesses Satsuki Kiryūin putting on Junketsu. He tries to stop her only to be held back by Mitsuzō Soroi.

In Episode 16, Satsuki revealed that Takaiji and the others in the Kiryūin manor were confined so they couldn't interfere during her stay there.

In Episode 22, as Ragyō puts her plan into motion, Takiji and those who were once incarcerated are absorbed into the COVERS.

His fate after the defeat of the COVERS and Ragyo's suicide is unknown, though it is possible he could be alive as the Life Fibers are releasing the humans under their grasp after Ryūko commanded them to do so through Absolute Domination.

Takiji Kuroido is a man of short stature with short black hair and a mustache. He wears brown sunglasses and a black suit with a bow tie. 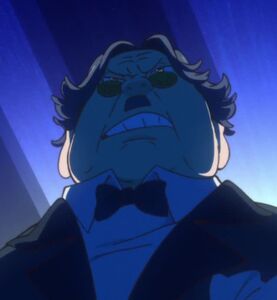 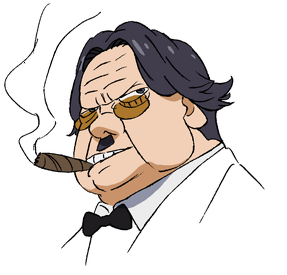