Locate the first half of the Amulet in the Chateau in France.
Find the second half of the amulet in Syria.
Locate the hidden chamber in Yemen.
Track and pinpoint the entrance to the Atlantis of the Sands (all succeeded).
Help Katherine Marlowe steal the Djinn from The Atlantis of the Sands.
Use the Djinn to rule the world through mass subjugation.
Kill Nathan Drake and Victor Sullivan (all failed).

Talbot is the secondary antagonist of Uncharted 3: Drake's Deception. He is Katherine Marlowe's right-hand man and a high-ranking agent in Marlowe's Hermetic Order. The two attempt to find the Iram of the Pillars and retrieve a brass vessel containing the spirits of the Djinn.

An enigmatic man, he is initially believed to be immortal, due to being shot in the chest and surviving. However, this is later revealed to be a hoax fulfilled by a combination of a bulletproof vest and hallucinogenic drugs.

He was voiced and motion captured by Robin Atkin Downes, who also voiced Travis Touchdown in the No More Heroes series, The Medic in Team Fortress 2, Prophet of Regret in Halo Wars, Luxord in Kingdom Hearts II, Davy Jones in Pirates of the Caribbean Online, Destro in G.I. Joe: The Rise of Cobra video game, Grand Admiral Thrawn in Star Wars Empire at War: Forces of Corruption, Sabretooth in X-Men: The Official Game, Romulus Slag in Ratchet & Clank Future: A Crack in Time, George Washington in Assassin's Creed III, Yasha in Asura's Wrath, Robert in The Last of Us, The Boss (Male Voice 3) in Saints Row IV, Sinjin in Fallout 4, The Riddler in Telltale's Batman, Sinestro in the Justice League Unlimited episode "Alive", Mumma-Ra in the 2011 Thundercats series, Baron Zemo in Avengers: Earth's Mightiest Heroes, Abomination in Hulk and the Agents of S.M.A.S.H., A Guardian of Eternal Youth, Harold and Broseph Chillaxton in The Regular Show, Deathstroke in Beware the Batman, The Master in The Strain, Valak in The Conjuring series, Doomsday in Batman v. Superman: Dawn of Justice, Falcon Graves in DuckTales, and Shinnok in Mortal Kombat Legends: Scorpion's Revenge.

Not much is known about Talbot or his past, but he became a high ranking member of the Hermetic Order, a secret society established by Queen Elizabeth I to control Britain's enemies through deception and fear. Talbot became close to the order's leader, Katherine Marlowe, and shows great loyalty to her. It's possible that he is Marlowe's protege, and would assist her in trying to find the Iram of the Pillars from T.E. Lawrence and Francis Drake's trails.

Trying to find Iram of the Pillars, Katherine Marlowe and Talbot discovered that they would need Sir Francis Drake's ring, which was currently in the possession of Nathan Drake.

Talbot, Cutter, Nathan Drake and Victor Sullivan meet up in The Pelican Inn to supposedly trade the ring for money, when in reality, Nate and Sully are only trying to flush out Talbot and Katherine. Sully inspects the money and claims that it's counterfeit. Nate hastily takes back the ring and backs away, but Cutter and his thugs attack them.

While Nate and Sully fight Cutter and his thugs, Talbot flees from the Inn with the money. He meets Katherine and drives her car to Nate and Sully, who are trapped by Talbot's men in an alley. After Marlowe takes the ring, Nate attempts to grab it back, but Cutter shoots both him and Sully. Marlowe becomes furious at Cutter for his actions. Talbot is keen to get away, however, and drives off with Marlowe.

Talbot and Marlowe then travel to their hidden library beneath London to decode the ring using Francis Drake's ring decoder. However, the ring doesn't fit in the decoder, and they both realize that it's a fake. Marlowe orders her men to find Nate and bring the real ring back to her. Talbot and Marlowe then both leave the library, unaware of Nate's presence.

Talbot knew that Nathan Drake and Victor Sullivan were heading to the Chateau, and decided to follow them there. Inside the secret chamber beneath the Chateau, Talbot, Harris and another agent find Nate and Sully as they attempt to leave with one half of an amulet, an important clue to finding Iram. Talbot orders Harris to get the artifact, but when he does, a swarm of spiders crawl from the walls, and kill Harris. Talbot orders the other agent to acquire the amulet before it is long beneath the spiders. The agent succeeds, and the two of them leave the chamber. Later, Talbot orders his men to burn down the Chateau, in hope it will take care of Nate and Sully for good.

Talbot travels to Syria to stop Chloe and Cutter from finding the other piece of the artifact, still under the impression Nate and Sully are dead. He discovers all four of them nearing the entrance, and decides to drug Cutter, forcing him to give his gun and journal to Talbot. Talbot disappears around a corner as Nate and the others arrive.

Talbot and his agents meet up with Nate, Cutter, Chloe and Sully the next morning, after the heroes leave the puzzle room. Talbot orders the latter to drop their weapons and gloats about being equally matched until his other men arrive. Suddenly, Charlie acts as if he's been drugged again and points his gun at Nate. Talbot orders Cutter to shoot Nate after the heroes drop their guns, but Cutter was merely pretending and shoots Talbot in the chest. The four escape to a nearby tower in hopes of losing Talbot and the agents.

After Cutter is left trapped on the tower mere minutes later, Talbot arrives with Marlowe. To Cutter's confusion and horror, he shows no ill effects from the gunshot. He takes the amulet from the reluctant Cutter before Marlowe's agents pour gasoline around him. She then lights a flame, leaving Cutter trapped. Talbot and Marlowe then disperse, leaving their agents to take care of Nate and the others.

Talbot arrives in Yemen the same time Nate is there. Unknown to Nate, Talbot is fully aware that Nate is following him through the streets. After Nate rounds the corner in a hotel, Talbot hits him with a brutal punch, before throwing Nate out of the window.

Talbot appears again when he drugs Nate, using the same method he used on Charlie Cutter. Nate has hallucinations while hearing Talbot telling him to relax. The hallucination ends, and Nate finds himself in a Yemen square with Katherine Marlowe, Talbot and Rameses. Talbot keeps silent throughout the conversation between Marlowe and Nate, until he informs Katherine that Sully, who knows the coordinates to find Iram of the Pillars, has been discovered. Nate loses his temper, throws the table forward, and chases after Talbot. Eventually the two of them both arrive at a rooftop with no easy escape. The two have a quick fist fight, before Rameses knocks Nate out with a large wooden board. Talbot and Marlowe tell Rameses to kill Drake, but the pirate decided to keep him alive so he could find the Iram of the Pillars himself.

After arriving in Iram, Talbot seemingly kills Sully with a T-Bolt Sniper after an eclipse. Enraged, Drake chases Talbot, following him down an elevator shaft. Talbot drops a smoke bomb behind him, blinding Nate at first, before forcing him into another level of hallucination. Nate gives chase to Talbot, but loses him, and is instead confronted by a number of odd hallucinations which is caused by the water. This is later revealed to have been a hallucination.

Talbot and Marlowe made their way towards the center of the city, discovering a small reservoir, containing a brass jar that Marlowe is seeking. They used a crane to lift the brass vessel out but Nate and Sully arrived to thwart their plan by destroying the winch, creating a destructive chain reaction that ends up causing the entire city (which apparently resided atop a dormant sinkhole of quicksand) to collapse. Talbot grabbed Katherine and the two of them dispersed.

Talbot and Marlowe ran into Nate and Sully later on a spiral staircase, as the city falls apart. The staircase collapsed, and Talbot, Marlowe, and Nate became trapped in a pit of quicksand. After Talbot and Nate are able to get out of the quicksand, Talbot yelled at Nate to save Marlowe. Nate tried to rescue Katherine but she was already in too deep and was sucked beneath the sand, suffocating to death. Nate and Sully dispersed as Talbot cried out in rage, and decided to get revenge for his mentor's death.

Nate and Sully almost reaching the exit, but Talbot, having inconspicuously found another way to the surface beforehand, suddenly blocked Nate's way. Talbot pulled out a knife and engaged in a brutal fist fight with Nate, attempting to stab him but Nate overpowered him at every turn. Eventually, Talbot managed to gain the upper hand, and would have killed Nate, if not for Sully's intervention.

Sully came to Nate's rescue by shooting Talbot in the shoulder with a pistol, but the platform crumbled and Nate fell off while Sully lost his pistol. Nate managed to recover it while grasping the side of the platform. Talbot, fought Sully, and, beating him, was about to crush his head with a rock. Nate shot and killed him, and he plunged off the platform and fell to his demise into the remains of the crumbling city. 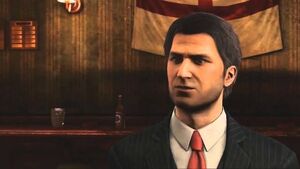 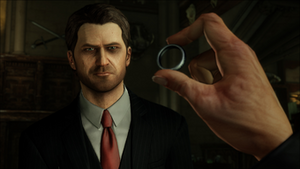 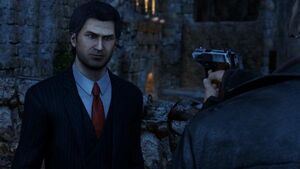 Talbot telling Cutter to give him his journal in Syria. 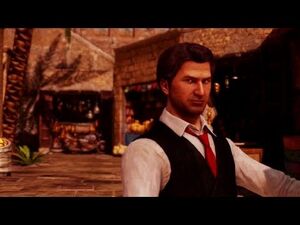 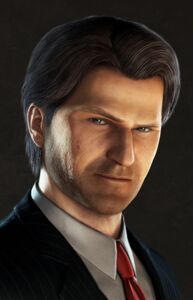