Member of the Society of Shadows

Being in the League

To assist her father

She is voiced by Helen Slater.

Talia first appears in Off Balance, when she and Batman work together to stop Vertigo. However, Talia was actually sent by her father to retrieve the drill, and in the ending, she betrays Batman and reveals her true allegiances.

Aside from appearing in this series, Talia appears as an antagonist in Superman: The Animated Series. Trying to save the life of her father, Talia and some henchmen rob a train holding Native American artifacts. Superman tries to stop her, but she finds the Shaman's Staff and blows up a bridge to keep Superman from stopping her. She tells Superman that the brakes are already disabled and Superman has no choice but to try and stop the train. She later disguises herself as Lois Lane to trick Superman. 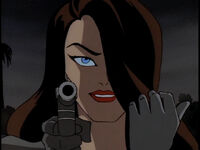 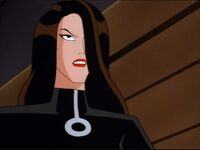 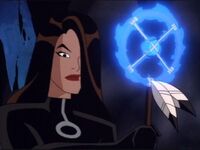 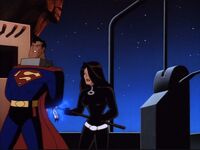 Talia as Lois
Add a photo to this gallery

Retrieved from "https://villains.fandom.com/wiki/Talia_al_Ghul_(DC_Animated_Universe)?oldid=3429600"
Community content is available under CC-BY-SA unless otherwise noted.