Heiress of the League of Shadows, terrorist, businesswoman

Ridding the world of economical problems and unnecessary people

Talia al Ghul (known for most of the film as Miranda Tate) is one of the 2 main antagonists in the 2012 film The Dark Knight Rises. As the heir to the League of Shadows after the death of her father, Ra's al Ghul she seeks Gotham's demise with the help of the brutal terrorist Bane.

She is portrayed by Marion Cotillard as an adult and by Joey King as a child.

Before Talia was born, her mother, Ra's al Ghul's wife, was placed into a well converted into a prison known as The Pit while she was pregnant with Talia as punishment for their secret marriage. After her mother was killed, Talia was befriended and protected by a prisoner simply known as Bane. Bane helped Taila escape at the cost of severely injuring himself. She later returned with her father to enact vengeance upon the prisoners of the Pit and then Bane was rescued. However, Ra's later excommunicated her friend from the League of Shadows. For this action, Talia couldn't forgive her father but was willing to inherit his plan of wiping out Gotham City after he died fighting Batman. Talia and Bane then formulated a plan to destroy Gotham City once and for all as well as getting revenge on the The Dark Knight that protects the broken city.

She revealed this information as she literally backstabbed Bruce Wayne in his Batsuit after he took down her accomplice and protector, who was lying on the floor after Batman wrecked Bane's mask's pipes in their rematch. Talia then orders for a convoy to protect the reactor core that Bane had placed in the armored trucks in the hopes of securing its detonation. Talia later dies when Batman rams the truck carrying both her and the increasingly unstable reactor core off the top of a ramp, mortally wounding Talia. Even moments before her death when the heroes discover her in the wreckage, she asserts that she won, as the unstable nuclear reactor was only minutes from detonating in an Atomic explosion, Talia then dies, believing her plan to be a success. Batman is forced to pilot the nuclear device out of Gotham using his high tech stealth plane so that he would save the city. However Batman survives the explosion as he used the auto pilot to take the bomb out to sea while he ejected. Ultimately all the work and plans of Talia and Bane's League of Shadows were foiled as Gotham was saved, Batman survived, and the living League members in the city were rounded up by the Gotham Police. 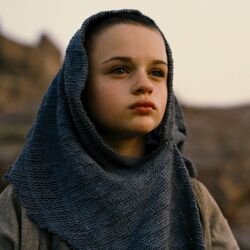 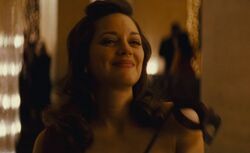 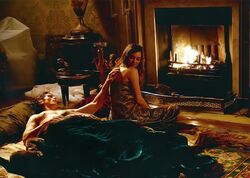 Talia after having sex with Bruce Wayne 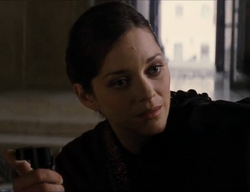 Talia revealing herself, and her Evil Grin
Add a photo to this gallery

Retrieved from "https://villains.fandom.com/wiki/Talia_al_Ghul_(Nolanverse)?oldid=896956"
Community content is available under CC-BY-SA unless otherwise noted.