The Child of Ra's al Ghul

Heir and Leader of the League of Shadows

Ridding the world of economic problems and unnecessary people.

Pretending to be "Miranda Tate".

Get a high position in Wayne Enterprises to get close to Bruce Wayne (succeeded).

Talia al Ghul also known as Miranda Tate, is one of the two main antagonists of The Dark Knight Rises, alongside Bane. She is the heir to the League of Shadows following the death of her father Ra's al Ghul, and had sought to finish what he previously masterminded by destroying Gotham; with her personal accomplice and protector Bane proceeding with the plot all together whilst she remained hidden for most of the film under the alias Miranda Tate, thus she is the final antagonist of the The Dark Knight trilogy all together.

She was portrayed by Marion Cotillard, who also played Mal in Inception, Lady Macbeth in 2015 version of Macbeth, and made Scarlet Overkill's French voice in Minions; and by Joey King (as a child), who also portrayed Magenta in DC TV series Flash.

Talia was born and spent her childhood in a prison known as the Pit. Her mother, the Warlord's daughter, was imprisoned there by the Warlord to take the place of Talia's exiled mercenary father. One day, when Talia was a young child, the prison doctor forgot to lock their cell and her mother was attacked and killed by a group of prisoners. Talia retaliated and stabbed one prisoner in the back with a knife, but then she was protected from reprisals by another prisoner known simply as Bane.

As an older child, she was protected by her friend Bane and climbed out of the Pit, the adrenaline caused by her fear gave her the strength to make the jump required to escape. She then found her father, who had joined the League of Shadows and became known as Ra's al Ghul, and brought him to the Pit with the League of Shadows to enact vengeance for the death of his wife. There, he found Bane after the prisoners and doctor had irreparably damaged him after he helped Talia escape. Both Talia and her protector were then trained in the ways of the League.

Ra's began to see Bane as a reminder of the hell he left Talia's mother to die in. Bane was then excommunicated from the League of Shadows, due to as Talia put it, because he loved her. It was something she could not forgive her father for until she learned that Batman was responsible for his death in their confrontation during his assault on the Gotham Narrows. She knew the identity of the perpetrator: Bruce Wayne.

She committed to ensuring that the League of Shadows fulfilled its mission to restore balance to the world by destroying Gotham City. Talia took on the identity of Miranda Tate and blended into Gotham society, and many years later the un-excommunicated Bane and the rest of the League arrived in Gotham covertly through the use of John Daggett.

As the Philanthropist Miranda Tate

As Miranda Tate, she became a Wayne Enterprises board member engaged in philanthropic endeavors for Gotham City, including charity fundraising. She personally heavily invested in Wayne Enterprises clean energy fusion reactorproject. She persistently tried to meet with Bruce to discuss the clean energy project after he shut down the project for three years, but she was ignored by a reclusive Bruce. She was described to Bruce as "quite lovely" by Alfred and Lucius Fox. Lucius also described her as "smart" to Bruce and reminded him that, "She has supported the project all the way."

Later that day, Miranda met Bruce on the doorstep to Wayne Manor in the pouring rain. He led her to another door which he forced open. She told him, "I'll take care of your parents' legacy, Bruce," and began asking about Rachel Dawes and the absence of Alfred at the manor. Miranda kissed Bruce and the power went out. The pair made love, slept together and started a fire, while Miranda admitted she was not always wealthy.

She made an excuse for the scar on her back as Bruce traced it with his fingers. Miranda suggested that they leave Gotham together on her plane, to which he replied, "Someday perhaps. Not tonight," as he'd planned to meet with Selina Kyle to take him to Bane. He was defeated by Bane and sent to the Pit, and there he learned about the child of Ra's al Ghul and mistakenly assumed it to be Bane. The legend of the child's escape from the Pit inspired Bruce to believe that escape was possible.

Soon, a meeting was called by Miranda with a skeptical Lucius to discuss the fusion reactor at Wayne Enterprises, but there Bane and the mercenaries were waiting for them in the board room. They took the two of them and Douglas Fredericks to the underground bunker where the Wanye Enterprises fusion reactor was held. When Fredericks' life was threatened, Miranda told them to stop and the reactor was turned on with her and Lucius's hand prints.

Dr. Leonid Pavel, a nuclear physicist kidnapped by Bane, turned the reactor into a nuclear bomb and Bane had the core removed. Miranda and Lucius were then released. The bomb was taken to the Gotham City Stadium and there the world was told by Bane that an anonymous citizen, an "unsung hero," controlled the trigger to its detonation. The bomb was later taken to a truck to patrol the streets of Gotham.

After Bane took over Gotham, Miranda and the other Wayne Enterprise board members hid with the help of a rag tag group of cops that hoped to free the city. Special forces men led by Captain Jones from the U.S. government infiltrated the city and were brought by John Blake to a meeting with Lucius and Miranda to discuss the bomb. However, Bane and the mercenaries arrived there and killed the special forces men. "Someone sold us out!" Blake said as he escaped with Miranda, while the mercenaries took Lucius hostage as the rest of the board members were sent to exile by Jonathan Crane in a kangaroo court. Miranda assisted Jim Gordon in tracking the bomb truck until both were taken captive by a mercenary band led by Barsad. Gordon later discovered that he had been misled into tracking a decoy.

After five months, Bruce finally escaped the Pit and returned to free Gotham. He met up with Lucius and Miranda as captives, and told Miranda he would not forget about her. Selina helped to rescue Lucius and Batman rescued Gordon, from whom he was told that Bane had Miranda.

Batman presented Selina with the Batpod, and she muttered, "You're gonna wage a war to save your stuck-up girlfriend." Rallying an army of officers, Batman and the cops attacked Bane and his men as Miranda watched from the lobby of Gotham City Hall. Batman damaged Bane's mask in their confrontation at city hall and caused him immense pain and Batman gained the advantage over him in the fight.

As Batman interrogated him on where the trigger to the nuclear bomb resided, Miranda stabbed Batman and revealed her true identity as Talia, the child of Ra's al Ghul, and the anonymous citizen who had the trigger to the bomb. She told him she was finishing her father's work by destroying the city and told the tale of her past as she repaired Bane's mask. She then hit the trigger, only to discover that her signal was blocked by Gordon.

"Maybe your knife...was too slow," Batman commented on her plan. She ordered for a convoy to protect the bomb as it counted down to detonation and told Bane to guard Batman before she said her final goodbye to Bane. She left the lobby of city hall to be escorted from a Tumbler to the bomb truck. Barsad was killed during the escort by Peter Foley and Foley was then killed by Talia's Tumbler.

The Convoy Battle and Death

Bane was killed by cannon fire from the Batpod as Selina arrived to help Batman and she on the Batpod and Batman in the Bat gave chase and dismantled the convoy of Tumblers as they attempted to lead the truck back to the reactor room where Lucius was waiting. Batman fired upon Talia's truck and she swerved off the roadway where the truck fell and she was fatally wounded.

In the throes of death, she revealed to Batman that she had anticipated that he was attempting to lure her back to the reactor bunker, and she remotely activated the emergency flood to ensure that they failed in stabilizing the bomb in the reactor. Lucius narrowly escaped the flood in the bunker. She died believing that her plan to destroy the city that killed her father would come true.

However, the plan failed as Batman flew the Bat and the bomb over the Gotham bay and let it go where it exploded harmlessly, thus, saving the citizens of Gotham and leaving Talia's death in vain. 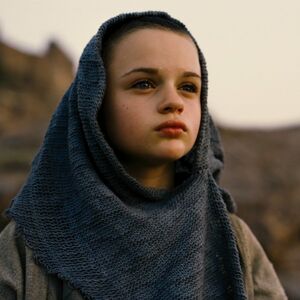 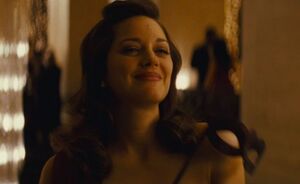 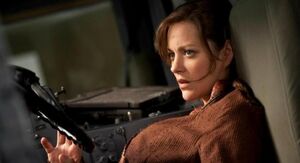 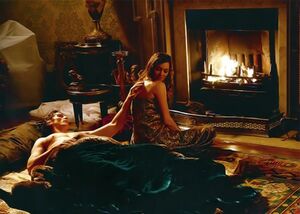 Talia after having sex with Bruce Wayne at Wayne Manor 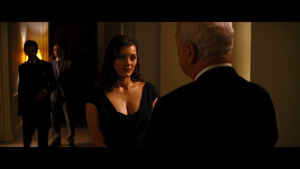 Talia as Miranda Tate at a Fundraiser on Harvey Dent Day

Talia looking at Bane and Batman after their fight 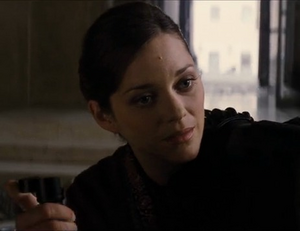 Talia with the bomb trigger

Talia revealing herself, and her Evil Grin 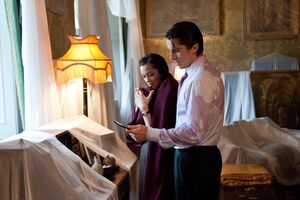 Bruce and Talia at Wayne Manor

Retrieved from "https://villains.fandom.com/wiki/Talia_al_Ghul_(Nolanverse)?oldid=3527870"
Community content is available under CC-BY-SA unless otherwise noted.