Taliesin is a villain featured in Skullgirls series. He is an elf who can play anything as a musical instrument. His current instrument is a Remote Parasite called Muse. Taliesin has an additional role in the circus, which is to punish those in "Cirque des Cartes" who would think to go against their contract with the Medici family who runs the circus.

As a member of the Cirque des Cartes, Taliesin represents the "Jack". It does not recognize others as people, but rather things, in addition, that objectifies women. Her powers are a game of this.

He keeps a collection of his favorite victims, which elicits jealousy in Muse.

Taliesin is seen briefly during Cerebella's story. Most of what is known about him was revealed when Taliesin appeared as one of the 32 potential DLC characters for Skullgirls after their Indiegogo campaign. He didn't even make it past the first round of voting, but clearly some thought had still gone into what he would be like as a playable character if he was ever created.

During Skullgirls Mobile from Cerebella's origin story, he prepares Regina's second test for Cerebella, Beatrix, and Feng designed to gauge their mental strength. He gives each of them a puzzle box of his own design, and gives them six minutes to solve it and retrieve for him the fragile item inside, a Renoir Egg. However, as Cerebella discovers, he did not specify that the item had to be retrieved in one piece. 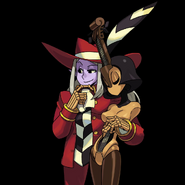