Eat humans in order to avenge their kind (failed).

The Talking Hot Dogs are minor antagonists in the Cartoon Network animated series Regular Show. They appear in the episode "Meat Your Maker" as the main antagonists.

They were voiced by J.G. Quintel, William Salyers, Sam Marin, and Mark Hamill. While the leader was voiced by Tim Curry.

When Mordecai and Rigby ruin the hot dogs for the big park BBQ they go to the freezer to find more to replace the ones they ruined.

After Rigby gets them locked themselves in the freezer and Mordecai gets knock out from all the cold air, Rigby finds a box containing the talking hot dogs. After Mordecai wakes up the Talking Hot Dogs tell them that they know a way out of the meat locker unless Mordecai and Rigby can bring them to a BBQ to be eaten, claiming that they have been longing for the chance to be eaten, and Rigby agrees to take them to the park BBQ, but Mordecai was not so sure.

An icebox then appears and acts as a portal leading to the outside and the BBQ table. They prepare the hot dogs just when Benson, Skips, and Pops arrive and are about to begin, when suddenly the Talking Hot Dogs start attacking everyone.

They also made a brief appearance in "Exit 9B" when Garrett Bobby Ferguson Jr. used a portal to summon the villains from previous episodes, calling the protagonists cowards and that they will die tonight. However, they are never seen for the rest of the episode, including the war. They are then sent back to Hell. 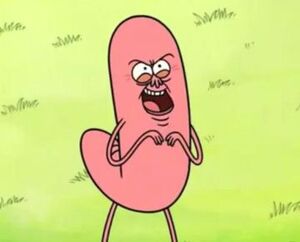 The Talking Hot Dogs with Rigby 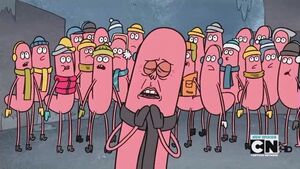 The Talking Hot Dogs in the cold room 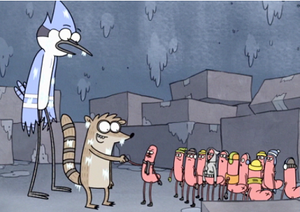 The Talking Hot Dogs becoming friends with Mordecai and Rigby 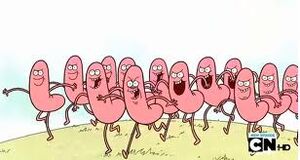 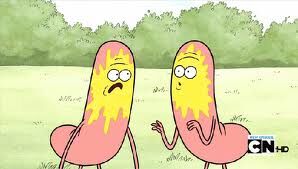 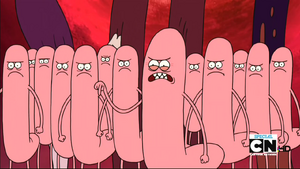 The Talking Hot Dogs in the episode Exit 9B