Talos are moving statues and supporting enemies in God of War series.

Bronze Talos is a minor enemy in God of War III. Bronze Talos are giant, living bronze statues that weilds a giant club.

In the game, Kratos encounters them in Poseidon's Chamber. The Bronze Talos are very similar to the Stone Talos; being both strong, but very slow. If the Bronze Talos receives any damage. it begins to heat up. The more damage he receives, the more he heats up. The more heat up Talos become the more pieces Talos' loses. After finally looses six pieces on it's body, Kratos can use the Talos' giant club and smash the Talos in pieces. Kratos also encouters several more inside the Labyrinth.

Stone Talos often hide in plain sight as statues or parts of the scenery. They only activate when there's a threat among them. They were created by the Gods for the sole purpose of killing Kratos. Taloses are known to be incredibly strong, but very slow. If Kratos weakens the Talos' armor enough, he can use their own hammer to destroy them. Kratos encounters the Stone Taloses in multiple areas. He first encounters some Taloses in the pit of Tartarus, shortly after meeting Hephaestus. Two more on Cronos and lastly in the garden of Olympus.

Fire Talos are first Elemental Talos to be encountered. Their face and raster at their stomach glow red from the fire that burns inside them. From the moment they are activated, their hammers also start glowing red. They slam their hammers in front of their feet to make small fire explosions on the ground towards their enemies. Fire Talos can spring into the air and plummet down to earth in a ball of flames.

Ice Talos are second Elemental Talos to be encountered. Their face glows blue when activate, just like their hammers. They can create an ice wave that comes out of their helmets and hits anything in front of them. As they smash their hammers in the ground, they create huge ice crystals growing out of it.

The Thunder Talos are third and last kind to be fought. Their face and hammers glow yellow. They can charge their hammers with electricity and dash them forward, electrocuting and pushing their enemies back. Their special attack is creating a thunder shield around themselves, damaging everyone who comes too close. 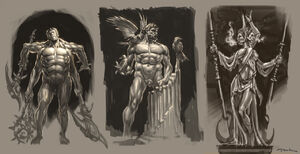 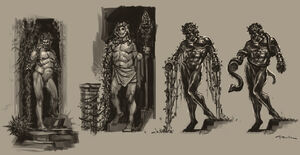 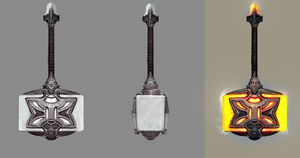 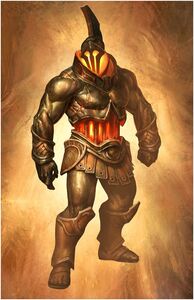 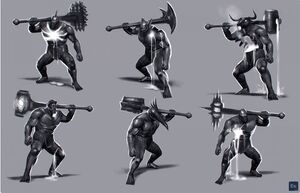 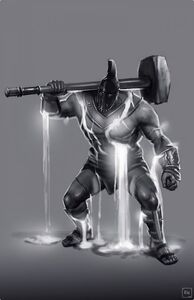 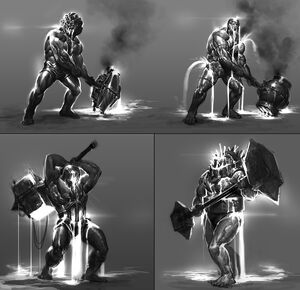 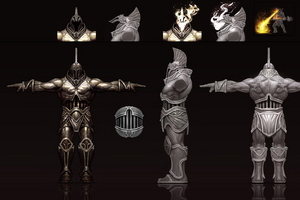 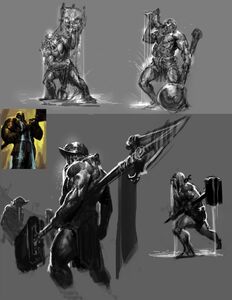 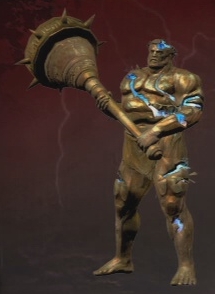 Retrieved from "https://villains.fandom.com/wiki/Talos_(God_of_War)?oldid=2845725"
Community content is available under CC-BY-SA unless otherwise noted.