Plotting his return to joining the Skrull Empire.

Use any means necessary to regain his honor in the eyes of Skrull Empire and rejoin them in their campaign (ongoing).

Talos the Untamed is a villain the Marvel Comics. He is a Skrull who was born without the ability to shapeshift but gained cybernetic enhancements to become one of the empire's most feared warriors.

Talos was born without the common Skrull ability of shapeshifting. However, he easily compensated for this by becoming one of the most feared and respected of Skrull warriors within the Empire. This reputation earned Talos the nickname of "Talos the Untamed".

Unfortunately for Talos, his reputation as the Untamed was lost due to his capture by the Kree during the Kree-Skrull War and his unwillingness to commit ritual suicide to keep his honor, in the face of capture by the enemy. Now Talos is known throughout the Skrull Empire as a shame and disgrace to the Skrull name, he also has been branded by the Empire with his new nickname of Talos the Tamed.

The Impossible Man invited himself and various other aliens to Rick Jones and Marlo Chandler's wedding in Las Vegas. Talos was among the many extraterrestrial guests. However a Kree spotted Talos and taunted him. Talos went to face the Kree antagonist but the Silver Surfer told him to sit back down. Talos depressingly threw himself from the the hotel roof after the wedding. The Hulk thought he was trying to commit suicide, but Talos then attacked the Hulk. Talos believed the Hulk would be a worthy enough warrior to be the instrument of his demise, finally giving him an honorable death. However when the Hulk realized what the Skrull was doing, he tried to leave the scene. Talos attacked again, trying to provoke the Hulk into fighting back. Tempted to give the Skrull what he wanted, but loathed to disappoint his bride, Hulk begged the Skrull to leave him alone. This convinced him that the Hulk was a coward and unworthy of his attention. Talos teleported himself back to his orbiting spacecraft, where he found that his fellow Skrulls were impressed by his performance.

Talos was deemed no use for Queen Veranke's Secret Invasion of Earth because of his lack of shape-shifting abilities, Chancellor Kal'du never lost hope that Talos would eventually join them on Earth.

Talos traveled to the planet Godthab Omega and in the town of Abyss, he battled Devos the Devastator. Devos managed to defeat Talos, but was struck down by Gamora. Talos and Devos were imprisoned in the same cell by Glorian, the one responsible for drawing them to the planet. Talos spoke with Devos, believing that Glorian was once a pupil of the Shaper of Worlds. When the planet was overrun by the Annihilation Wave, Glorian was distracted, releasing Devos and Talos. Ronan the Accuser ordered the two of them off-planet with the other survivors. Though he hated the Kree he decided to comply to save his life.

Talos joined the United Front resistance that was organized by Nova, and helped defend Daedalus 5 against the Annihilation Wave.

Talos disguised himself as a human named Jonathan Richards using make-up and a fake beard and hired private eye Howard the Duck to retrieve a necklace stolen by the Black Cat. With the help of Tara Tam, a new ally, Howard managed to recover the necklace. After recovering the necklace for a third time, Howard was approached by Talos disguised as Richards in the middle of his fight against the Ringmaster, Richards revealed his true identity.

It was revealed the necklace contained one of the Abundant Gems, a set of stones marginally powerful items Talos wanted to use to enslave the Earth and regain his honor in the eyes of the Skrull Empire. Talos found the final gem in the former site of the Pier Four, and unleashed the constructs known as the Abundant Warriors to wreck havoc in the city. Tara Tam, who was revealed to possess shapeshifting powers similar to a Skrull, posed as Emperor Kl'rt and distracted Talos long enough to let Howard steal the glove from his hand. He was subsequently apprehended by the Fantastic Four.

Talos is a major character of the 2019 Marvel film Captain Marvel, portrayed by Ben Mendelsohn. However, this particular version of the character is portrayed as an anti-hero rather than a villain as he is more concerned about the well-being of his species by finding them a new homeworld to be safe from the ruthless Kree Empire led by the Supreme Intelligence. Also, unlike his original counterpart, he has the ability to shapeshift himself as he was able to masquerade himself as former S.H.I.E.L.D. director Keller. 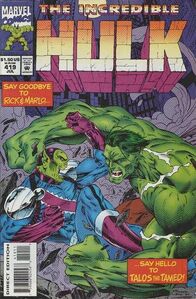 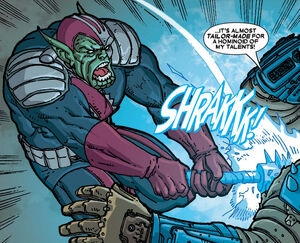 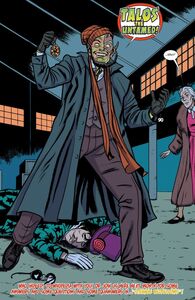 Talos revealing himself as "Jonathan Richards". 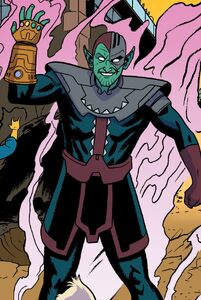 Talos' evil grin, as he wields the Abundant Glove 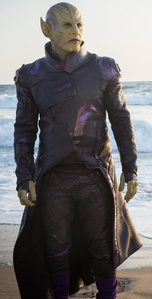 Talos in the 2019 Captain Marvel film. 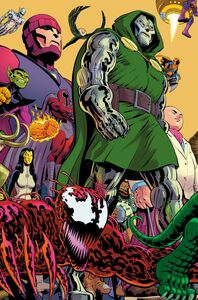