The Talosian Keeper has the distinction of being the first villain filmed (but not aired) in the history of Star Trek.  He first appeared in the originally unaired pilot "The Cage," and then again in "The Menagerie" (which was comprised of a majority of the footage from the prior episode).

In his initial Star Trek appearance, he was portrayed by Meg Wyllie (in the original series, all the of Talosians shown were played by women even though they were all male characters). In "The Cage", Meg Wyllie's voice was edited out and dubbed over with Malachi Throne's voice. However, in "The Menagerie," Wyllie's voice was restored, and Throne portrayed Commodore José Mendez. In his appearance on Star Trek: Discovery, he was portrayed by Rob Brownstein.

Centuries of war left Talos IV desolate and incapable of sustaining life.  As a result, the Talosians retreated underground and developed their psionic abilities.  However, the use of their abilities became addictive, and the Talosians took to abducting members of other species.

Encounter with the Enterprise

In the year 2254, the Enterprise, under the command of Captain Christopher Pike, receives an 18 year old distress signal from the deep space ship Columbia, which crash landed on Talos IV.  Upon investigating, however, the crew discovers that the survivors were only an illusion to lure the crew to the planet.  In actuality, the only survivor was a woman named Vina, whom the Talosians had been keeping in captivity since the crash.

The Talosians abducted Captain Pike and held him in prison and attempted to artificially create a romantic attraction between him and Vina by inserting her into a re-enactment of a combat incident Pike had previously had on Rigel VII.  Once the battle was over, Pike began asking Vina about their captors and their intentions.  When Vina was telepathically "punished" for overstepping her bounds in revealing too much and attempting to seduce Pike prematurely, Pike realized that Vina was real, as opposed to yet another illusory creation he previously suspected her of being. (She was not actually punished but told to retreat by the Keeper so they could try a different approach).

Subsequently, the Keeper gave him a glass of liquid nourishment, offered to give it the illusory form of any food he wished, and punished him for refusing it.  After drinking the liquid, Pike then surprised the Keeper by allowing himself to become completely angry while attempting to break through the transparent barrier.  Refusing to even address the Talsoians' weakness against negative, primitive emotions, the Keeper changed the subject to reveal their rationale for abducting Pike: As the sole survivor of the Columbia crash, the Talosians thought it appropriate to attract a mate for Vina, and believed they had found a suitable companion in Pike, which Pike conjectured was just a prelude to creating a human community to serve as the Talosians' slaves.  Once Pike was angered by the suggestion, as well as the Talosians' willingness to punish Vina for their own purposes, he attempted to provoke the Keeper into punishing him instead of her.

Taking his new sympathies towards Vina as a sign of progress, the Talosians proceeded to deepen Pike's relationship with Vina through two other environments: one at Pike's ranch in Mojave, California, and another at an Orion slave colony (with Vina portrayed as an Orion slave girl).  Pike resisted, however, and the Talosians abducted two female Enterprise crew members as alternative mates for Pike: Number One and Yeoman J.M. Colt.  Pike resisted these efforts as well, eventually managing to escape by shooting a hole in the cell transparency (and threatening to likewise shoot the Talosian if he didn't remove the illusion that he had failed to do so).

Once they arrived at the planet surface, Pike offered to stay with Vina if the Keeper would allow Number One and Yeoman Colt to return to the Enterprise.  Number One, however, threatened to overload a phaser, killing all of them, to prevent the Talosians from breeding Pike and Vina together and using their offspring as slaves.

Conferring together, the Talosians concluded that humans have a violent resistance towards captivity and were thus unsuitable to be kept on Talos.  Number One and Colt were returned to the Enterprise, but Pike remained just long enough to learn Vina's rationale for remaining - she had been severely disfigured in the Columbia crash, and although the Talosians were able to repair her injuries to keep her alive, they were unable to restore her appearance except through illusory means.  The Talosians allowed her to remain with a telepathic copy of Captain Pike, and the real Pike was allowed to return to the Enterprise. 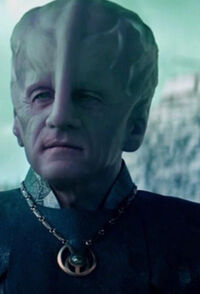 In 2257 Michael Burnham brought a mentally disabled Spock to Talos IV. Still leading the Talosian people, the Keeper offered to repair Spock's mind in exchange for Burnham's memory of the cause of the conflict between her and Spock.

Using their abilities the Keeper and the other Talosians quickly determined that Spock had attempted a mind meld with the being called the Red Angel, and as a result was not experiencing time in the normal fashion. They were able to help Spock come back to reality.

As of 2257 Talos IV was considered restricted space. In the intervening years, Pike's account of the mission plus Burnham and Spock's time there led the Federation to issue General Order VII, forbidding any visit to Talos IV under any circumstances.  When Pike suffered his own crippling injury, however, the Talosians learned of this and contacted Lt. Cmdr. Spock and requested he bring Captain Pike to them.

Against Pike's wishes, Spock commandeered the Enterprise (now under the command of James T. Kirk) and used her to transport Pike from Starbase 11 back to Talos IV. Spock and the Keeper staged a fake court-martial for Captain Kirk and Commodore José Mendez to recount the events of the original Talos IV mission (and to stall for time to allow the Enterprise to arrive at Talos). Mendez from his starbase learned what Pike had earlier experiences and the Talosians intentions and suspended General Order VII for the transportation of Captain Pike to Talos IV.  Upon entering orbit, the Keeper telepathically communicated with Captain Kirk to invite Captain Pike to spend the rest of his days with Vina and the Talosians.  Pike accepted the invitation. Upon beaming to the surface Pike was telepathically granted the illusion of full health and strength.

In the years that followed with Pike's assistance the Talosian race finally began taking steps to reclaim their homeworld. In the early 24th century Vina died due to her advanced age, and Pike followed soon afterwards. Pike had the Keeper contact Spock to summon him to Talos IV to witness the progress the Talosians had made, and to return some of his ashes to Earth for burial.