Tamae Sakuma, also known as the Chameleon Zodiarts, is an antagonist in Kamen Rider Fourze. She is one of the Zodiarts.

She was portrayed by Maria Yoshikawa.

Tamae competed against her friend Miu in the Amanogawa Queen Festival contest. Plotting to remove Miu from the contest, Tamae uses her Zodiarts powers to attack students that could compete against her. Later, when Miu took the stage for the talent competition, Tamae faked being attacked herself before transforming and causing a commotion, allowing for a video of Miu excoriating the student body to play. After her identity as the Zodiarts was revealed, Tamae faked being sorry to catch Miu off guard and injures her to keep her from competing in the contest. However, despite being injured, Miu returns to the school and gives a powerful speech that wins back the approval of the student body.

Furious that her plan has failed, Tamae ignores Kengo's warnings and uses her Zodiarts Switch in its Last One state, transforming into the Chameleon Zodiart to attack Miu, but Kamen Rider Fourze defends Miu and defeats the Zodiarts with his Rider Rocket Drill Kick, disabling the Zodiarts Switch.

After Miu won the contest for the third year in a row, she became friends with Tamae again and makes Tamae the promise that she would beat Miu fairly. 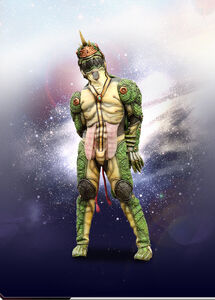 Chameleon Zodiarts
Add a photo to this gallery

Retrieved from "https://villains.fandom.com/wiki/Tamae_Sakuma?oldid=3541676"
Community content is available under CC-BY-SA unless otherwise noted.