Owner of Damo Can cleaning service

Leader of the Damokan Group

He is originally introduced as Hato Higashikata's boyfriend, but this is later revealed to be an act to infiltrate the Higashikata House, and he is actually the leader of the Damokan Group in the Locacaca Organization, a Rock Human, and a a Stand User, using the Stand known as Vitamin C.

Originally born through the standard method of Rock Human birth, Tamaki Damo took his name from a unknown figure, likely after killing him. Through this new name, Damo was able to set up his cleaning shops as well as dealing Locacaca to the rich and powerful.

Later on, on August 19, 2011, Tamaki Damo and his minion Yotsuyu Yagiyama ambush Yoshikage Kira's boat. Both he and Josefumi attempt to fend off the man, but are quickly defeated due to Vitamin C. Knowing the two stole branches from him to grow their own Locacaca, Tamaki Damo interrogates and tortures them for their motives why they stole his Locacaca branches and exclaiming that he would spare one if they weaseled on the other's plan. Josefumi and Yoshikage Kira later escape his wrath, and both later posthumously fusing to become Josuke Higashikata.

Tamaki Damo's first on-screen appearance has him be introduced to the Higashikatas as Hato's boyfriend, with most of the family surprised that Hato would date someone as strange-looking as Damo. Damo would give Norisuke a box of chocolates, but not without him and Kei Nijimura noting of the strange stickiness with his fingerprints and the scratched handprints near the door.

During this visit in the Higashikata's household, Damo would slowly pick off the family using Vitamin C, silencing Kei, Joshu, and Daiya while also sending Hato away, leaving him alone with Norisuke to be interrogated and tortured on the murder of Yotsuyu Yagiyama, the A. Phex Brothers, and Aisho Dainenjiyama, which he does. After Norisuke cracks under Damo's threat to kill his family and he reveals him info on Josuke and Josefumi, Damo is challenged by Josuke and Hato to free their family. Hato survives Vitamin C's attack through Soft & Wet's bubbles, and saves Josuke from Damo by using Walking Heart to attack Damo.

As much of a coward as ever, Damo tries to set a trap using the melted Norisuke to set a lose-lose scenario where either the father burns or Hato saves her father and be affected by Vitamin C. Regardless, this plan fails as Soft and Wet provides a beacon to Damo's location and allowing Hato to delivering another assault on Damo. Now stabbed through the skull, Damo escapes the house and tries to bargain with Josuke on the warpath for him with the promise of healing Holly with his surplus of Locacaca. This offer falls flat, as Damo is delivered one final blow to the head by Soft & Wet, killing him.

Damo is originally introduced as a polite, although awkward individual, later revealed to be a front, his true personality revealed while interrogating Norisuke. Knowing that his ability has little range, he attacks his opponents in a space he knows they would be trapped in. He enjoys ordering his victims, but still gets to his objectives. Damo enjoys sadistically torturing his victims, even recording them for his own enjoyment, and inserting objects into them. Damo also has a tendency to cut off his victims' limbs if they do not follow his orders.

Damo is also manipulative, easily seducing Hato for the sole purpose of infiltrating the Higashikata House. Damo exploits his opponents' pressure points to gain advantages in his current situation.

Additionally, Damo is also quite short tempered, being enraged easily by things such as being underestimated, playing dumb, or whenever he thinks information is being kept from him. He has no qualms about torturing, or killing all of his opponents. However, he also acts cowardly whenever his life is on the line, begging Josuke to team up with him and claiming that he would heal his mother.

With Vitamin C, Tamaki Damo is able to turn anyone who touches his or his Stand's fingerprints into melted piles of goo, making them unable to fight back. This allows them to be easy pickings for Damo to do whatever his wicked plans to them are, be it slicing them to pieces or adding other things into their bodies. Damo also is able to control the pace on which one melts away, with him showing a slow burn towards Josuke and quickly turning Hato to be under his Stand's effects. The Stand is not perfect however, as it only works to its fullest in a small, enclosed area with no hope of someone escaping his radius and restoring themselves, and it doesn't show any notable physical expertise. 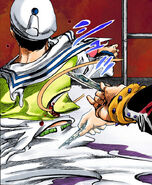 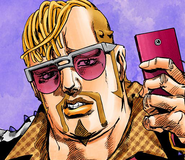 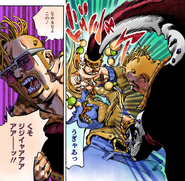 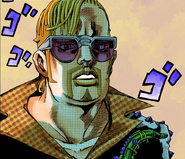 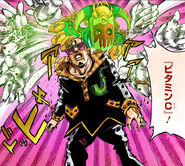 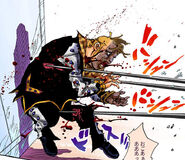 Tamaki Damo's demise.
Add a photo to this gallery

Retrieved from "https://villains.fandom.com/wiki/Tamaki_Damo?oldid=4126081"
Community content is available under CC-BY-SA unless otherwise noted.