Tamami Kobayashi is a minor villain from the fourth arc of JoJo's Bizarre Adventure, Diamond is Unbreakable. He is introduced as a confidence trickster who leads Koichi to believe that he had run over Tamami's cat with his bike – supposedly hidden in a bag which then splattered with blood. Despite that odd circumstance being questioned, Tamami demands a sum of money from Koichi as a compensation for the deed. He successfully pressures Koichi into feeling guilty, which puts his stand, The Lock, into action. As its name implies it is a stand in the shape of a lock which clasps over the target's heart and grows the more guilty its captive feels.

Tamami explains he got his powers 4 months ago from Keicho Nijimura; he reveals that he intends to use his powers to gain wealth and never have to work again. As he is bullying Koichi, Josuke and Okuyasu turn up and try to help their friend. Okuyasu punches Tamami, breaking his teeth and as a result feels guilty for it – which gets him a lock around his heart as well. Josuke then reveals that it was just a doll instead of a cat that was hidden in the bag and heals Tamami, thus freeing Koichi and Okuyasu from their guilt and Tamami's stand.

Tamami returns the money he had taken from Koichi but vows to get revenge. When we next see him he is at Koichi's house, talking to his mother. He explains that he is here to return Koichi's wallet and claims that Koichi has intentionally switched it with his, as Tamami's holds 500,000 yen. When Koichi's mother doesn't believe him, he tells her that there is a stub of a restaurant he went to inside of the wallet Koichi holds. His words were proven true thanks to a trick, leading Koichi's mother to feel guilty about her son and giving Tamami an opportunity to place The Lock on her. Koichi, enraged, attacks him, leading in turn for his sister to feel guilty as well to Tamami's advantage. Tamami deceives Koichi's two family members into feeling guilty further, causing them to fall under the highest level of The Lock's power – severe enough to have them attempt suicide. Finally, Koichi manages to convince his mother that he is innocent of the crimes Tamami had framed him of, by using his stand Echoes to amplify his plea for her to believe in her own son's words. This destroys the Lock and Tamami knows he has been defeated. From then on he respects and fears Koichi and even takes to calling him Boss Koichi.

After his defeat, Tamami reformed and took on a job of debt collecting. Later in the story Tamami briefly takes on the role as a juror when Josuke and Rohan gamble against each other during the dice game "18". 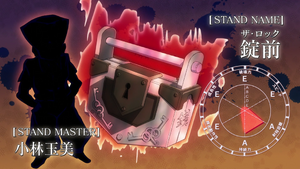 The Lock
Add a photo to this gallery
Retrieved from "https://villains.fandom.com/wiki/Tamami_Kobayashi?oldid=3225720"
Community content is available under CC-BY-SA unless otherwise noted.