Consort of the Emperor

Servant of the Court

Causing misery and destruction around her.

Become the Ruler of Japan (failed).

Tamamo no Mae is one of the most infamous antagonists of Japanese folklore. She is classified as one of the Nihon San Dai Aku Yokai, better known as the three evil Yokais that plague Japan along with Shuten-dōji and Emperor Sutoku. She is an evil nine tailed fox spirit or better known as a Kitsune, who causes chaos and mayhem across the world by disguising herself as a concubine of several certain kings, and also responsible for triggering the civil war that happened in Japan.

Her story is also appeared in several other forms of media, and inspired several villains such as Da Ji from the Chinese epic known as Fengshen Yanyi. To this day, Tamamo remained as one of the most iconic characters from Japanese folklore.

Most of the time, Tamamo was depicted as a rather beautiful and yet seductive woman. However, her most distinguishable trait is that she is described as a white faced and golden furred nine-tailed fox spirit, who can change her appearance as her will to evade several suspicions when she visits other countries such as China, India and at the very least Japan.

Despite her beautiful appearance and her intelligence that made several people enamored by her, Tamamo is revealed to be a wicked being who loves to revel at the suffering in others. This was shown during her days as a concubine for several emperors across the world including King Zhou and King You from China and King Kalmashapada from India as she manipulated several kings committing depraved acts and also spreading several suffering towards other innocent people on her own volition on daily basis.

Tamamo is also shown to be a rather ambitious woman as this was shown on her trying to overtake the Heian Empire by seducing the emperor with her seemingly fake kindness, beauty and intellect and backstabbing him behind the shadows by shortening his lifespan that resulted in him dying a year later. Her ambitions were also shown during her days as Bao Shi as she manipulated King You to depose his own wife just to become a new consort in China and tried to cause suffering towards others that live in China.

Tamamo is also extremely intelligent and seductive as she managed to charm other people, including the kings, to bend to her will. This was shown where she becomes Mizukune, her extreme intelligence made the Emperor of Japan during that time, Emperor Toba, captivated by her charm to the point she made Tamamo as a servant of his court. In addition to all of this, she managed to escape harm and even outwitted several warriors who tried to capture her before meeting her impending doom.

Not much is known about Tamamo no Mae's early life, as she is a woman shrouded in mystery. However, records said that she was born 3.500 years ago in ancient China. As hundred years passed, she had become a powerful sorceress and transformed herself as a beautiful white faced nine tailed fox with golden fur. With her manipulation and charming skills, she manages to seduce several kings to her side in order to make herself well known in several world affairs and control it from the shadows.

During the Shang Dynasty, she was known as Da Ji, the concubine of King Zhou of Shang. During the reign of King Zhou, Tamamo is revealed to be behind the misfortunes and depravities that happened in the kingdom which resulted in the Shang Dynasty facing it's imminent destruction. This is due to the fact that Tamamo herself has a track record on spreading human misery such as holding orgies in the palace gardens or inventing several innovative yet excruciating torture methods just to hurt others. As the Shang Dynasty began to crumble due to Tamamo's machinations, she was initially going to be executed. However, due to her wits, she managed to escape to India around 1046 BCE.

Escaping to India, she then disguised herself as Lady Kayo and began to seduce King Kalmashapada—better known as Hanzoku in Japan—who is the ruler of Magadha Kingdom located in India. Similar to what happened during the Shang Dynasty, Tamamo enthralls King Kalmashapada to do several depraved things such as cannibalizing his children, massacring several innocent priests, making the king beheading one thousand innocent men and committing other unspeakable horrors. However, legends say that due to either running out of resources to eat or Kalmashapada began to convert himself into a Buddha, she then fled to China.

Returning to China again during 779 BCE, she then changed her identity to Bao Si and seduced the king of the Zhou Dynasty, King You, with her extraordinary beauty to become the king's consort. However, due to Tamamo's ungratefulness, she then manipulated the king to depose his wife, Queen Shen, and make Tamamo as the brand new queen. After becoming the queen, Bao Si then faked her emotions by rarely smiling in order to manipulate the king which resulted in him committing more and more depravities just to please Tamamo who rarely smiled. Eventually, the king was killed due to the atrocities that he had committed and Tamamo was captured. Unsurprisingly, she managed to evade execution while hiding from the public for many years.

In the year 700, Tamamo then manages to trick three of the Japanese envoy of the Tang Dynasty, Kibi no Makibi, Abe no Nakamaro, and Ganjin, by disguising herself as a 16 year old girl named Wakamo and this resulted in her getting a free ticket as the three envoys prepared to go home to Japan as she remained there until 300 years with the three envoys didn't know that she will be responsible of the bad things that will happen in the future.

As Tamamo no Mae's story reached the year 1090, Tamamo transformed herself into a human baby and was adopted by a married couple after they found her in the streets. She was named Mizukume and grew into a beautiful and intelligent girl. As she hit seven years old, she then recited some poetry towards the emperor which resulted in Tamamo becoming the servant of the Emperor court as her intelligence grew more and more like a sponge absorbing water and her beauty became unparalleled which captivated all of the people across Japan.

As she hits eighteen years old, a poetry and instrument recital was held in order to honor Mikuzume. However, during the recital, a horrible storm struck the palace as the candles in the castle went out. Suddenly however, Mikuzume's body illuminated the room which captivated the people who were present in the ceremony, making them assuming that Mikuzume was actually a reincarnation of a benevolent person in her previous life which in reality, she is an evil empress that is responsible for the destruction of several empires in the past across the world. However, due to the incident, this made the Emperor of Japan, Emperor Toba, interested with her beauty and intelligence to the point she gave Mikuzume a name, Tamamo no Mae, and was made as a consort. However, after Tamamo no Mae married Emperor Toba, the latter was struck with a horrible illness that was seemingly unsolvable by the court physicians. During that time, Abe no Yasunari was called to the palace in order to diagnose the Emperor's illness.

As Abe no Yasunari read the fortune of Emperor Toba, it was soon revealed that he was struck by a bad omen and the person who is responsible of the king's downfall was none other than Tamamo no Mae herself much to the king's horror as she tried to shorten the lifespan of the Emperor in order to become the ruler of Japan. Initially, the Emperor refused to believe what Abe no Yasunari had said. However, he decided to let Abe no Yasunari to test Tamamo in order to prove that Tamamo was still a benevolent person on the inside and not the cause of the Emperor's downfall.

In order to save the Emperor's life, Abe no Yasunari then prepares a powerful ritual known as Taizan Fukun no Sai in which Tamamo was persuaded by the priests to participate. Initially, Tamamo rejected the offer because she is aware that the ritual could potentially kill several evil spirits. However, she had no choice but to participate because if she succeeded to do so, it would increase her reputation towards the people in the court. As Tamamo no Mae participated in the ritual, she dressed more beautifully than normal and played her part extremely well. However, as soon as she waved the ceremonial staff, she vanished which not only confirmed Abe no Yasunari's prophecy, but also flung the court into a state of panic.

After Tamamo no Mae seemingly disappeared without a trace, news had struck across the country saying that several innocent women and children were missing near the Nasuno no Shimotsuke province and it was heavily implied that Tamamo was responsible for the cause of this disappearance. This resulted in the Emperor summoned all of the best warriors in the country in order to stop the fox spirit's reign of terror. One of those warriors was revealed to be Kazusanosuke and Miuranosuke who were the strongest of them all. As the two prepared to find Tamamo no Mae and stop her reign of terror, they purified themselves and was accompanied by 80.000 armed men in order to slay the fox.

One night, Miuranosuke received a dream about a beautiful young girl begging to be saved by the warrior. However, knowing it was one of Tamamo no Mae's tricks, he declined her offer. After waking up from his dream, Miuranosuke and Kazusanosuke then continue to try their best to find the fox spirit until they manage to do so. As the battle between the two warriors and Tamamo commenced, the two managed to defeat her once and for all as Miuranosuke fired two arrows towards the evil fox and Kazusanosuke swung the blade to slay the fox. Killing her once and for all.

However, despite her death, Tamamo no Mae's horrors didn't end there as one year later, Emperor Toba died thanks to Tamamo no Mae's machinations while the other Emperor died while living heir. This sparked a civil war between the forces that were loyal to Emperor Go-Shirakawa and forces loyal to former Emperor Sutoku which also resulted in Fujiwara-Minamoto rivalry that led to a civil war. It was also told that Tamamo no Mae's spirit also haunted a massive boulder called the Sessho-Seki that killed every living being that came into contact with it. 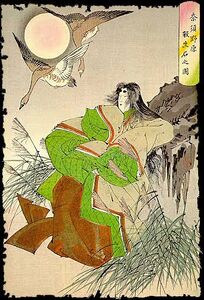 A woodprint of Tamamo no Mae by Yoshitoshi Tsukioka. 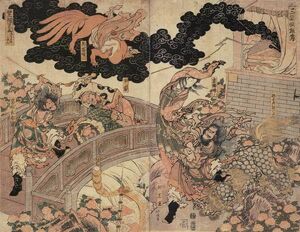 The Story of Lady Kayo depicted in Hokusai's Sangoku Yōko-den. 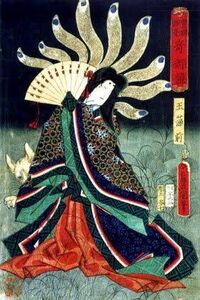 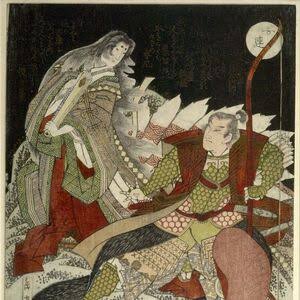 Tamamo no Mae during the final battle against Miuranosuke before meeting her death. 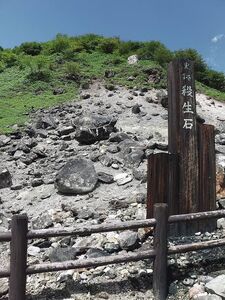 Sessho-seki, the boulder where Tamamo no Mae's soul was sealed. 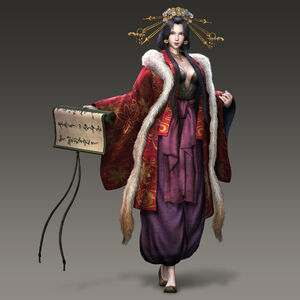 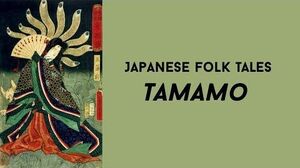 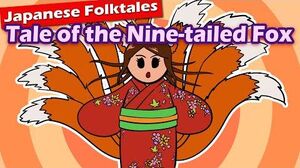 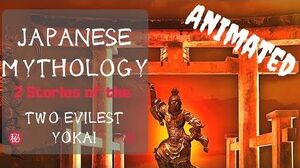 Japanese Mythology Two Animated Stories of the Most Evilest Yokai