Hunting down fighters and assassinating them.

Eliminate any martial artists that could threaten his father and kill Goku.

Tambourine is a supporting antagonist in the Dragon Ball series. He is the secondary antagonist of the King Piccolo saga and one of his sons.

Piccolo Daimao spawned Tambourine shortly after his release at the hands of Emperor Pilaf. He was sent out in order to kill any of the martial artists that entered the previous two Tenkaichi Budokai tournaments and therefore get rid of anyone who could learn how to use the Mafuba wave, the technique that sealed Piccolo in a rice cooker during his previous reign of terror, which the Namekian believed was the only thing that could defeat him. Tambourine was also instructed to bring back any Dragon Balls that he found along the way. His first victim is Krillin, whom he encountered at the end of the 22nd Tenkaichi Budokai and easily managed to kill the boy with a kick to the head that snapped his neck. The mutant Namekian then stole the Four Star Dragon Ball, along with a list of all the contestants.

Tambourine was later confronted by Goku, who sought to seek his vengeance on Tambourine for murdering Krillin. He easily managed to defeat Goku, because the boy was weakened from his fight with Tenshinhan. Tambourine proceeded to beat the boy senseless, leaving for him dead, and destroyed his source of transport, the Flying Nimbus. The mutant Namekian went on to kill more tournament fighters like Giran, Bacterian, King Chappa, and many others. Before Tambourine could eliminate Yamcha, he received a telepathic message from Piccolo to find and destroy the person responsible for killing another of Piccolo's spawn Cymbal.

Tambourine was successful in tracking down Yajirobe, who had killed Cymbal, but when Goku appeared, the mutant became more interested in fighting Goku first. Tambourine started the match, confident he could win again. This time however, Goku managed to pound Tambourine into the ground and when he attempted to escape, Goku killed him with a Kamehameha wave, finally avenging Krillin's death.

Tambourine is an extremely powerful fighter and is able to use a variety of techniques, as well as manipulate energy like many other Dragon Ball characters. His numerous techniques include Sidearm Flamer, a technique where he charges his hand with energy, before impaling his opponent with it, the Chou Makouhou, a powerful energy blast fired from the mouth that is used by Piccolo Daimao and his offspring, and the Wah-Tah Kick, a stereotypical deadly kung fu kick. Tambourine can also fly using his wings.

Much like his father, Tambourine is extremely sadistic, and cold-hearted. He loves slaughtering innocent humans because he sees them as being inferior to him and his father's kind. Tambourine will kill people who are not part of his assignment just for fun. He is also intelligent and strategic-minded, using an extensive vocabulary and being able to fight and kill with high skills. He is very murderous, like when he killed several tournament fighters, including Krillin.

Despite being psychopathic, when facing an opponent much stronger than him, he is a coward. During his second fight with Goku, he thought he destroyed with a big ki blast, but it had no effect on the Saiyan. Tambourine then tried to escape, but could not escape Goku's wrath. 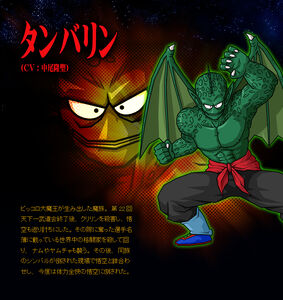 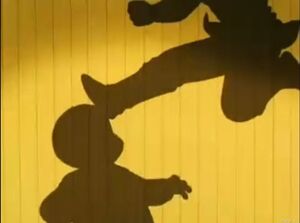 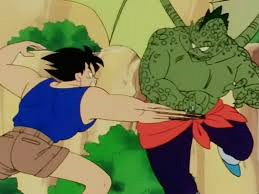 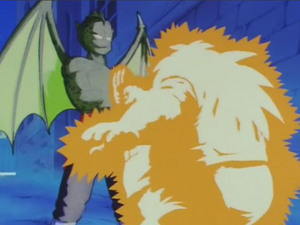 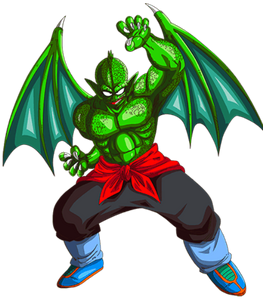 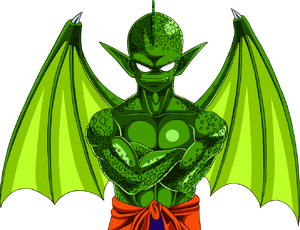 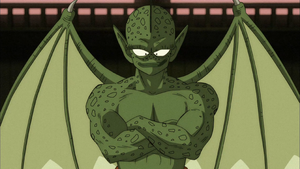 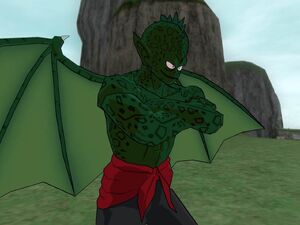 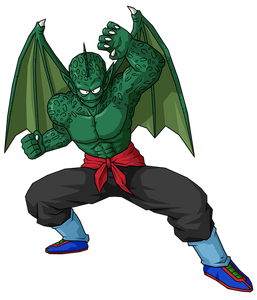