Eliminating all known threats to the Galactic Federation.

Capture or kill any threats to the Galactic Federation (temporarily succeeded).

Kill Rick, Morty, and the rest of the Smith family (failed).

She used to be a student at Harry Herpson High School and a close friend of Summer Smith, but was revealed to actually be an undercover agent and spy for the Galactic Federation at the wedding between herself and Birdperson, whom she betrays and kills. Following the destruction of the Federation at the hands of Rick Sanchez, Tammy became the leader of the remnants and established the New Galactic Federation.

She was voiced by Cassie Steele.

She appears at the party and has one of the guests, Chad, mess up her hair so she can appear drunk and meets Birdperson while at the party. She starts talking to him despite him being apprehensive about Tammy's desires and tells her that he's not looking for someone to soul-bond with. Tammy, however, whispers something into his ears to which Birdperson replies by saying that he can "arrange something" and she ends up going home with him after the party is over. In the episode "Get Schwifty", Tammy appears in Birdperson's home wearing nothing but a robe, implying that their relationship had continued, and makes a sly innuendo that makes Birdperson uncomfortable and later watches the events being transmitted on Earth in horror.

Tammy makes her second major role in the season two finale "The Wedding Squanchers" where she's getting married to Birdperson and holds a reception to celebrate the occasion. During the event however, Tammy stands up and reveals herself to actually be an agent of the Galactic Federation and proceeds to shoot Birdperson and has the entire audience put under arrest. A shoot out breaks out and she attempts to kill Rick, but is stopped by some of the party guests who attack other Federation forces sent in and is last seen falling over with Squanchy stepping on her foot. It's also revealed that Tammy parents, Pat and Donna Gueterman, were actually cyborgs and were spies for the Galactic Federation who attack and attempt to kill Beth and Jerry Smith.

After the events of the episode, Tammy survives and her mission was a success as Rick Sanchez was actually imprisoned by the Galactic Federation after he turned himself in to protect the rest of the Smith family and returns to an unknown federation base. During the season three premiere "The Rickshank Redemption", the Galactic Federation is brought down and collapses at the hands of Rick; however, Tammy is revealed to have survived the entire event and is now the leader of the surviving remnants of the Galactic Federation. On her request, Birdperson's corpse is brought back and he's revived as Phoenixperson.

Tammy next makes a cameo in "Never Ricking Morty", where she and Summer are shown in a lightsaber duel; Rick himself states this scene - like many others in the episode - is not canon.

Tammy and Phoenixperson then appear in the season 4 finale "Star Mort: Rickturn of the Jerri", intent on pursuing Beth (or maybe a clone of Beth, that part remains ambiguous) who has now become leader of The Defiance, a resistance movement against the Federation and their most wanted criminal. After Beth retreats to Earth, she leads a second Federation invasion. She is forced to capture the two versions of Beth after finding them together. Tammy is finally killed in a bloody and brutal battle with Rick, who executes her with a headshot. However, he does manage to save Phoenixperson, the last scene of the episode showing Rick holding his friend in his lab in a life support device, determined to fully heal and restore him. 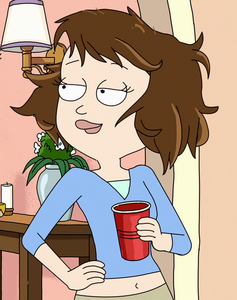 Tammy in her debut appearance 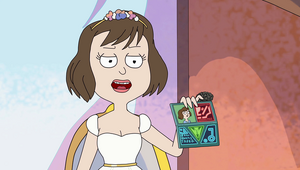 Tammy revealing herself to be a spy for the Galactic Federation 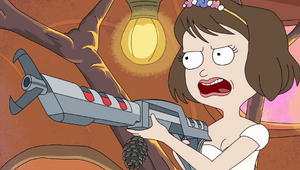 Tammy trying to kill Rick during the Wedding massacre 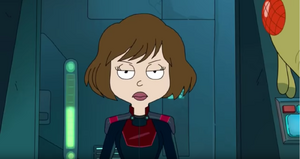 Tammy in her Galactic Federation uniform 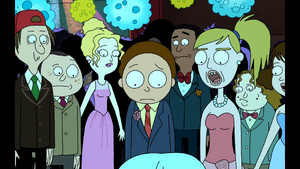 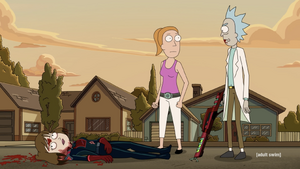