Searching for ways to become powerful

Fighting anyone who stands against her
Mocking her former loved ones

Obtain the power of the Demon Seed

Tamsin Roame is one of the ten main protagonists of the Year of the Dragon expansions of Hearthstone: Heroes of Warcraft, and the only one to have a villainous role. She was originally a human mage from Stormwind and the sister of fellow mercenary Cariel Roame, but was killed by the Scourge and raised into an undead. After regaining free will as a Forsaken, Tamsin turned against the Alliance and joined the Horde, but her hunger for power made her turn to dark magic so she can get her revenge. After she was killed by her sister, Tamsin returned as a lich to rejoin the mercenaries in their faction war in Alterac Valley.

She is voiced by Kimberly Brooks, whom also voices Jasper from Steven Universe and Daisy Fitzroy from BioShock Infinite.

When she was alive, Tamsin was a skilled mage contrasting with her sister's troublemaking personality. Not much is known about her attitude towards her schooling in life, but currently she believes that she was THE best student in the school. Once she became a Forsaken, Tamsin began to despise her own people, believing them to have abandoned her. In her pursuit of vengeance, she gained sadistic joy in torturing others, even her own family. She dedicated her life to getting her revenge on the Alliance, resulting in many innocents to be harmed by her actions.

Tamsin was initially friendly towards her fellow Horde mercenaries whom she met in the Barrens, and was happy to travel with them albeit having a slight jerkish attitude, until her true intentions resulted in them turning against her, so she fought them without remorse. The only exception she makes is towards Guff Runetotem, whom Tamsin was reluctant to fight due to his kind nature (even though earlier she threatened to fire him out of a cannon when he refused to fight), unlike the others whom she discarded her friendship with in an instant.

Tamsin enjoyed tormenting her sister and father, as she constantly taunted Cariel for foolishly believing in her, and tortured her father Cornelius before killing him and turning him into an abomination, calling him her masterpiece. In the end, Tamsin discarded any sympathy she could have received, as she proved to be so twisted that even her fellow Horde companions were disgusted with her obsession towards destroying the Alliance, and Cariel, whom wanted to save Tamsin at first, saw that there was no redemption for her.

In life, Tamsin was the daughter of Cornelius Roame and the older sister of Cariel Roame. She was a prodigious mage who was recruited to join Scholomance Academy by Archmage Antonidas, but the forces of the Scourge invaded and attacked the school. She ended up fighting against the Lich King himself, which resulted in her death. She was raised into an undead, but after the Lich King's defeat she regained her free will and became a Forsaken. Upon being revived, she believed that the Alliance had abandoned her, so she joined the Horde like the other Forsaken. She eventually met Lady Katrana Prestor, who encouraged her to become a warlock. Prestor also told her to go to the Barrens to seek artifacts that would make her powerful.

In the Barrens, Tamsin was confronted by Plaguemaw the Rotting until a group of Horde adventurers consisting of Rokara, Bru'kan and Guff came to save her. After also meeting Varden Dawngrasp, the five Horde adventurers met Kazakus in the Barrens, where they were sent to retrieve naaru shards for him. They eventually approached Feegly the Exiled, whom Rokara was unwilling to kill until Kazakus did so himself. Rokara lamented that killing Feegly would be dishonorable, but her companions including Tamsin congratulated her for sticking to her own code of honor. Tamsin later accompanied her them to the Wailing Caverns, where she helped them defeat the possessed Naralex and break him free of the Emerald Dream's corruption.

Tamsin split up with the Horde mercenaries and was led by Kazakus to Dreadmist Peak, where she encountered Kurtrus Ashfallen alongside her sister Cariel. Initially trying to deny that Tamsin was an evil warlock, Cariel stood in Kurtrus' way as she tried to protect her sister, but Tamsin mocked Cariel's naivety and let Kurtrus defeat her. She laughed at how Cariel fought for her and lost the fight, making the demon hunter call her out for being uncaring towards her sister, which Tamsin reacts with apathy. After the fight ended, Tamsin said to him "Sorry old man, I have places to be and demons to summon." before exiting through a portal while Kurtrus screamed in frustration.

With the help of Captain Hooktusk, Tamsin got a ship to Stormwind where she reunited with her fellow mercenaries. Dawngrasp ended up getting captured in Stormwind and trapped in the city's stockades, so Rokara, Bru'kan and Guff wanted to free them. Tamsin, on the other hand, wanted to destroy the entire city, which even her companions found reprehensible despite being the territory of their enemies, so they tried to stop her. Tamsin turned against Bru'kan and Rokara without mercy, but Guff was horrified that Tamsin would turn on them. Tamsin showed reluctance towards fighting Guff, but still attacked him anyway (yet apologized when she defeated him).

Tamsin later snuck into Stormwind through the markets and was confronted by the shopkeepers, but she defeated them. Afterwards, she was stopped by Xyrella, who had to unleash the power of a corrupted void shard to stop her, but Tamsin defeated her as well, paving the way to summon the dreadlord Anetheron. As she began the ritual, she was confronted by Highlord Bolvar Fordragon and the combined Alliance army. After summoning enough demons, Tamsin unleashed Anetheron whom would make her fight against Bolvar easier.

After defeating Stormwind's army, she came face to face with her father Cornelius. He asked her what she had done, and she told him that she'd taught Stormwind a lesson. Tamsin was unable to damage Cornelius normally, but instead used her shadow powers and mind-eating demons to break his sanity. Intending to turn him into her mindless puppet, she mentally tortured her father as he panicked and begged. After defeating him, Tamsin invited Cariel to the cemetery, so the sisters could engage in a final confrontation.

Once Cariel saved Kurtrus from Anetheron and they both resolved their differences, she was horrified to see that Tamsin had turned Cornelius into her abomination slave. Tamsin boasted about how she had turned used necromancy to turn Cornelius into her "masterpiece" and Cariel expressed her disgust towards Tamsin since she had come all the way to save her only to realize how utterly evil Tamsin proved to be. With no choice but to kill her father to free him of his pain, Cariel told Tamsin that she could no longer save her, but she could still save others from her. Tamsin was eventually defeated, when she uttered that she felt cold as she died for the second time, while Cariel solemnly apologised to her sister.

However, Tamsin was revived by Onyxia and Kazakus into a lich, binding her soul into her perfume bottle. Her power over fel magic greatly enhanced, and she gained the ability to create rifts which summon imps. Though she joined the war between the Alliance and Horde forces in Alterac Valley and participated with the other mercenaries, she and Bru'kan have remained enemies, as shown with a few card artworks which depict them both fighting each other despite being on the same side.

Tamsin appears as the legendary card for the Warlock class in each Year of the Gryphon expansion.

Judicious Junior, a minion depicting Tamsin when she was alive. 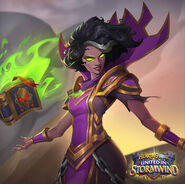 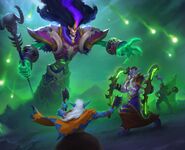 Tamsin in the artwork of "Full-Blown Evil".