Tana Nile is a alien villainess and later on & off supporting character of The Mighty Thor from Marvel Comics, created by Stan Lee and Jack Kirby. She is a rogue rigellian colonizer.

She also interacted with other space heroes and villains during the storyline Annihilation, and appeared in the Guardians of the Galaxy animated series.

Tana Nile, from the planet Rigel-3, was a leading female member of the Colonizers of Rigel. In her attempt to colonize the planet Earth, Tana Nile took a human form as Jane Foster's roommate. Tana took control of Jane Foster's will, and then resumed her Rigellian form. She attempted unsucessfully to take control of the Earth, starting with a pair of police officers who thought she was a kid in a costume and never took her threats seriously. She was later ordered to cease her attempt to colonize Earth by her superiors. She left Earth to be given a new assignment in the Black Galaxy. Some time later, she encountered Thor during his journey into the Black Galaxy and she starts to have a crush on the god of thunder.

Tana Nile later encountered the asgardian warriors Sif, Hildegarde, and sailor Silas Grant on the Blackworld planet while she fought Ego-Prime. She revealed that Ego-Prime was a slab that she had removed from Ego the Living Planet and had taken to Blackworld in order to transform it into a habitable world, but that Ego-Prime had proved to be uncontrollable. Blackworld was destroyed in a nuclear war, and Tana and her allies fled to Earth, pursued by Ego-Prime. There, she was aided by Silas Grant in clashes with Ego-Prime's monsters. Tana assumed a human form in order to live on Earth. Tana then became an ally to Thor and the Asgardians. She aided Thor in battling trolls. She first visited Asgard. She was captured by Sssthgar, but was freed by Thor, and she released Odin, Hogun, and Fandral from captivity. She accompanied Thor to the Dark Nebula to help rescue Sif and Karnilla. She accompanied Thor back to Rigel-3, just in time to witness the destruction of Rigel-3 by the Rhunians. She was then reunited with the Grand Commissioner of Rigel. She accompanied Thor to the planet Rhun. She then bade farewell to Thor with a kiss on the cheek, while Silas Grant announces that he will stay with his "good friend" Tana.

Tana visited Charles Xavier's Massachusetts Academy to learn more about human beings. During an adventure in an alternate dimension created by Franklin Richards, she fell in love with Howard the Duck. After a spontaneous kiss, Howard tells her of his attachment to Beverly Switzler, and she accepts that romance with him is inappropriate.

Later, the homeworld of the Rigellians gets attacked by the monster Mangog and his partner, a rogue Thanosi clone. The Thanosi demanded the Fire Jewel artifact, with which he can use the Map of All-Ending to locate the Designate. Tana Nile managed to survive the devastation caused by Mangog and the Thanosi, and she tells Thor that the only place the villains would be heading to next, would have to be the planet M'Hass.

During the Annihilation storyline, Tana Nile frames Ronan the Accuser for the House of Fiyero in exchange for information on Ronan. He promises to hunt her down, along with others involved in the trial, to discover the true reason behind his dismissal. Tana Nile later joined Gamora's Graces, a team of super-powered women from across the galaxy. The Graces, along with much of known space, comes under threat by Annihilus' Annihilation Wave. Tana does not survive but she manages to tell Ronan that the Fiyero are responsible for his exile. 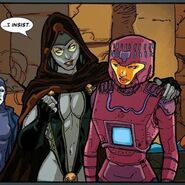 Tana in the GOTG cartoon.
Add a photo to this gallery
Retrieved from "https://villains.fandom.com/wiki/Tana_Nile?oldid=2832493"
Community content is available under CC-BY-SA unless otherwise noted.