Kill and eat the humans.

Sadistic Predator
Tank is the secondary antagonist in the 2002 comedy/horror film Eight Legged Freaks. He is a Chilean red tarantula who serves as Consuela's second-in-command and main henchman.

His vocal sound effects were provided by Kevin Michael Richardson.

Like his fellow spiders in Joshua's spider farm, Tank is exposed to noxious chemicals from mutated crickets that Joshua feeds to them and causes him to grow even bigger than a man as well as enhance his intelligence.

It is possible that Tank was the very same tarantula that was seen at the beginning of the film where he successfully breaks free from his cage and bites Joshua (along with attacking his parrot as well), causing him to knock down the other spider cages and freeing them. After the chaos that it caused, Tank escaped to the nearby mine. When he was fully grown along with his fellow mutated spiders, he is shown to be the biggest spider in the film aside Consuela and became her second-in-command.

During the spider invasion, Tank is one of the spiders that attacks the town. Attracted by Sam, Chris, and Harley's conversation inside, he moves to knocks down Harlan's trailer. However, due to Pete's interference, he ended up flipping himself onto his back by accident as he managed to flip Harley's truck, though Tank quickly gets to his feet. He jumps on the car and enraged, but is unable to catch it and the humans escape while his minions pursue them.

Soon after, Tank appeared with all the other spiders and prompts them to move away to do the job as they unable to break through the mall's fortified door. Harlan remembers Tank as the same one who busted up his trailer, and assumes Tank is the leader due to him prompting his henchman to move away (this is not right though; it is Consuela who is the leader while Tank himself is following her orders during the invasion). Tank then breaks through the steel gate and eventually, is able to create a huge hole that he can only fit for half of his body. Seeing an armed group of humans on the other side; Tank retreats, and orders his horde to attack. Swiftly, the spiders gain the upper hand.

As the humans retreat further into the mines; the tarantula's legs are later seen pushing a tracter that the humans were using to block the spiders away, and then the smaller spiders chase after the humans back to their lair, as the path that the humans had blocked turned out to be another passageway back to their lair. Although Tank knows that humans have trespassed their lair, Tank remains behind while he had the rest of his army to search the mall. At the end of the movie, Tank is killed along with Consuela and the other spiders in the explosion in the mall caused by Chris.

Tank is an enormous tarantula with brown hair covering its body, excluding certain parts that have fur of a more blackish tint. 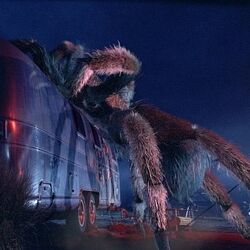 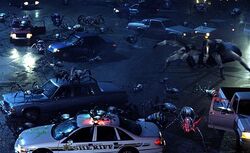 Retrieved from "https://villains.fandom.com/wiki/Tank_(Eight_Legged_Freaks)?oldid=4005126"
Community content is available under CC-BY-SA unless otherwise noted.