Tankmon are minor villains in Digimon Adventures 01 and Digimon Fusion. They serve one of the Dark Masters, Machinedramon, and they serve as tank soldiers in the Bagra Army.

Tankmon are Champion level Digimon that look like a combination between a dinosaur, a dragon and a tank. Their skin color looks like army colors and their hands are machine guns.

When Tai, Agumon, Izzy and Tentomon were looking for medicine for Kari, they encountered one of the Tankmon patrolling the hospital while being chased by one of the Mekanorimon on the main level. The two DigiDestined and their Digimon jumped out off a window as the two Digimon's attacks collided, destroying them. When Izzy found Machinedramon was using his computer to his advantage, Izzy used his laptop to confuse all of Machinedramon's army. MetalGreymon manage to crush some. The final fate of the Tankmon is unknown.

Several Tankmon serve as soldiers as the tank force in the Bagra Army.

The Tankmon also appeared along with one of the generals, Lilithmon while the Xros Heart was battling DarkKnightmon and his henchmen, SkullSatamon and SkullGreymon, and his army of Guardromon. Some Tankmon were frozen to death by Taiki's MetalGarurumon Digi-Memory, and some were killed by MetalGreymon when he used Cyberdramon as a cannon and by Shoutmon X4.

More Tankmon appeared along with several Mammothmon and the general Blastmon in the Disc Zone to fight Christopher and his Blue Flare Army. 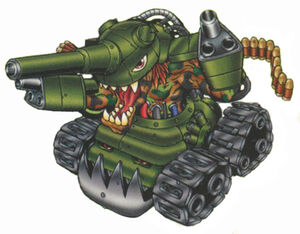 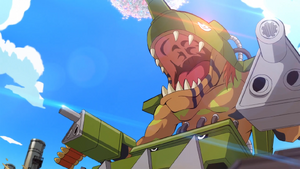 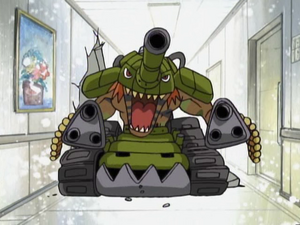 Tankmon got ahead of his enemies.
Add a photo to this gallery

Retrieved from "https://villains.fandom.com/wiki/Tankmon?oldid=3329153"
Community content is available under CC-BY-SA unless otherwise noted.