Villains Wiki
Register
Don't have an account?
Sign In
Advertisement
in: Hostile Species, On & Off, Youkai,
and 15 more

Tricking humans and causing them nuisances (but rarely going over harmful outcome).

Tanuki (in Japanese: 狸 or たぬき) are a type of wild racoon-dog native to Japan, and while a very real animal, they are also the subject of many legends in that region due to the strong animist teachings of Japanese mythology, which saw animals and nature as every bit capable of human-level thinking as we are, especially if animals gained a certain age. At that point, they were believed to be granted supernatural powers and a transformation into a youkai (or lesser deity).

Tanuki, alongside the Kitsune, are the most beloved of Japan's innumerable animal-spirits, and are known for their mischievous nature. However, like all spirits, the Tanuki could also harbor a darker nature, and some Tanuki engaged in horrific crimes and treachery far beyond simple pranks, and even Tanuki who usually contented themselves with mischief could pose a danger to humans if their pranks went too far or they were angered.

For example, many giants in Japanese legend are attributed to being Tanuki in disguise, and these giants often hunted humans and animals with cruel intent, either chasing them to the point of terror, beating them senseless, or even outright killing and devouring them, often for no real reason other than spite.

Tanuki magic is legendary, and alongside Kitsune, they are considered the most powerful of all of the yokai, and some are so powerful that small shrines have been made to appease them. Depending on the nature of such Tanuki, this can be a blessing or a curse, as a benevolent Tanuki can offer marvelous gifts, wisdom and companionship to their village, while a malicious Tanuki may grow so dangerous that a village must resort to divine intervention or a daring hero to banish the creature.

Even then, these are always partially successful, and some particularly powerful Tanuki have managed to resist even these great attempts to defeat them. However, on the whole, Tanuki are nowhere near the power level of a full-fledged deity, and if they desired it, a deity could easily dispose of even the most terrifying and dangerous Tanuki. It was simply rare for such a drastic event to occur, and on the whole, the deities tended not to interfere with the yokai unless things got very out of hand. 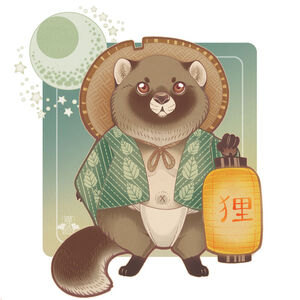 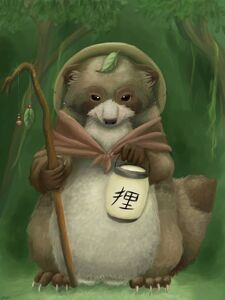 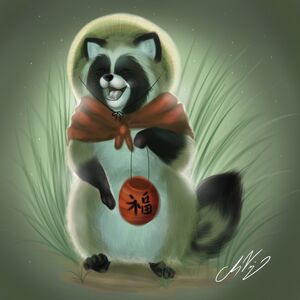