Ambassador to the realm of Edenia (formerly)

Furthering her own power and agendas.

Gain profit for herself and survive at all costs (currently succeeded).

Help Mileena reclaim the throne of Outworld (failed).
Gain and claim the godlike power of Blaze to have the ability to control dragons and subjugate the universe to her rule (failed).

Tanya is a traitor to the realm of Edenia and a villainess from the Mortal Kombat series of fighting games.

Tanya first appears during the events of Mortal Kombat 4. As the daughter of Edenia's ambassador to new realms, she invites a group of "refugees" fleeing their own world into the peaceful realm of Edenia. However, the refugees are actually a disguised Shinnok, along with Quan Chi and their sinister Netherrealm forces. Though Tanya pretends this was a tragic accident, she has in fact been working with Shinnok all along.

Thanks to Tanya's treachery, Shinnok is free to wage war against the gods who banished him to the Netherrealm. During this time, she attempts to lure Liu Kang into a deadly trap, but fails. Shinnok's power base is soon destroyed, and with her master gone, Tanya—now revealed to be 'the Traitor of Edenia' -- flees to Outworld. She helps Shao Kahn's armies briefly imprison Queen Sindel, but is defeated by Earthrealm martial artist Shujinko.

Years later, Tanya resurfaces as an "ambassador" for the Deadly Alliance—an enforcer imposing their will on the people of Outworld. But when the Deadly Alliance crumbles, Tanya finds herself alone once more. She is captured by Baraka, who gives her a choice: serve the newly resurrected Onaga or die. She joins the army of the Dragon King, becoming an advisor to Onaga as he searches for ancient incantations to fuse the Kamidogu into one. Believing that such information still exists in Edenia, Tanya brings Onaga to her native realm.

In Mortal Kombat: Armageddon, Tanya is present at the final battle within the craters of the Edenian Southlands. She fights for the Forces of Darkness and she is seen fighting her fellow Edenian rival Jade. She dies alongside the rest of the kombatants.

Tanya is an Edenian whose father was an Ambassador of Edenia and whose family respected Kitana and King Jerrod's family in the days before the Outworld conquest of Edenia 10.000 years ago. She helped the deposed Mileena escape from imprisonment at the hands of the usurper, Kotal Kahn.

During the rebel attack in Z'Unkahrah, when Kotal Kahn tries to kill a traitorous Kano, Tanya leaps into the fray to stop him. Kotal warns Tanya that he will never forget those who helped Mileena escape imprisonment, but Tanya protests that Mileena is willing to free Edenia from Outworld, whereas Kotal refuses to do so. Kotal argues that Outworld is strongest when united, but Tanya replies that it will never be united under his rule. The emperor defeats Tanya, but before he can kill her, he is attacked by Tarkatan soldiers, Tanya escaping while he is distracted.

When D'Vorah and Cassie Cage team up to retrieve Shinnok's Amulet from Mileena's camp in the Kuatan Jungle, Rain explains that he has set up Mileena to kill herself by using the amulet, whereupon he will assume power. While he is speaking, Tanya sneaks up on Cassie from behind and attacks her while D'Vorah does battle with Rain. Tanya is victorious against Cassie and, after D'Vorah defeats Rain, turns to attack her, too. She says D'Vorah's people, the Kytinn, believed they were left alone out of respect for their solitary nature; in fact, they were simply disliked.

D'Vorah then defeats Tanya, and is about to kill both Tanya and Rain with her ovipositors when Cassie asks her to spare their life. D'Vorah reluctantly obeys, allowing the two Edenians to live.

Tanya seems to view her self as a survivor more than anything else, justifying her choices as being the "righteous decisions". Though she is skilled kombatant, Tanya prefers more subtle means of achieving her goals.

Tanya will manipulate, scheme, and kill anyone to get what she wants or survive any dangerous situation.

Like many of the other fighters in Mortal Kombat: Armageddon, Tanya wants to use the power of Blaze. In her non-canon Armageddon ending, she uses the power to control dragons. That was her goal in the game to call upon the most powerful creatures to have at her side and use them to rule the realms.

Tanya is a skilled fighter and has a number of special attacks. She is able to shoot a fireball from her hands and lunge forward in a corkscrew style attack with her feet covered in flame aimed at the opponent. Tanya can also perform kicks that have her feet charged with fire and she can also disappear in flaming haze, turning invisible. 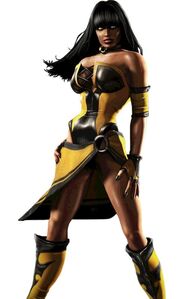 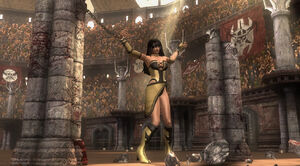 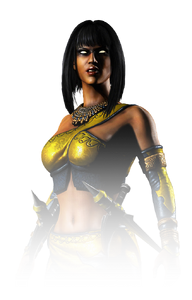 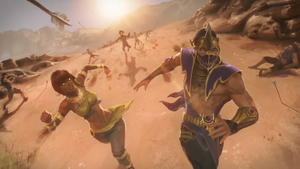 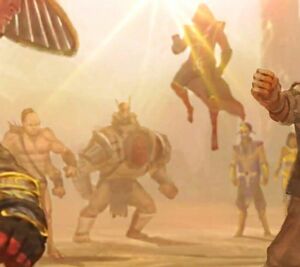 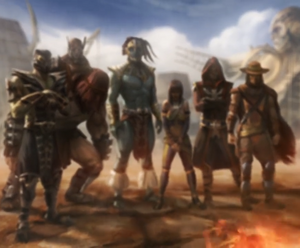 Tanya sides with Kotal Kahn and his followers. 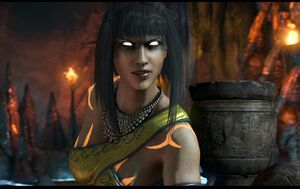 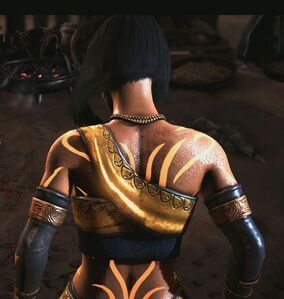 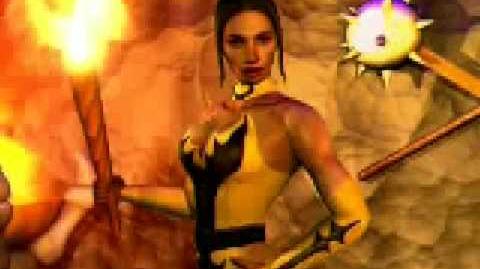 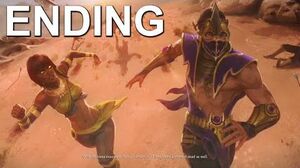 Retrieved from "https://villains.fandom.com/wiki/Tanya?oldid=3569899"
Community content is available under CC-BY-SA unless otherwise noted.