Tanya Danville is the main antagonist from "Zoo York", episode 2.03 of CSI: NY.

She was portrayed by Lesli Kay.

Tanya Danville is an employee at a cosmetics company, as well as the mother of Madison Danville, who was good friends with Briana Freemont. Her brief backstory revealed that she and Jessica Freemont (Briana's adoptive mother) were debutantes together 20 years ago. Tanya attended the debutante ball with Simon Freemont, only for Simon to end up with Jessica. Simon and Jessica ended up as husband and wife, while Tanya was left brokenhearted and vengeful. In the 20 years that passed, Tanya still held a grudge against Jessica, and when their daughters were participants in the debutante ball, Tanya took the opportunity to exact revenge on Jessica.

The target of Tanya's twisted revenge was Briana, and it began with creating a batch of synthetic spider venom in her plan to kill her. The villainess followed Briana to the park where she met her ex-boyfriend, Sam Wilson, and after Sam left, the evil Tanya injected Briana through her neck with the venom, killing her. Briana's body was found by Sheldon Hawkes and Stella Bonasera, and after identifying Briana to Jessica, Tanya appeared and acted sorrowful towards Jessica, hiding her villainous persona.

While Tanya was committing the murder, though, a button from the dress she wore came off and was at the scene, and that button led to Hawkes and Stella revealing Tanya as Briana's killer. The pair confronted Tanya at the ball, and after denying it at first, Tanya admitted to killing Briana, stating that the did so to get back at Jessica. She claimed that Jessica stole Simon from her 20 years ago, so she decided to kill Briana to take something from the woman she considered her rival. Stella later handcuffed and arrested Tanya for Briana's murder. 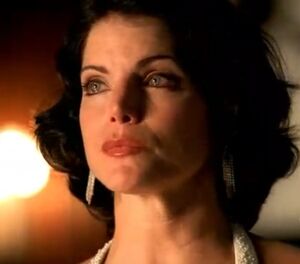