Assassin and an associate of the Red Ribbon Army

To take revenge on the turtle hermit school by killing Goku and Tenshinhan.

Tao Pai Pai (also known in the English dub as Mercenary Tao) is an assassin and a major antagonist from the Red Ribbon Army Saga, the secondary antagonist in Piccolo Jr Saga of the manga and anime series Dragon Ball, and later appears as a minor antagonist in Dragon Ball Z.

He was voiced by Kent Williams.

A famed assassin and mercenary, Tao Pai Pai was hired by the Red Ribbon Army to assassinate Son Goku. Commander Red was unsure about his ability and Tao demonstrated by killing General Blue, a former high ranking officer with a tongue strike.

He defeated Goku with his Dodonpa, thinking he was dead, and killed his friend Bora with the back of his own spear, but he forgot one of the Dragon Balls. While Tao Pai Pai stayed on a nearby city to fetch new clothes, Goku, who had survived, climbed the Karin Tower, where he was trained by Karin. After three days, Tao attacks Upa, asking him where he was hiding the Dragon Ball, but Goku interrupts him and fights him again. Goku continuously beats Tao up pummeling to the ground as his tunic is torn off. He uses his Dodonpa again, but Goku blocks the ray with his hands, at which point Goku reveals he climbed the Karin Tower and drank from the Sacred Water, which made him stronger. Tao flees and decided to climb the tower by himself, but he is tricked by Karin into drinking common water. Believing to be stronger than before, Tao decides to return, and is given a fake Kinto'un flying cloud by Karin, which makes him fall to the ground.

He once again fights Goku and again is defeated, begging for mercy. While Goku is distracted, he throws a grenade at him and attempts to flee, but Goku kicks it back at him, blowing him up and nearly killing him.

Later, it was revealed his brother was Tsurusen'in. In the Ma Junior Saga, he participated in the Tenkaichi Budokai, rebuilt as a cyborg and sought to gain vengeance on Tenshinhan for deserting his brother. He defeated and injured Chaozu in the preliminaries and faced Tenshinhan in the quarterfinals. Tao used a katana and scarred him on the chest. He then fired a Super Dodonpa, but the former Crane student nullified the blast with a kiai and defeated him with one punch. Tenshinhan then drops an unconscious Tao over to Tsurusen'in who then takes him away.

In his first appearance, he acted as the enforcer for a city mayor named Bourbon, who ran a shelter that could supposedly protect people from Cell. However, Son Gohan showed up and disrupted Bourbon's plans. When Lao Chu, an old martial artist from the town, took on a few henchmen, Tao was called out to fight him. After exchanging a few blows, Tao had him at his mercy and was about to finish him off with his Super Dodonpa, when Gohan stepped in. Though at first relieved that the boy was not Son Goku, whom he still feared from their last confrontation, he soon fled after finding out he was Goku's son.

In his second appearance, Tao Pai Pai was working for a gangster named Vodka, who wanted the Dragon Balls to wish to become ruler of Earth after Cell left. However, Goku showed up, also looking for the Dragon Balls. Though he wanted the two Dragon Balls that Tao had, he was disappointed not to have anything to give in return, so the cyborg made him a deal. If Goku could solve three complex puzzle rings by dawn the next day, he could have the balls. Tao then took Goku's jacket, with the Dragon Balls inside and he and Vodka made a break for it, thinking that Goku would not be able to track them down. However, Goku managed to solve the puzzle rings and found them with his Shukan Ido.

In Dragon Ball Z: Idainaru Son Goku Densetsu, an alternate ending has Tao Pai Pai being much stronger then Goku. Tao easy overpowered the young boy with hits to back of his neck, to his face, and his stomach. With Goku too beat up to move, Tao killed him with another Dodonpa.

Tao Pai Pai is an extremely skilled fighter and a master assassin, to the point where he can even kill someone with only his tongue, doing so by using his tongue to pierce their temple, striking a pressure point and killing them, a technique he used to kill General Blue. Tao can also manipulate energy in the form of the Dodonpa, the signature technique of his brother Tsurusen'in's Crane School. It is unknown if he invented this technique or the Crane Elder did, though his version of the attack in the video game, Dragon Ball Z: Budokai Tenkaichi 3 is called the original Dodonpa, hinting that he may have invented it. After becoming a cyborg, Tao's abilities were enhanced and he gained hidden weapons within his arms that he accessed by removing his hands. These weapons came in the form of a blade and a cannon that could fire the Super Dodonpa, a more powerful blast version of the Dodonpa. He could also use these openings as compartments to store items. 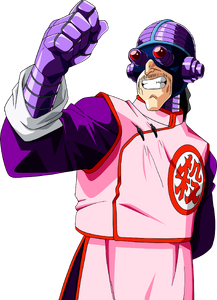 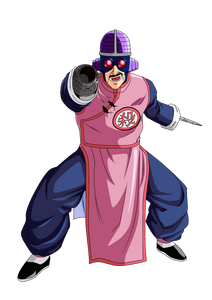 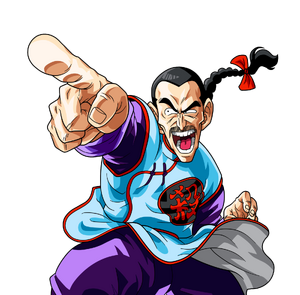 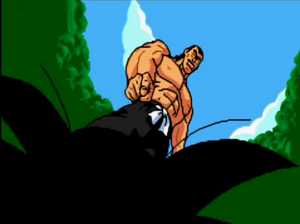 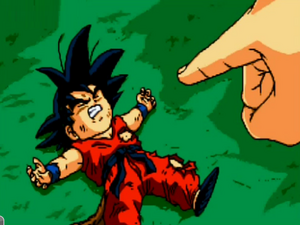 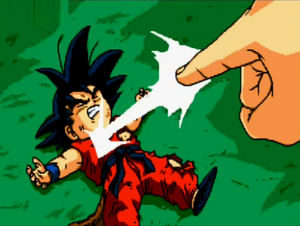 Tao nearly killing Kid Goku with Dodonpa.
Add a photo to this gallery

Retrieved from "https://villains.fandom.com/wiki/Tao_Pai_Pai?oldid=2807807"
Community content is available under CC-BY-SA unless otherwise noted.