Villains Wiki
Register
Don't have an account?
Sign In
Advertisement
in: Articles under construction, Cleanup, Aliens,
and 25 more

Consume everything in their path.

Provide food to the Queen in order to produce more Tao Tei.

The Tao Tei are the secondary antagonists of the 2017 live-action monster film The Great Wall. They are an ancient reptilian alien race from an unknown planet that invaded China. They are also led by the Queen, the alpha-female and leader of their kind.

Their vocal sound effects were provided by Jonathan Borland.

The Tao Tei are dark green reptilian quadrupedal, carnivorous reptiles, similar in appearance to ceratopsian dinosaurs (particularly the Defenders and Queen). They possess retractable membranous head frills which resonate, allowing them to communicate with each other over long distances. These beasts possess elaborate motifs on the crests of their skulls, which gave the inspiration of the taotie motif to the cultures of Ancient China. There appear to be three main breeds of Tao Tei: Soldiers, Defenders, and the Queen.

The Tao Tei are ravenous, aggressive, bloodthirsty and carnivorous monsters whose sole purpose is to consume anything in their path. They are eusocial creatures like ants, dedicated to serving their queen. They are carnivores, and will devour the flesh of their own to replenish their numbers. Strangely, magnetic rocks (such as lodestones) pacify them by muffling the signals from the queen. Soldiers and defenders are helpless without the constant contact with the queen.

During 1,000 BC in Ancient China, a destructive meteor crash-landed into Gouwu Mountain, turning it green. With it came forth the Tao Tei that proceeded to lay waste to China. The appearance of the creatures coincided with the magisterial rule of an oppressive and despotic emperor, making the Chinese believe that the Tao Tei were sent from the gods to punish the emperor of the time for his abuse of authority. Since then, they attacked Northern China once every 60 years, and the Nameless Order was formed to combat the Tao Tei with the Great Wall erected to safeguard the land.

During the Song Dynasty, a Tao Tei soldier ambushed a group of European mercenaries and killed all of them except for Pedro Tovar and William Garin, who killed and sliced the creature's arm. Following the duo's imprisonment by the Nameless Order, the Tao Tei attempted an invasion into the interior of China, causing casualties of both the Order and themselves before the Queen withdrew the attack. It was discovered that the Tao Tei could potentially be pacified using magnetic rocks, and after Garin managed to capture a living Tao Tei during the next attack to test if it works, a plan was devised to use them to destroy the Tao Tei through the Queen. However, the Queen managed to devise a method in digging under the Great Wall (revealing the previous attack to be a diversion), circumventing it and the Order before she led her hordes to the capital with the help of the captured Tao Tei soldier taken there.

The capital was nearly overrun, but a small contingent of the Order managed to hold them off with the help of the royal guards. The Queen was tricked into consuming meat tainted with magnets and was killed when William Garin shot an explosive arrow. The death of the queen severed the hive mind, resulting in the remaining Tao Tei to permanently freeze solid in place.

These Tao Tei are skinny with longer limbs and snouts. Their eyes are located on their shoulders instead of the head, and are the main weak points.

Bulkier and more armored, their role is to protect the Queen, and are able to unfold their heavier frills to act as massive shields against bombardment. These armored frills are capable of withstanding catapults, explosions and sharp projectiles. 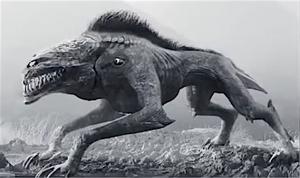 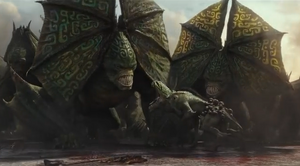 The Tao Tei starting a rampage within the border of the Great Wall ...

... before the Queen and her guards arrive. 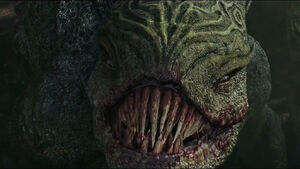 The Tao Tei Queen's evil grin as she stares up at William and Lin, who are attempting to destroy the Tao Tei horde.

The Tao Tei providing more food to their Queen.

The Queen's death along with all of her offspring. 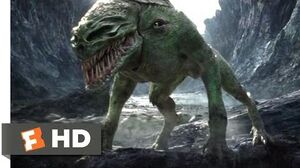 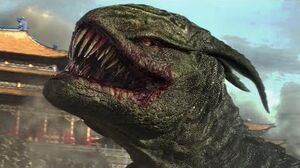