The Tar Monster is a recurring villain in the Scooby-Doo franchise. It is a persona adopted by Mr. Stoner to rob treasures from the buried city.

He was voiced by Michael Bell and Frank Welker.

The Tar Monster made his first appearance in the The Scooby-Doo Show episode of the same name. He appeared as the ancient guardian of the lost city of Byzantius in Turkey, especially the treasure of it's hidden inner sanctum. He was revealed to be Dr Stoner, an archeologist who found the treasure and was smuggling it out to keep it for himself.

A different version of Tar Monster appeared in Scooby Doo Mystery SNES. He was really Dean Drabwell. It seems that Old Man Grumper's land was worth a fortune, but he wouldn't sell it to Drabwell. So he devised a plan to scare Grumper into selling it to him. His wife was his accomplice in all this, as she dressed up as a zombie to aid in the executing of the plan. With this great master plan, he was going to get the old man to sign his land over to him.

The Tar Monster appeared again in Scooby-Doo and the Cyber Chase, where he appeared on the final level, this time it was not a costumed villain, instead, it was a cyber-monster. It chased Shaggy and Cyber-Shaggy, but was defeated when Scooby reached the box of Scooby Snacks, completing the game.

The Tar Monster appears in several levels of the game, he can throw "tar balls" at Scooby but he cannot talk. He was brought back by the Mastermind.

In Scooby-Doo 2: Monsters Unleashed, The Tar Monster serves as the final antagonist. He was the last costume to come to life as a real monster, he was one of the four monsters that Scooby and Shaggy created when messing around with the machine. The main difference about the tar monster was that he could spread himself and therefore appear much larger. He was next seen in the movie when Coolsville was invaded, the Tar monster Trapped an entire street full of people in tar.

He was one of the main villains in the final few scenes. The gang needed to connect the control panel to destroy all of the monsters that had been created. To stop them, the evil masked figure sent the Tar Monster to smother them, trapping everyone in his tar with the exception of Scooby, who needed to get to the other side of the room. To do so, Scooby used a fire extinguisher to make the tar of the monster go hard, Shaggy still had the control panel, when Scooby froze part of the monster, Shaggy was able to break his arms free. Scooby used the fire extinguisher to half skate and half surf on the Tar Monster to get to the other side; it was finally destroyed when Scooby connected the control panel to the base, the Tar Monster was the last to die as he was almost invincible in comparison to the other monsters. He drowns in his own body and dies after Scooby turned on the machine where to put the control panel. His Huge Tar body dries out and he turns back into a costume with the Pterodactyl Ghost, the Miner 49er, the Skeleton Men, and the Zombie.

In this version, the Tar Monster is somewhat deadlier than its previous incarnation, able to snare almost all of Mystery Inc. at the same time and mold itself into liquid form to choke or capture someone, something that previous incarnations were unable to do.

He also appears in the video game based on Monsters Unleashed. 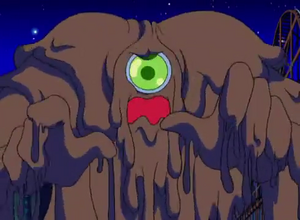 Tar Monster as he appeared in Scooby-Doo and the Cyber Chase. 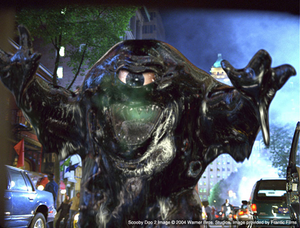 The Tar Monster as he appeared in Scooby-Doo 2: Monsters Unleashed.

The Tar Monster on the Scooby-Doo 2: Monsters Unleashed DVD. 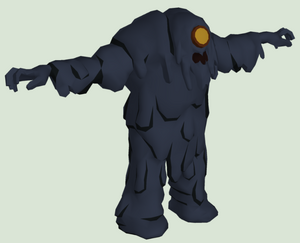