Deformation and transformation in Tar
Manipulation of tar surfaces

Hunt down and kill the ones responsible for his condition.

Joseph Monteleone, nicknamed Tar Pit by Cisco, is an antagonist in the second season of The Flash. He is a meta-human, having gained the power to morph his body into boiling tar.

He was portrayed by Marco Grazzini, who also voiced Alejandro Burromuerto in Total Drama Action and Total Drama World Tour.

As a teenager, Joseph Monteleone committed a crime that placed him in a juvenile detention center. At the center, Joseph bunked with Daniel Burge. Just prior to the S.T.A.R. Labs particle accelerator going off, Joseph was brought to a facility by Clay Stanley and Daniel Burge who threaten to throw him into the boiling tar pit underneath should he not give them the number of his bank account. Although he gave them the number, Clay dropped him into the vat. As the particle accelerator went off, Joseph was buried beneath the ground for two years, unable to see or feel. The incident turned him in a meta-human.

Revenge on Clay and Burge

During excavations on the site, Monteleone, now consisting of tar, is able to free himself. Bent on revenge, he visits Burge, exactly explaining the pain Burge and Clay caused to him. He then sarcastically offers to show this pain to Burge and kills him by transforming his hand into boiling tar and covering Burge in it. When the body is found, Detective Joe West remarks how the body looks like he fell into a volcano.

Through Cisco, Barry is warned that a meta-human attack is in progress at Downtown Central City. It is Monteleone, now known as Tar Pit, who has cornered Clay Stanley. Tar Pit is about to kill Clay but Barry saves him. He then goads Tar Pit into attacking him with a ball of burning tar. Tar Pit throws one but Barry quickly dodges it. The burning projectile hits a water hydrant that explodes from the impact. The water down on Tar Pit, who melts into a clay-like pile of tar. Barry brings Clay to the CCPD and Tar Pit uses this opportunity to escape.

Tar Pit next intends to get revenge on Clark Bronwen, who was present but not directly responsible. Clark, who is organizing illegal street races, is attacked during one when Tar Pit heaves a car off the ground and throws it onto him. Barry arrives in time to save Clark but one of the glass shards caused by the accident hits Iris West in the shoulder. Barry brings Iris to the hospital and thereby gives up the opportunity to stop Tar Pit.

To lure in Tar Pit Joe and Barry use Clay as bait. This proves to be effective when Tar Pit indeed appears as an enormous clay-like tar mass. Barry then attacks Tar Pit by throwing a device into him that hardens his body and smashes it. This reveals Monteleone in his human form who is knocked out by Joe and presumably arrested in the Pipeline. 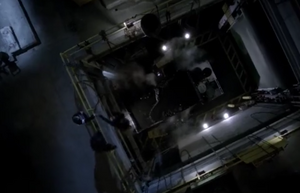 Monteleone is dropped into the tar pit. 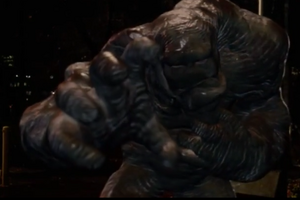