Lord of all Oni

Tarakudo is the main antagonist of the fourth season of Jackie Chan Adventures. He is a malevolent oni, an ogre-like demon of Japanese mythology, who seeks to rule over the world with his nine generals.

He was voiced by the late Miguel Ferrer, who also played Shan Yu in Disney's Mulan, Big Boss in 20th Century Fox/Blue Sky's Rio 2, and Deathstroke in Teen Titans: The Judas Contract.

Like most villains associated in the Jackie Chan universe, Tarakudo is characterized as a villain devoid of morals and sentiment. However, he does have a sense of humor, as he is shown making clever puns and witty banter in the midst of battle. When Paco mistook him for the Great Pumpkin, Tarakudo was slightly confused about the statement before deciding to humorously go along with the idea. For that reason, he is easily one of the most light-hearted villains.

Unlike the other villains, Tarakudo is shown to have apparent benevolence towards his minions, while other villains have strained relationships with theirs. This is best exemplified with forgiving the Dark Hand thugs for their failures much more often than other villains, who would punish them in severe and dramatic fashions. In turn, his underlings are loyal and respectful towards him, calling him "Boss man" or "Master Tarakudo" — both of which he takes a liking to. He holds all of his generals in high regard, and compliments them when any of them performs their duties well.

He also displayed genuine concern for General Ikazuki when he ended up stuck on Finn's backside. When General Ikazuki playfully imitated his shivering, he was not at all offended, or at least simply choose to ignore it. This implies that he and his generals occasionally joke with each other.

Tarakudo is even polite to his enemies and allies alike, such as calling Jackie Chan "Mr. Chan" (while most villains simply call him "Chan"). He also calls the Dark Hand by their first names instead of nicknames (like Daolong Wong — who referred to them as "Gan, Run and Chui") or "Enforcers".

Another factor that separates him from other villains is his lack of interest in revenge, as he is more preoccupied with gathering the masks that hold the spirits of his long-lost loyal generals; had the Chan Clan not constantly interfered with his plans, he would have simply left them alone or saved them for later out of sheer disinterest towards them. However, the Clan's constant hand in the Oni's failure at resurrecting and the Dark Hand's constant defeats wear Tarakudo's patience rather thin.

Though still in a less severe manner than other villains, Tarakudo punishes the Dark Hand (such as locking them in faux coffins or having Chow's shadow eaten, for example). However, sometimes he finds that he must forcefully remove Hak Foo from battle, as Hak Foo constantly forgets that an Oni mask cannot be removed without good magic (along with his constant failure at getting one).

Tarakudo does admit to being a sore loser and attacked the victorious party in one location; however, it seemed to have been non-lethal, as the one who was hit seemed perfectly fine afterwards.

However these redeeming traits do not change the fact that Tarakudo is still an evil entity who wishes to bathe the world in eternal darkness and shadow. Though in Post-Mortem, this does not deter Tarakudo's ambitions and his cunning plots to become the king of the world.

Tarakudo is quite aware of his shortcomings, mortality and limitations. While the Demon Sorcerers looked down on humans, Tarakudo sees value in them — at least in the moments until his vast empire of Shadowkhan and Oni rise again. He generally doesn't seem to have a big opinion on humans whether they be good or bad, but still sees them as something that he can use.

Uniquely, while he doesn't seem to have a bias on humans, he believes that Jade Chan will return to the Dark Side one day as the Queen of the Shadow Khan, which is a mantle that she once occupied. When Jackie took Jade away from Tarakudo, he remarked that she would in time because of her youth. As such, Tarakudo has expectations of Jade to one day become an evil entity and a force to be reckoned with; he once even joked around that her Oni Halloween costume was a "reversal" to having rejoined the forces of Darkness. Though Jade has caught his attention, he has no qualms about putting her in mortal danger, assuming that she will either survive or exhaust her usefulness as a one-day leverage or ally.

Tarakudo has a habit of roaring when in battle, and striking fear into his enemies by proclaiming who he is and that he is a force to be reckoned with. Whenever his plans to implant a mask onto one of his thugs (usually Hak Foo because of his power) goes awry, he takes advantage of the situation to do what he can and places whoever wears the mask under his sway towards the dark forces.

When revived he kept much of his post-mortem personality, but became a little more brutish and blood-thirsty and subtly show-offish showing off his newly restored demon body, using the term and then attacking the J-team with all of his power and might to prove that they were no match for him.

Tarakudo is an ancient demon, who once engulfed the world in complete darkness along with his nine generals, each controlled a different tribe of Shadowkhan. His reign of terror ended when his generals were trapped within the Oni Masks, which were then scattered throughout the world. Tarakudo had a mask for himself, but he stole it before being imprisoned and hid it in the Shadow Domain, where he went to a deep slumber. Centuries later, Shendu finds one of the masks, and places a sorcery on it to be capable of summoning Shadowkhan without having to wear the mask. Later on, Daolon Wong would do the same thing.

After Daolon Wong loses his powers and is arrested, along with the Enforcers and Hak Foo, he attempts to summon Shadowkhan with improvised ingredients, but ends awakening Tarakudo instead, who then takes the Enforcers and Hak Foo out of jail to help him locate the masks. They first go after the ruined temple of Shendu, but they are followed by Jackie, Jade, Uncle, and Tohru, who recognizes Tarakudo as an Oni, a Japanese demon whom he heard stories during his childhood. Tarakudo retrieves the mask and Chow ends up wearing it. Tohru reads a tablet while Jackie fights the Shadowkhan summoned by Chow and Tarakudo teleports Hak Foo and the other Enforcers somewhere else. By using a special enchantment, Jackie removes the mask from Chow, who is then teleported by Tarakudo. Unlike other villains, Tarakudo wasn't very concerned about this defeat, which the Enforcers noticed right away. Tohru tells about the history of Tarakudo and the masks, so they start a new journey to find the masks before Tarakudo does. They eventually find the Hanafuda Cards, magical cards that help them locate the masks and tells the ingredients to remove each mask. They manage to secure each of the masks, but not without having to fight Tarakudo for each one.

When Jackie and Jade find the last mask, Jade notices it strange that neither Tarakudo nor his henchmen are after it. When all masks are put together in the vault of Sector 13, they all shatter, releasing the Oni Generals who escape the place and each one spread in a direction, in order to engulf the world in darkness. Jackie, Jade, Uncle and Tohru, along with El Toro and Viper, decide to fight the generals, only to end up imprisoned by Tarakudo and Ikazuki, his right-hand. Suddenly, the Hanafuda Cards react to the last mask, which was the mask of Tarakudo, that was in the Shadow Domain. They remember how Jade once used a tattoo of Tarakudo and was able to summon Shadowkan, so Uncle makes a tattoo on Tohru for him to travel to the Shadow Domain and retrieve the mask. Tohru mangages to get the mask, but then goes insane due the tattoo's corruption.

Tarakudo notices the confusion and attempts to kill them, so Uncle starts to make a potion in order for Tarakudo to be able to wear the mask. The team knock Ikazuki out and keep Tarakudo busy while Uncle finishes the potion, which turns Tarakudo into an humanoid form. Tarakudo fights them all hand-to-hand and overpowers them. As he tries to take the mask from Jackie, he notices that Jackie is not holding it before Jade jumps from his back and places the mask on his face, forcing Tarakudo, his generals and all Shadowkan to be sucked into it, forever trapped inside the mask. 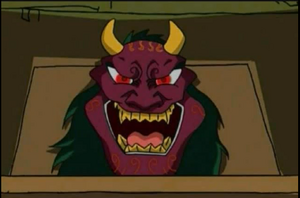 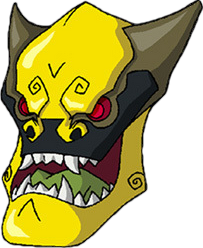 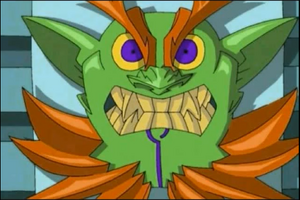 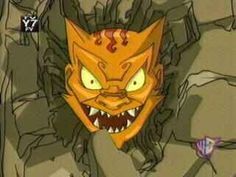 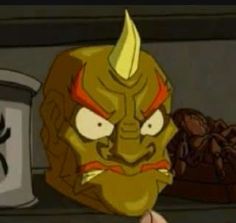 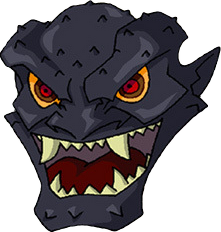 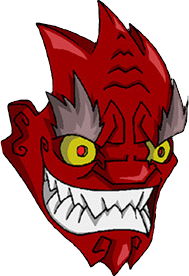 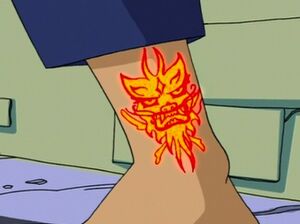 The Mark of Tarakudo on Jade's ankle

The Demon Archive of Tarakudo 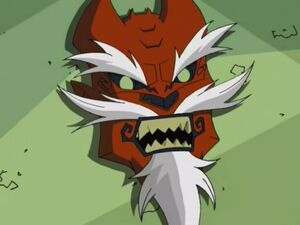 Tarakudo's mask
Add a photo to this gallery

Retrieved from "https://villains.fandom.com/wiki/Tarakudo?oldid=4161708"
Community content is available under CC-BY-SA unless otherwise noted.