Captain of the Daidalos

Destroy the Galaxy Police.
Conquer the universe (all failed).

Tarant Shank is the main antagonist of the Tenchi Muyo! GXP series. He is first introduced as a humanoid space pirate and is later turned into a cyborg. Tarant is a member of the dreaded Daluma Guild, and is feared even by his own peers and responsible for much of the terror the organization holds over the galaxy. He is the arch-nemesis of Seina Yamada.

He was voiced by Yuuki Matsuda in the Japanese version, and Kim Strauss in the English dubbed version.

Tarant is the bloodthirsty and cruel captain of the Daidalos, feared by both the Galaxy Police and his subordinates alike. He is a greedy space pirate who takes no prisoners and treats his subordinates as discardable objects that will die if it means comforting Tarant. He will eagerly kill someone if it means demoralizing his opponents, and likewise, no prisoner brought aboard his ship tends to live very long. As much as he is sadistic, he is a survivalist and cowardly egotist at heart who resorts to using others as a shield when his selfish, evil plans get thwarted. Even his own subordinates are disposable to him, and they will die if it means relieving Tarant's temper or ensuring his own survival. His arch-nemesis is Seina Yamada, swearing vengeance upon him for bringing him shame, and openly suggests killing anyone who brings him shame. 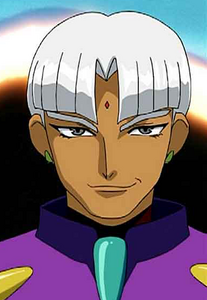 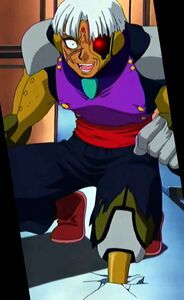 Tarant after becoming a cyborg.