This article is about all the villains in the DC Universe with the name of Tarantula.

Originally, Catalina Flores, a former FBI agent and the sister of Blüdhaven's assistant district attorney, dressed in the costume of her hero John Law, the Tarantula, in order to battle the corrupt police officers and gangland criminals of the city. It was inevitable for her to encounter Blüdhaven's protector, Nightwing, but he did not approve of the more extreme measures she took.

When investigating the murder of "Delmore Redhorn," the corrupt Chief of Police in Blüdhaven, Nightwing discovered the murderer was in fact Tarantula, and that she was working for his nemesis Blockbuster. She had also manipulated an encounter with Nightwing in such a manner that Barbara Gordon, his girlfriend at the time, broke up with him.

Working with "Tad Ryerstad" (Nite-Wing), Nightwing was able to have Tarantula arrested for the murder of Redhorn, although in the process Tad, a wanted vigilante, was also arrested. Tarantula was out on the streets soon enough however, and when the battle between Nightwing and Blockbuster heated up, Tarantula involved herself and shot Blockbuster, murdering him.

Nightwing could have prevented the murder, but driven to the edge of his sanity by Blockbuster's calculated assaults on everyone whom Nightwing held dear (Blockbuster knew his secret identity and exploited this), in a moment of absolute misery, Nightwing stood aside and let Tarantula kill him.

Allowing Tarantula to kill Blockbuster caused Nightwing to have a nervous breakdown, and Tarantula took advantage of his near catatonic state to rape him. During the following period of time she ran off with him and attempted to establish a relationship with him. After a while, Nightwing came to his senses and turned himself in for the murder of Blockbuster. He was acquitted, however, and worked to bring in Tarantula, who was sent to jail.

She has turned up in Secret Six most recently, in possession of a "Get Out of Hell Free" card, forged by Neron. The card is coveted by Junior, Rag Doll's insane sister, who sends an army of supervillains after her. She eventually sacrifices herself by pulling Junior and herself in front of thee combined attacks from the assembled villains, killing them both. 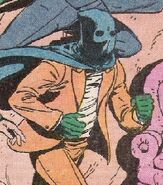