Queen Sectonia's servant (formerly, until he was punished for failure)

Taranza (in Japanese: タランザ, Taranza) is the former servant of Queen Sectonia and the secondary antagonist of the 2014 Nintendo 3DS video game Kirby: Triple Deluxe. He is a spider-like creature who hails from Floralia. At the start of the game, Taranza kidnaps King Dedede, who he mistakes for Kirby as the hero of Dreamland, during his attempt to capture Dream Land's hero, prompting Kirby to pursue after him.

He later reappears Kirby Star Allies as a supporting protagonist and playable Dream Friend as part of the Wave 3 update along with Magolor, Susie and the unlockable Three Mage-Sisters.

Prior to the events of Kirby Triple Deluxe, Queen Sectonia was once a kind ruler, and Taranza and Queen Sectonia were originally good friends. One day, Taranza found the Dimension Mirror and gave it to Sectonia. However, when Sectonia looked into the mysterious mirror, she became corrupted and obsessed with beauty, changing her into a power-hungry tyrant. Taranza stayed loyal to her, hoping she would return to her normal self.

When the People of the Sky send the Dreamstalk to bring "the hero of the lower world" to save them, Sectonia had Taranza interfere with their plans by kidnapping the hero. The morning after the Dreamstalk grew, Taranza enters King Dedede's castle, with Kirby following. He easily defeats a group of Waddle Dees, and captures King Dedede, believing him to be the hero, and flees the castle into the higher regions of Floralia, promoting Kirby to chase after them.

As Kirby travels higher into the Dreamstalk, Taranza attempts to stop his progress by either creating or aggravating powerful monsters. Despite Taranza's attempts, Kirby defeats all the monsters thrown at him and presume his chase on Taranza.

When Kirby finally confronts Taranza, Taranza comments on Kirby's persistence, but declares that he can not have Kirby interfere with Queen Sectonia's plan. He explains how the People of the Sky used the Dreamstalk to bring the "hero of the lower world", but he saw right through their plans.

He guessed that Kirby came to rescue King Dedede, and which point he took control of King Dedede, turning him into Masked Dedede, and forces the king to fight Kirby. Taranza controls King Dedede with strings as if he was a puppet. King Dedede was eventually defeated, breaking his hammer and part of his mask.

Taranza, still not done, zaps King Dedede with his magic, causing the king to grab a huge axe and confront Kirby a second time. King Dedede proved to be a powerful threat with the axe, but was ultimately defeated a second time.

A disillusioned Taranza approaches an unconscious King Dedede, asking how he could of lose as he supposedly did as his queen demands. Just then, he came into a slow realization that Kirby was the true hero.

Panicking, Taranza summons his queen, hoping she would protect him from Kirby. Upon being summoned, however, Queen Sectonia attacks Taranza with her ruby sceptre, sending him flying out of the castle, criticizing his failure as well. Sectonia confronts Kirby herself, but she is eventually defeated.

After her first defeat, the mad Floralian queen fuses herself with the Dreamstalk, proclaiming that all of Popstar will be under her command for eternity, and covers the place (and even all of one of Planet Popstar's hemispheres) with vines. With a little help with King Dedede and the People of the Sky, Kirby causes the vine to retract, giving him enough time to confront the queen a second time.

Despite her new powers, Sectonia is defeated a second time, but she captures Kirby with her vines. Just when it all seems hopeless, Taranza suddenly reappears with King Dedede. Taranza throws King Dedede at Kirby to free him from the vines, Dedede then throws Kirby at Taranza, who then throws a Miracle Fruit at Kirby, turning him into Hypernova Kirby. Using the power of the Hypernova, Kirby defeats the queen seemingly for good.

Afterwards, the vines disintegrate, and Kirby and King Dedede fall from the sky. The redeemed Taranza catches King Dedede while the People of the Sky catch Kirby. They then admire a fully-bloomed Dreamstalk, serving as a new landmark in Dream Land.

Taranza appears after three years prior to Kirby Triple Deluxe. Taranza is one of the final bosses played throughout; however, after defeating him, his dark side rises and the Dimensional Mirror returns. However, the mirror looks more menacing than it was in Kirby and the Amazing Mirror. Taranza appears in the Empyrean as an ordeal boss. It would cost the player 15 Vigor to fight against him. In contrast to his physical appearance from Triple Deluxe, Taranza changed his clothing to mainly all purple, meaning that his power has risen and ready to fight.

After King D-Mind is defeated and the Dimensional Mirror is shattered, Taranza then returns to his senses and apologizes for allowing the mirror to corrupt him. Afterwards, Taranza becomes a resident of the village hub world, sitting on top of Magolor's Shoppe. His coloring is back to normal, indicating the end of his curse.

Taranza appears as a Dream Friend added in Wave 3 (alongside Magolor and Susie) to aid Kirby and allies on their quest. He can trap enemies in webbing and kick it, similar to the Spider ability. He can also summon the Dreamstalk out of the ground and a replica of Queen Sectonia to zap enemies with lightning.

Taranza appears in this game as an ordeal boss. His role in this game is much smaller than it was in Team Kirby Clash Deluxe. Once again, Taranza is possessed; not by Dark Taranza or the black mirror this time, but rather by Parallel Nightmare to serve as his minion in conquering the Dream Kingdom.

On their way to Nightmare's lair in the Empyrean, Taranza appears to engage Team Kirby. His battle is identical to the one in Team Kirby Clash Deluxe, although he gains a new attack where creates large diamonds to toss at the team. Upon defeat, the curse is lifted, and Taranza thanks Team Kirby for returning him to his senses before departing, making his residence in the village hub world, again residing on top of Magolor's Shoppe. 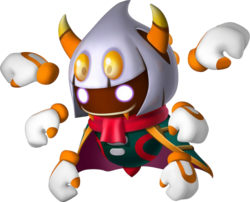 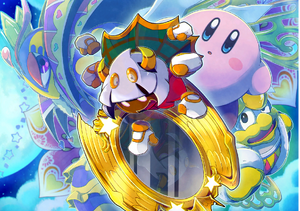 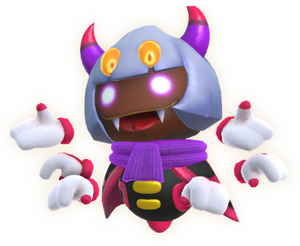 Taranza as he appears in Super Kirby Clash.