Learn the secrets of the Nightsisters.

He was a former Jedi Master who survived Order 66 and eventually crash-landed on Dathomir, the homeworld of the infamous Darth Maul and the Nightsister Clan, where he fell to the dark side of the Force.

Malicos was eventually defeated in his pursuit of power by Jedi Padawan Cal Kestis and Merrin, the last remaining Nightsister.

He is voiced by Liam McIntyre, who also portrayed Commander Pyre in Star Wars: Resistance, Captain Boomerang in Suicide Squad: Hell to Pay, and Weather Wizard in The Flash.

Taron Malicos was a human male Jedi Master who served the Jedi Order and the Galactic Republic as a Jedi General during the Clone Wars. During the war, Malicos became one of the Jedi's most trusted commanders and was renowned for his abilities as a tactician and motivator of his troops. However, Malicos' abilities as a general did not prevent his men from betraying him during Order 66. After escaping from his clone troopers, he crash landed on Dathomir, the dark homeworld of Darth Maul and the Nightsister Clan.

The darkness of the planet eventually corrupted Malicos, who fell to the dark side of the Force after some time on Dathomir. Instead of becoming lost to the Dark Side, Malicos controlled it and used it to subjugate the local Nightbrother Clan after killed their leader. At some point he lost faith in the Jedi Order, believing it had lost its way long before the Purge.

Malicos eventually took interest in the Nightsister Clan, a coven of powerful witches who had been wiped out by General Grievous during the Clone Wars. He approached Sister Merrin, the last survivor of the Clan, in the hopes of learning the secrets of her magick.

Malicos manipulated the young Nightsister, telling her that the Jedi were the ones who had wiped out her sisters. He promised that he would help her take revenge on the Jedi as long as she taught him her magick, an offer she reluctantly accepted. But Merrin quickly realizes that Malicos manipulated her and helps Cal during his fight against Malicos.

He is defeated by Cal Kestis in his final battle and is buried alive by Merrin.

Taron Malicos was a tall, middle-aged male Human with fair skin, blue eyes and a grey beard, mustache and hair. Despite his age, he had a strong, well-muscled physique.

During the Clone Wars, Jedi Master Taron Malicos was regarded by his peers as one of the most trusted battlefield commanders. He showed competency and courage while leading clone troopers in battle, using his competency to boost morale among the troopers.

However, after being betrayed and nearly killed by his own troops and spending several years on Dathomir, Malicos turned to the dark side. He became power-hungry and manipulative, as shown when he influenced the Nightbrothers to follow him and exerted power over Merrin when he asked to learn the art of Nightsister Magick. He was also keen at lying to keep his true identity secret. He did this to Cal Kestis by portraying himself as a "wanderer" who studied ancient history while Kestis wanted to know who he was.

Malicos also lost faith in the Jedi, recognizing they'd lost their way and the Clone Wars before it had even began, believing they'd allowed their traditions and past glories to blind them to reality. He desired to create a new and superior order and expressed interest in doing so with Cal Ketis. He seemed to take to Ketis as a kindred spirit, since they'd both survived Order 66, though when the younger Force Wielder rejected his offer, Malicos lost all interest in him and tried his best to kill him.

As a former Jedi Master, Taron Malicos was both a highly skilled lightsaber combatant and incredibly powerful and skilled force user. His abilities were sufficient to make him one of the Jedi Order's most decorated warriors and even survive Order 66 whereas many Jedi were killed. He would go on to slay the leader of the Nightbrothers Viscus and reign supreme over the clan. During his battle with the capable Jedi Cal Kestis and Nightsister Merrin, Malicos proved too powerful for Cal alone to defeat, being the only one apart from Vader in the game who was able to outclass Cal, a feat that proved Malicos was stronger than a majority of the Inquisitorius, specifically Second Sister and Ninth Sister, and was only defeated by Merrin with Cal's help.

Malicos displayed excellent application of Form III, forming a strong defensive wall against the combined attacks of and Sister Merrin. For offense, Malicos was extremely skilled in Jar'Kai, favoring the use of two single-bladed lightsabers in battle, and displayed mastery over Ataru, often incorperating unblockable aerial attacks, and an agressive fighting style that seems to indicate proficiency in Juyo.

Malicos proved incredibly competent in the use of telekinesis, able to lift multiple giant boulders simultaneously and fling them at his opponents, and occasionally used telekinesis to throw his lightsabers with incredible accuracy. He proved stronger than Cal with the Force when he easily force-gripped and threw him around and managed to restrain him while simultaneously lifting a giant boulder to crush him. Malicos could also use the Force to augment his own physique, performing acrobatic feats that shouldn't be possible for a man of his age.

As well as his proficiency with a lightsaber and his Force abilities, Malicos had also honed other skills over his lifetime. During the Clone Wars he garnered a reputation for his excellent tactical mind and leadership skills, the latter of which he displayed by subjugating the barbaric Nightbrothers. He was also a cunning manipulator, tricking Merrin into his service like the Nightbrothers. 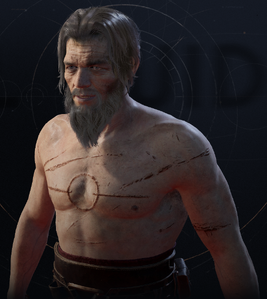 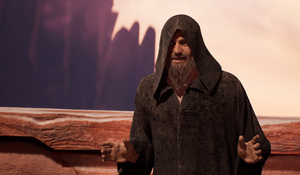 Malicos as the Wanderer.
Add a photo to this gallery

Retrieved from "https://villains.fandom.com/wiki/Taron_Malicos?oldid=4239483"
Community content is available under CC-BY-SA unless otherwise noted.