Villains Wiki
Register
Don't have an account?
Sign In
Advertisement
in: Guardians of the Galaxy Villains, Marvel Villains, Movie Villains,
and 48 more
English

Leader of the Ravager Clan

Marksmanship
Control over the Ravagers

Throwing his enemies out into space.

Kill Yondu Udonta and his loyalists so he can lead the Ravagers to glory (failed).

Taserface is a major antagonist in the 2017 Marvel film Guardians of the Galaxy Vol. 2. He was a lieutenant of the Yondu Ravager Clan (led by Yondu Udonta) before he betrayed and overthrew Yondu from his position believing him to be too weak and had gone soft.

He was portrayed by Chris Sullivan.

Taserface is a highly brutal, sadistic, and destructive being, as he enjoy making other suffer; this was shown when he smiled while beating up Yondu after overthrowing him and executing his loyal men. Taserface is also shown to be quite dumb sometimes, as he believes a quarter is a third (despite Yondu correctly explaining otherwise) and that his name is quite scary, despite people around seeing how ridiculous it is; even when Rocket pointed this out to everyone, Taserface threatened to kill Rocket for it.

Despite his stupidity, Taserface is also a highly intelligent being, as he knows how to deal with situations of danger. In addition, he is also highly powerful, tyrannical, authoritative, and totalitarian, as he overthrows Yondu for being too soft and leads the Ravagers in a belief that no one is able to stand against him.

And despite his villainous nature, Taserface is not completely evil, particularly shown when he refused to kill Baby Groot because Taserface found him too adorable to kill and instead had him be "The Mascot" of the Ravagers. However, he did not care for the little tree creature when Groot gets abused by Taserface's crew despite sparing him.

Taserface first appears in the Iron Lotus on the planet of Contraxia along with the other members of the Ravagers clan to relax. While there, he sees Yondu confront and argue with the legendary Ravager leader Stakar Ogord, who states that Yondu was exiled along with the rest of his clan due to child trafficking for the Celestial being Ego (which was against the Ravager code). As the two argue, Taserface is conversing with other members of the clan and convinces them that Yondu has gone soft and is no longer fit to lead the clan anymore, but an angry Tullk warns Taserface not to speak so lowly of Yondu. Not too long after the argument, Ayesha of the Sovereign arrived and hired the Ravagers for a new job where they need to track down and capture the Guardians of the Galaxy in response to them stealing Anulax Batteries on their last mission.

Attack on Berhert and Betrayal

After being hired, the Ravagers travel to the planet of Berhert where they spot Rocket Raccoon and Groot. Many of the Ravagers were taken out by a series of booby traps set up by Rocket Raccoon, but Yondu uses his Yaka Arrow to hold Rocket at bay. Rocket then offered a deal: he would give the batteries to the Ravagers for a lower reward in exchange for his and Groot's safety. Yondu accepted the deal by warning the other Ravagers that killing the Guardians would put the entire Ravager clan in trouble with the Nova Corps. Though several Ravagers agreed with Yondu on this and obliged to Rocket's deal, Kraglin Obfonteri questioned Yondu of how much he cared for Peter, but this incited Taserface to initate a revolt by saying that Yondu had gone soft. This lead to a stand off between the Ravagers loyal to Yondu and the ones who sided with Taserface. Unfortunately, both Yondu and Rocket are taken down by Nebula, who then allowed Taserface and his men to take Rocket and Groot captive along with Yondu and his loyalists.

Taking over the Ravagers

Taserface and the other Ravagers returned back to the Elector where he officially took over the Ravager Clan as the new leader. While onboard the Elector, Taserface and his supporters celebrate their mutiny while the Ravagers who are still loyal to Yondu were executed by being thrown into outer space. After beating up Yondu, Taserface went on how he will strike fear into the hearts of his enemies and that his name would be feared, but this caused Rocket to burst out laughing and mocked his name, which caused even some of the other Ravagers to laugh with him as well. Taserface initially tried to kill Rocket for his mockery, but decides on having Rocket and Yondu sent to a brig to be locked up in, intending to deliver Rocket to the Sovereign and Yondu to the Kree Empire (on Nebula's advice).

Taserface and his followers mocked Groot by making them their "mascot" and went to bed some time later. Afterwards, Groot was sent to the bedrooms and stole many things until Kraglin finally found a new Yaka Arrow Controller. Feeling remorseful over his past actions, Kraglin released Yondu and Rocket and gives the former the controller, admitting that he had no intention in siding up with Taserface. Yondu and Rocket then wipe out many of Taserface's men in revenge for their treachery. Being the last one standing, Taserface tries to confront Yondu in person, but the latter later used the arrow to destroy a large supply of flammable materials, causing the ship to self-destruct, and Taserface was caught in the explosion. As Yondu, Rocket, Kraglin and Groot flee on an escape pod, a burnt Taserface got into contact with the Sovereign Chambermaid and handed them over the coordinates of the escape pod. Knowing that he won't survive, Taserface requested the Chambermaid to tell Ayesha that it was Taserface himself that sent Yondu to his death. The Chambermaid bursts out laughing after hearing of the name, causing Taserface to grunt in defeat right before he perished to his death in the Elector's destruction.

Despite Taserface's death, the Sovereign managed to arrive at Ego's planet and after the battle against Ego and the Sovereign, Yondu perished to his death, though it was not in vain as he actually sacrificed himself to save Quill following Ego's death. 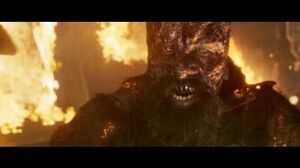