Patron God of Calormen and its people

Frightening his worshippers and enemies alike.

Be worshipped and feared by all (ongoing).

Oppose and win over Aslan (failed).

Tash is the overarching antagonist of The Chronicles of Narnia book series, serving as a mentioned character in the 1954 novel The Horse and His Boy and a supporting antagonist in the 1956 novel The Last Battle.

He is the demonic God of Calormen, an empire in the south of Narnia, and the rival of Aslan, the benevolent Great Lion that is worshiped by Narnians. He is considered to be the Patron of Calormen, to which great temples were built and his worshipers offered human sacrifices. Tash, like Aslan, has his own country, likely a hellish place, where the evil Narnians and those that opposed Aslan went after their deaths.

Tash is a god of the Calormenes and is a minor antagonist in Narnia and a supporting antagonist in The Last Battle. In The Last Battle, it is seen that he strikes fear and dread into those he meets, particularly in one scene: Tirian, Jill, Eustace and Poggin (when he passes by them on the way to the Stable Hill). In the Last Battle, Shift claims that the Carlomene's god Tash and Aslan the Lion are the same and called them Tashlan; however, this unintentionally summons Tash to the Stable. Rishda the Tarkaan inadvertantly calls Tash into Narnia and the King of Narnia Tirian arrives with his followers and he throws Shift into the Stable, where the dreaded Calormen god devours him. While fighting the Calormens, Tirian fights Rishda and throws him through the Stable, which leads to Aslan's Country, where Tash appears again and takes Rishda in as a sacrifice and as punishment for his sins. The High King Peter appears and banishes Tash from Narnia in Aslan's name, to which Tash vanishes with Rishda.

While Aslan appears to be God, Jesus or the Messiah in his Narnian form, Tash (as the opposite figure) is most likely Satan, but could also considered as the Antichrist (though Shift most fits the description of the Antichrist in Narnia) or another Satanic figure of Narnia. Aslan's name repels Tash away from his country, similar to how the Devil flees from the name of Jesus Christ. Also, since Evil Narnians went to Tash's Country, it is possible that this country is the Narnian Hell, while Aslan's Country is a more heavenly place.

Tash's birdlike appearance may also represent the pagan deities that were worshipped in ancient Mesopotamia and Egypt, such as Baal, Molech and Nisroch, while Tash's four arms may hint an influence from Hinduism. Interestingly, the word "tash" can be translated to "stone" or "rock" in Turkish; similar to how "aslan" is translated to "lion" in the same language.

In many respects, Tash resembles medieval Christian demonisations of Muhammed, such as Termagant (believed to be the patron god of Muslims) and Baphomet (which bears a similar animalistic apparence). 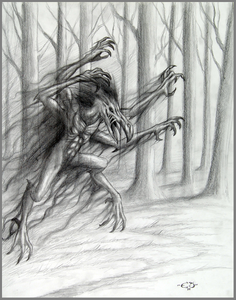 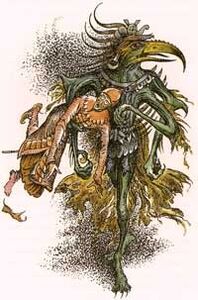 Tash after capturing Rishda the Tarkaan.