Tasha was a one-shot villainess from Supernatural, appearing in Season 10's "Paper Moon."

She was played by Emily Tennant.

Tasha was the younger sister of Kate, the young woman who became a werewolf in Season Eight's "Bitten." Before the events in "Paper Moon," Tasha was in an auto accident that left her hospitalized and at death's door, but Kate decided to save Tasha by making her a werewolf just like her. After biting her left arm, Tasha was taken out of the hospital by Kate, who told her everything: that they are both werewolves. However, while Kate has resisted her animalistic urges since becoming a werewolf two years prior, Tasha quickly gave in, as she was shown smiling evilly at Kate after killing one of her victims.

Though her face was not shown, Tasha appeared in the beginning of the episode and flirted with a biker outside a bar before slashing his throat with one of her claws and later killing him. She was later encountered by Sam and Dean and acted terrified before revealing herself as a werewolf. Kate, who the boys thought was behind the killings, catches them and later tells her about Tasha and how she became a werewolf. Later in the episode, the boys drive to a cabin in a wooded area, where they find Tasha and discover that she has started her own pack, who later hold them and Kate hostage. While the boys fight the pack members, Tasha attempts to convince Kate to join her, claiming that she now feels powerful and they can do whatever they want. Kate hugs Tasha, only to kill her with a silver knife. 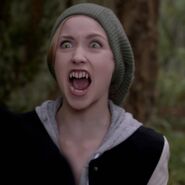