Leader of the Thunderbolts

Get revenge on Nick Fury

He was voiced by Clancy Brown, who also voices Mr. Krabs, Surtur in Thor: Ragnarok, The Kurgan in Highlander, Byron Hadley in The Shawshank Redemption, Viking Lofgren in Bad Boys, Lex Luthor in the DC Animated Universe, The Evil Entity in the Scooby-Doo franchise, Gunmar in Tales of Arcadia, Undertow in The Little Mermaid II: Return to the Sea, Hades in God of War III, Mr. Freeze in The Batman, Savage Opress in Star Wars: The Clone Wars, Chris Bradford in the 2012 Teenage Mutant Ninja Turtles series, General Wade Eiling in The Flash, Bloodwolf in The Adventures of Puss in Boots and Blackhand in Warcraft.

In Avengers Assemble, he is a supporting antagonist of the All-New All-Different Avengers arc of "Season 4: Secret Wars".

At some point, Taskmaster joined S.H.I.E.L.D. and took training from them and acquired equipment. He then was betrayed by Nick Fury and Phil Coulson and decided to someday take revenge on the S.H.I.E.L.D. agents.

Taskmaster is hired by Doctor Octopus and goes undercover as gym teacher Coach Yeager to learn Spider-Man's identity with Flash Thompson and Harry Osborn as suspects but is defeated when the web-slinger and White Tiger, and  later then he stolen a encrypted information (superheroes' secret identities) while dealing with Deadpool's unpredictable nature. During the "New Warriors" story arc, Taskmaster has his signature shield and a laser-sword. He strives to recruit fledgling young superheroes for his own sinister purposes and thus has regular conflict with Spider-Man. He first enlists the Beetle to retrieve a sample of the mass-produced Venom symbiote, leading to two mercenaries' showdown with Spider-Man and Agent Venom.

Taskmaster later hacks the S.H.I.E.L.D. information on different young heroes, successfully manipulating Cloak & Dagger into his training program. Taskmaster next tries to steal the Iron Spider armor by impersonating S.H.I.E.L.D. official Stan and recruit Amadeus Cho into his cause, losing the Iron Spider armor and gets defeated by Spider-Man and Iron Spider. After obtaining Doc Ock's notes, Taskmaster manipulated the Vulture onto his side. He then tries to recruit Ka-Zar while Kraven the Hunter wants to sacrifice Zabu for immortality but both are foiled by Spider-Man and Wolverine. After months of planning, Taskmaster leads his team to infiltrate the S.H.I.E.L.D. Tri-Carrier.

He has his team 'thin the herd' of the S.H.I.E.L.D. Trainees and manipulates the New Warriors into freeing several supervillains led by the Green Goblin (who hired Taskmaster) but Cloak & Dagger are left for dead and defect to Spider-Man's side. As the escaped supervillains fight the New Warriors and the Goblin retrieves the Siege Perilous, Taskmaster personally fights Spider-Man one-on-one but eventually defeated by the web-slinger. In "Contest of Champions" Pt. 1, Taskmaster is seen as one of the Grandmaster's many collected villains for the contest against Spider-Man and the Collector.

Taskmaster is a tactical genius at studying people and can solve mathematical problems in seconds, even predicting the next move of the enemy. He is strict towards others and intimidates them. He also appears to be very sarcastic. He is a master at copying others abilities and his focus is unmatchable, making him a formidable opponent in combat. 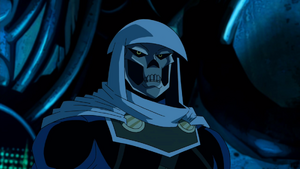 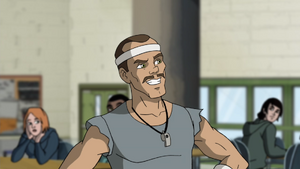 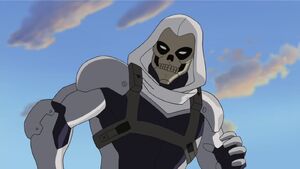 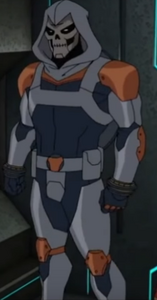 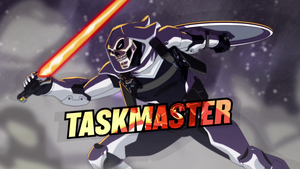 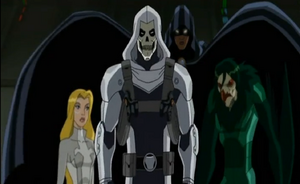 Taskmaster with the Thunderbolts. 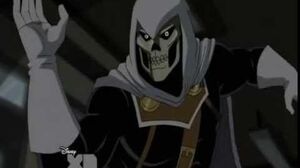 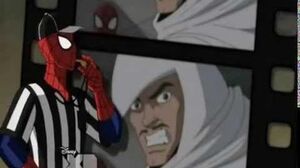 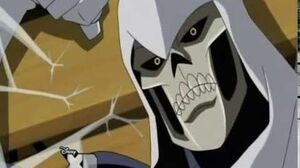 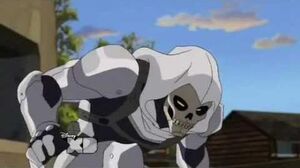 Ultimate Spiderman S2E16 - Taskmaster gets beaten down by Deadpool and Spiderman 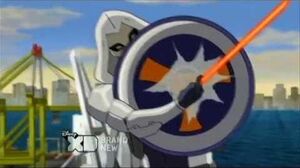 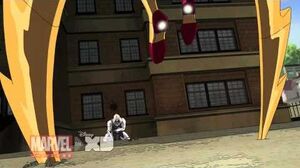