Leader of his mercenary group
Agent of S.H.I.E.L.D. (formerly)

Defeat the Avengers (both failed).

Originally a S.H.I.E.L.D. agent, Masters decided to get revenge on his former employers by helping Hydra agents infiltrate the organization. He was stopped by Black Widow, and escaped and became a mercenary-for-hire under the moniker "Taskmaster".

He was voiced by Walter Gray IV.

Not much is known about Anthony "Tony" Masters' past, but he became skilled at mimicking someone's abilities, and joined S.H.I.E.L.D. five or six years before the events of the game. When the spy Black Widow joined the agency, Nick Fury tasked Masters with helping her train. The two sparred constantly, and realized that they were equally matched, but Masters learned how to mimic her abilities with perfection. Though Tony proved himself to capable agent, his methods and aggressive attitude caused him to be dishonorably discharged from S.H.I.E.L.D. by his employers.

Wanting revenge, Tony decided to help Hydra agents infiltrate, but failed and was forced to escape from the organization when he was caught. After disappearing without a trace, Masters took on the title of "Taskmaster" and became a mercenary-for-hire, leading his own group by taking jobs. He would become the rival of Black Widow, an enemy of the Avengers, and S.H.I.E.L.D. eventually learned that Tony and Taskmaster were the same individual.

Taskmaster was hired by Dr. Monica Rappaccinni to steal Terrigen reactor during the Avengers ceremony, and tasked his mercenaries with distracting the Avengers at the Golden Gate Bridge while another unit broke into the Chimera. After his men set a bomb on the bridge, Taskmaster made himself present and battled Black Widow once again. He was defeated by Black Widow and taken into custody, but succeeded in distracting the Avengers from the Chimera, but the Chimera's security protocol activated and went airborne. As a result, many people were infected with Terrigen and given Inhuman abilities and the Avengers were disbanded. Masters later escaped form confinement, and was hired by Rappaccini to develop the Adaptoid's photo-reflexes.

After M.O.D.O.K. was defeated by the Avengers, Taskmaster was ordered by AIM to collect S.H.I.E.L.D.'s files and hidden protocols to get more valuable resources. The Avengers managed to secure his location, and Maria Hill tasked them and S.H.I.E.L.D. agents with attack an AIM facility. Taskmaster battled the Avengers when they attacked the base, but was defeated and Hill destroyed the base's systems before the data could be transmitted to AIM. He was taken to custody by S.H.I.E.L.D., and the Avengers then learned that Masters was a subject of Rappaccini's cloning project. 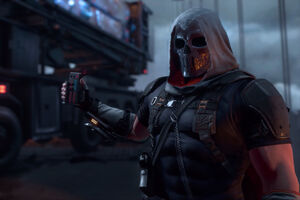 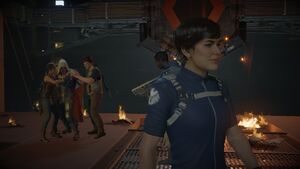