Photo-reflexive memory (whatever he sees he can learn immediately)

Setting up challenges for his target.

Learn as much as he can about Spider-Man for his employer’s contract (succeeded).

Taskmaster is a minor antagonist in the 2018 video game Marvel's Spider-Man. He is a mercenary who was hired to observe Spider-Man and learn his moves. He also sets challenges across New York City to see the Spider's skills and later test his abilities.

He was voiced by Brian Bloom, who also played Brock Pike in The A-Team, and voiced Adam "Kane" Marcus in the Kane & Lynch series, Black Mask in the Batman: Arkham series (excluding Batman: Arkham City), and Rumble McSkirmish in Gravity Falls.

Taskmaster's background is a complete mystery. His skills and photo-reflexive memory made him a masterful mercenary and target for high-profile jobs. At one point in his life he claims to have fought toe-to-toe with the Avengers.

Hired by a mysterious organization that only claimed to pay "six-figures" to see if Spider-Man was a hero worthy of recruiting, Taskmaster desired to learn everything there was about the wall-crawler. He set up recon points across New York for Spider-Man to unlock; he planted bombs on a timer for him to stop detonating, drones seeding spy-cams across the city and made him aware of mercenaries attacking executives and diplomats in order for him to stop the crimes. Therefore, Taskmaster knew all about Spider-Man abilities in stealth, traversal, combat and speed and was ready to fight.

After completing a number of challenges, Taskmaster ambushed Spider-Man and when the latter won he claimed he had much to learn about his opponent before a rematch. When all challenges were completed and Taskmaster was defeated, he revealed his intention and employers but still unimpressed by Spider-Man claimed that "some people just deserve to be poor" before escaping his webs and disappearing.

Being a contract mercenary, Taskmaster prides himself on professionalism and his attitude in completing his job. Despite this he shows patience as he is not content until he has learnt everything about his target before completion and adding their abilities to his already vast skillset. Given the high-grade military nature of his equipment and recon points, it’s unlikely Taskmaster is drawn by money but a desire to encounter a worthy opponent in his line of work. He appears both intrigued and enjoyed about the possibility of Spider-Man being this individual but repeatedly looks down on his own capabilities even after he was defeated by the wall-crawler, he casually implied he was not worth his client's time nor money. However, Taskmaster even praises Spider-Man completing his challenges and even attempts to teach him to improve; because of this Spider-Man jokingly claims Taskmaster to be his coach desiring him to improve as a hero albeit an insane one. 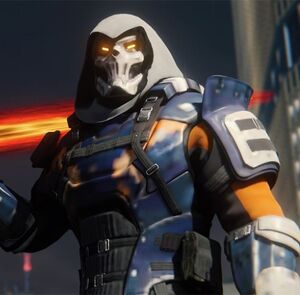 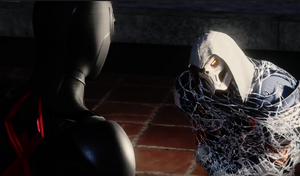