Member of Chi She Lian (formerly)

Hanging out with Eto.
Commanding Aogiri armies.
Ordering his subordinates.

Tatara (in Japanese: タタラ, Tatara) is a ghoul and one of the major recurring antagonists of the supernatural dark fantasy manga/anime series Tokyo Ghoul. He is the second-in-command of the Aogiri Tree and is one of the direct subordinates of the One-Eyed King putting him in the position as one of Aogiri's top leaders.

He was voiced by Koji Yusa in the Japanese version, and Christopher Wehkamp in the English dubbed version.

Tatara was born in China where he was part of a ghoul organization called Chi She Lian and was friends with fellow members Fie and Yan sometime in the past. One day however, a Ghoul Investigator from the C.C.G. known as Kousuke Houji had assisted Chinese Authorities in tracking down the Chi She Lian organization and destroyed it leaving Tatara as the only known/sole survivor of the organization. Tatara then fled to Japan to escape China and survive where he was attracted by the preaching of Ghoul Supremacy by the mysterious One-Eyed King and he then joined the Aogiri Tree. Overtime, he had become one of the direct subordinates of the King and became the Second-in-Command of the Aogiri Tree. Sometime the past, Tatara had ran into Ayato Kirishima where he saw his power and potential, and recruited him into Aogiri.

Tatara first appears in the Aogiri Arc of the story. His first appearance in the anime was where along with Noro and the Bin Brothers were attacking a small nearby local CCG Compound. Tatara found the last surviving Ghoul Investigator in the building and immediately killed him and stated that he was the last one. Tatara then walked onto the roof where he told Eto that all of the CCG Operatives were killed and that they could leave. In the manga, he first appears in Chapter 54 where Ken Kaneki is brought before him after his abduction by Yakumo Oomori, Ayato and Nico following their stop at Anteiku. Tatara looks at Kaneki and pierces his abdomen to have him reveal his kakugan but thinks that his eye is "no good" and leaves him with Ayato. Tatara then leaves with Eto and leaves the 11th Ward Base in Noro's hands and predicts that the CCG will come which they do.

Once the CCG finally arrive, Tatara sits back with Eto as he observes the battle from the distance. Once the battle is over, the Ghoul Detention Center is attacked and Tatra and Eto lead the assault alongside some Aogiri Soldiers. The prison is ravaged and dozens of ghouls are freed and those who survived the raid all team up and join Aogiri expanding the organization's size and numbers.

Sometime after the 11th Ward Battle, the CCG's Forces were left scattered and were just regrouping and reorganizing when the Aogiri Tree launched an attack on the Ghoul Detention Center in the 23rd Ward. Tatara had participated in the raid and he had killed a Senior Ghoul Investigator sometime durignt he raid. Eventually, he stepped out of the control room and ran into Houji once more where he and Houji had a short little skirmish before being interrupted by Seidou Takizawa and gas was released into the room and left. He eventually fled once the raid was done.

Post-Aogiri, Tatara and other members of the Aogiri Tree are seen on the hunt for Akihiro Kanou and begin a man-hunt for him. Tatara finds and interrogates Taguchi, a nurse who worked with Kanou, while he was at Kanou General Hospital. He then wraps up the interrogation and gives Noro a foot which possibly belongs to the nurse.

During the CCG's assault on the 20th Ward after Anteiku was revealed to have been a secret ghoul organization, Tatara stands by and waits for Yoshimura and the CCG Forces to be delt with and their numbers thined out. Once the Anteiku forces were wipped out, Eto went in as the One-Eyed Owl and Tatara officially started the Aogiri Assault on the surviving CCG Forces. He led armies of Aogiri Tree troops into battle as he faced off with the beatened yet strongly resisting CCG Forces and confronted Takizawa. He demanded to know where Houji was but when he refused, he threw him in the air and Noro took a bite out of him causing Amon to go furious and charge at him. Tatara most likely won but Amon's status remains unclear. Sometime after the raid, it's revealed that Tatara took the ruined body of Takizawa to Kanou and allowed him to be turned into an Artificial One-Eyed Ghoul.

Three years later in Tokyo Ghoul:re, Tatara is still alive and active within Aogiri. Sometime during the Auction, he lead a small team of Aogiri Troops to attack a Quinque Steel Transport but then, the attack fails and is forced to retreat. Back at a greenhouse which is an Aogiri Base, Tatara is being yelled at by Ayato who wants the Aogiri Tree to rescue Hinami from the Ghoul Detention Center and Tatara says no. He soon breaks up a potential fight after Takizawa mocks Ayato for having an affection and stating that he fought her and Tatara berates Ayato for trying to start a fight.

Tatara appears in Kanou's laboratory in the aftermath of the Tsukiyama Operation where he's been given new corpses for his experiments. Kanou is seen thanking Tatara for the resources he's been provided (especially with the corpse of a Quinx, Ginshi Shirazu) and says that he wishes to talk to Eto. Tatara informs him that Eto's "busy" and that he should stay out of things where he shouldn't be nosing around in.

Prior to the operation, Tatara is seen overlooking the distance on the Aogiri Tree base on Rushima during Eto's final press conference. During the CCG's invasion of the Rushima base, Tatara ran into his old adversary, Houji, where he stated that it would be the end for him and he planned to avenge his brother Yan from all those years ago. The two of them would fight with Tatara launching various attacks against Houji only to have them be deflected but then Tatara practically teleports towards him only to be interrupted by Seidou. Tatara is mad at Seidou's interference but he's then attacked by Takizawa's ukaku kagune and is then impaled. As he is dying, he thinks back to the Anteiku Raid and wonders if Arima got what he wanted by letting him carry away Kaneki. Tatara dies but Houji is killed shortly afterwards making sure he didn't die in vain.

Tatara is quite tall as he towers over his partner Eto. He has white hair and red eyes. He wears a red mask which covers the lower half of his face and wears a gigantic blue cloak when he's out on missions. His cloak is similar to the ones that the Bin Brothers wear and like other cloaks that standard Aogiri soldiers waer except his is blue and the standard uniform is red. Underneath the cloak is a big white trench coat that covers his entire body and even his hands.

Tatara comes across as a quite loyal individual as he is the Second-in-Command of the Aogiri Tree, leads Aogiri's Forces in battle, and is one of the direct subordinates of the One-Eyed King and probably even met him in person once. He is very cold-hearted, ruthless, and cruel when in combat as he will kill any enemy to Aogiri with intense strength and without any hesitation. His stamina is very high and is always monitoring the members of Aogiri. The only time he ever snaps is when he sees someone or something that reminds him of Kousuke Houji, a ghoul investigator who led the destruction of the Chi She Lian organization and now seeks vengeance against him. He goes insane even if a quinque is associated with Houji and has immense hatred for the investigator in general. Since he's a member of Aogiri, he believes that ghouls are vastly superior towards humans and the ideology of ghoul supremacy.

Tatara appears to have little, if any, care about the other low-ranking members of the Aogiri Tree. This is shown in the aftermath of the auction where he is reluctant to rescue Hinami from the CCG and is shown to happily leave her behind and when Ayato mentions the many members of Aogiri who had died and asked if they were all disposable in the organization, Tatara refers to them as stray dogs and says that shey should behave like them, confirming his contemptuous and insolent view of low-ranking and weaker Aogiri members. It is unknown why Tatara is fine with leaving captured members behind and shows no care for them dying but it is probably stemming from his past where he had lost his friend Fei and brother Yan and most likely tries to avoid personal attachments with other people to avoid feeling the same pain again. Eto, however, is Tatara's friend, leaving the assumption that he has a semi-friendship with Eto. Tatara also appears to be a nihilist as he shows no care for his subordinates and views everyone under his authority as mere pawns.

Like all ghouls, Tatara cannot eat and consume human food otherwise it'll weaken him. Q-Bullets are most likely to cause him any harm. However, he is immensely strong, very powerful, and most likely has very few, if any weaknesses at all. 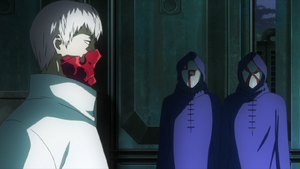 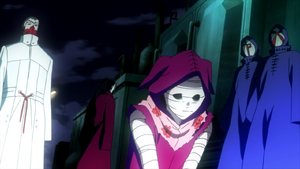 Tatara with Eto, Noro, and the Bin Brothers on top of the Aogiri Hideout. 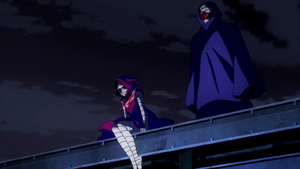 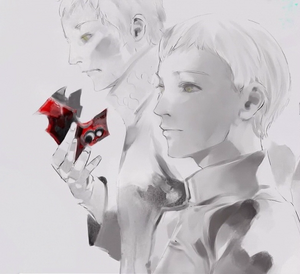 Tatara in the past. 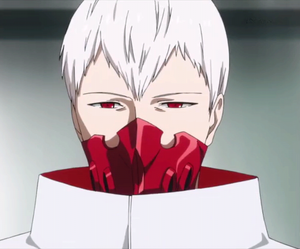 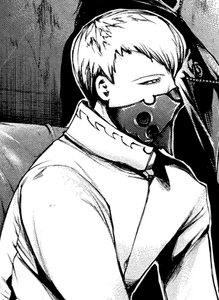 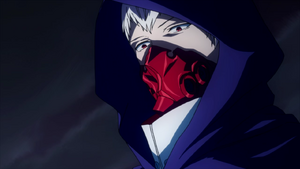 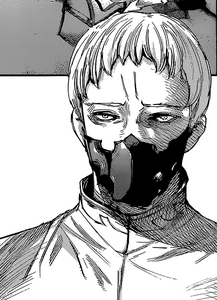 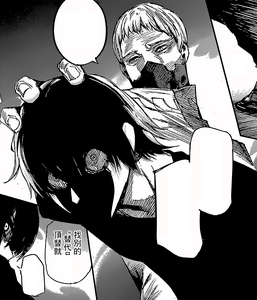 Tatara orders Ayato yo stand down after Seidou provoked him 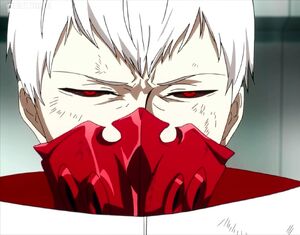 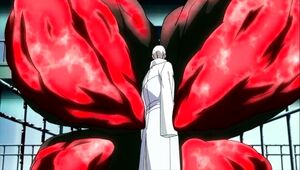 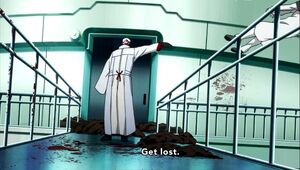 Tatara and Houji reunite once more 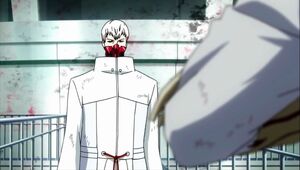 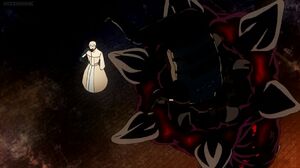 Tatara throwing Siedou to Noro for him to eat. 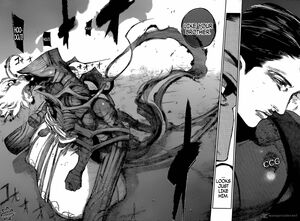 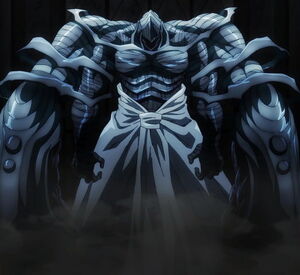 Tatara's kakuja in the anime.
Add a photo to this gallery

Retrieved from "https://villains.fandom.com/wiki/Tatara?oldid=4133689"
Community content is available under CC-BY-SA unless otherwise noted.