Listening to the music of Kurt Cobain.

Tate Langdon (also known as The Rubber Man) is the main antagonist of the first season of the horror anthology TV series American Horror Story, known to fans as Murder House and a minor character in the eighth season, Apocalypse.

Tate is the son of Constance Langdon and brother of Adelaide, Beauregard, and at least one other sibling. His ghost befriends and becomes the boyfriend of Violet Harmon. He is the "biological" father of Michael Langdon, the Anti-Christ that conceived after he dressed as the Rubber Man and raped Vivien Harmon, Violet's mother. This eventually ended their friendship, and a remorseful Tate vowed to atone his sins and wait until Violet to forgive him, even if she might never forgive him for an eternity. It's later revealed that Satan was actually controlling/influencing Tate and using him as a pawn to create the Anti-Christ, making Tate nothing more than an unwilling proxy for the Devil's plans. He redeems himself by saving Vivian from Michael, and Violet forgives him and takes him back.

He was portrayed by Evan Peters, who also played James Patrick March in Season 5, and Kai Anderson in Season 7.

Born in 1977, Tate is the son of Hugo and Constance Langdon, with three other siblings. Even as the only one of his siblings to not have any mental or physical issue, he mind is still not well, due to the lack of a father figure and his mother neglecting him. Although Constance had killed his father due to his unfaithfulness, Tate still regards that he simply ran off, possibly due to his mother telling him that. Finding the specter of Nora Montgomery as a motherly figure due to her real son Infantata attempting to hurt the boy, he eventually went insane, setting his mother's boyfriend ablaze for the murder of Beauregard and then went on a rampage at a local high-school, killing 15 people. He then went back home and stayed there until he was snuffed out by a SWAT team, his phantom now calling the Murder House his home.

Tate first appears in the pilot as one of Violet's psychologist father Ben's new patients. While in session, he describes an ongoing dream in which he kills other people at his high school. It is then revealed in "Halloween: Part 2" that Tate was allegedly responsible for a school shooting that took the lives of fifteen of his classmates. During Halloween night (the first time he had left the house since his death as ghosts are only able to leave the house during Halloween), he and Violet are visited by the ghosts of his last five victims. He was killed at home when SWAT-team members shot him 17 times for attempting to pull out a gun.

It is implied by Constance that Tate's violent and unstable behavior is the result of the house's influence, while he is also shown using meth on the morning of the shooting. This is further supported by a teacher at the school, who said it seemed out of character for him. As a ghost, he has murdered numerous people in the house, often while dressed in a latex fetish suit. He also rapes and impregnates Vivien, Ben's wife and Violet's mother, causing her to give birth to a devious Anti-Christ: Michael Langdon.

Tate claims to know nothing about the murders he committed, both while being alive and after his death, but it is revealed in the season one finale that Tate was aware but was simply in denial/unable to take responsibility for his actions. Upon discovering that Tate had raped her mother, and was therefore responsible for her death, Violet breaks up with him and banishes him from contact with her. Tate promises to wait for her to forgive him, even if it means waiting forever.

Later it's confirmed that Tate's vile and malicious actions were all the result of the the dark force inhabiting the Murder House, which turned out to be none other than the Devil himself, having influenced and twisted Tate into a psychopathic pawn before and after his death in his plan to create the Anti-Christ. This means that Tate was truly innocent and that all the atrocities he committed were never of his own accord, he had been forced to do those things and even before the truth was confirmed he still showed remorse for his actions despite having no control making him another one of The Devil's victims alongside the lives he took. He later meets his "son" Michael, who was conceived from Tate's forced rape of Vivien while being used as a conduit/vessel by Michael's true father Satan. He rejects Michael as his son due to the circumstances of his conception and the fact that Michael has killed more people than Tate ever did. He later saves Vivien from being burned and ceasing to exist at the hands of Michael, which Violet finds out causing her to finally forgive Tate for his enforced actions and the pair resume their relationship.

Tate has a very grunge-like appearance, having been a teenager in the early 1990s. He likes Nirvana and in one episode asked Violet if she had any 'Kurt Cobain'. His disposition is primarily solemn and weary, with perpetual bags under his eyes. There is tension between him and his mother, Constance. He has even admitted to her that he hates her. His hatred for his mother was born out of her negligent parenting and the verbal abuse she constantly dealt him as a child in her drunken alcoholic rages. Despite her disapproval of his behavior, Constance frequently makes excuses for him, saying that he is a sensitive boy. This appears to be true, as Tate appears to be apathetic and indifferent at first, but he can quickly become enraged when someone or something he cares about is threatened. Tate pretends that he is oblivious to his current state of existence to those unfamiliar with his past. In truth, he is aware that he is a mysterious ghost. He kept this a secret, fearing Violet would leave him if she knew.

As a ghost, Tate primarily dons a BDSM fetish Gimp coverall to become (what is popularly referred to as) the Rubber Man whenever he commits violent acts. In this persona, he killed Chad Warwick and Patrick in a particularly brutal fashion. He beat Chad and drowned him to death, and went on to beat Patrick and sodomize him with a fire poker as he was dying. Tate appears to be super-humanly strong as a ghost, as he was capable of overwhelming Patrick and Ben in separate fights. In his earlier treatments by Ben, Tate often fantasized about murdering his classmates (though seemingly unaware such "fantasies" are actually memories of true events) and took pleasure in mocking Ben about his sexual desires and infidelity with his past student, Hayden McClaine. Tate has also hinted to Ben about the lustful desires Tate had for Violet.

As his relationship with Violet and treatments with Ben continued, Tate seemed to become softer and friendlier. He often speaks highly of Ben as a father, telling Violet he wished he had a father like him while growing up. He also expressed the sentiment to Hayden that he was getting tired of hurting people. However, he continues to be unwilling to let Violet move out of the House, to the point where he attacked both Ben and Vivien as the Rubber Man, though at the end of Smoldering Children, it is revealed that this was because he was trying to prevent Violet from finding out she was dead, as he was afraid of how she would react. Tate would later tell Ben that he really did feel like his treatments were helping him get better. He also broke down in tears and admitted to the suffering he'd caused, though Ben did not believe he was really remorseful at first before Tate finally admits to all the bad things he did before Ben opens up to him again even offering therapy sessions daily for years.

Although, he clearly unwell still seemed to care deeply for Violet and seemed madly in love with her to the point of not wanting her to leave him as shown in Smoldering Children where after Violet admits she cannot forgive him and says she won't be with him he breaks down in tears and desperately begs for her to stay with him saying "You're all I want. You're all I Have!".

The violent and malicious aspects of his personality were later revealed to be the result of the Murder House's malevolent influence, which was none other than Satan himself. This meant all the atrocities he committed before and after his death as a human were under Satan's control, which is what made Tate act like a psychopathic misanthrope meaning that deep down Tate was actually a descent person that was used as an unwilling pawn. It's likely that his feelings for Violet actually helped bring out his true personality and while at first he would still switch between his true self and his brainwashed persona (as the guilt of his forced actions and lack of understanding as to why he actually did it caused him to develop Dissociative Identity Disorder), her rejection of him in the end is what frees Tate of Satan's control as his love for Violet allowed him to feel genuine humanity again. Although Tate showed great animosity towards his "son" Michael Landon, because he was a walking reminder of Tate's forced rape of Michael's mother, Vivien which ultimately resulted in him losing Violet, the love of his life. He later redeemed himself when he saved Vivien's spirit from being incinerated and destroyed by Michael. This causes Violet to finally forgive him and see him for who he truly is.

Satan was likely able to get a hold of Tate due to his troubled and traumatic childhood, his physically and mentally challenged brother Beau being chained and locked up in their attic, his sister having a closed room reserved for "punishment" their psychotic mother would put her in when she deemed "necessary", and the final straw was when Constance had Larry smother Beau to prevent Child Protective Services from taking him and Constance tried playing it off as natural causes. His mother's constant denial of her abuse, role in Beau's murder, and constant enablement while falsely believing herself to be in the right drove Tate into Satan's control, making Constance the one who "lit the fuse" to the "explosion" that were Tate's atrocities.

Note: All of Tate's victims were killed and tormented by him while Satan was controlling and influencing his actions. Tate had no control of his actions and was used to commit murder, assault, and abuse by proxy although there is an exception with Bianca Forest as that was done in order to save Violet and Vivien.

Tate as portrayed in his school shooting fantasy. 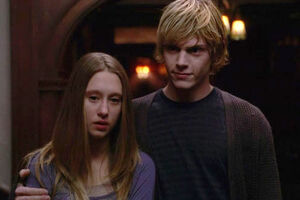 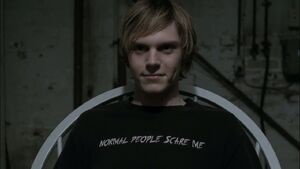 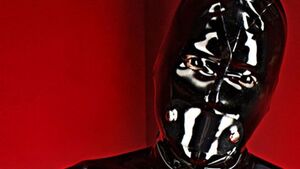 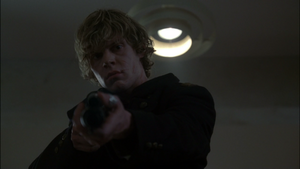 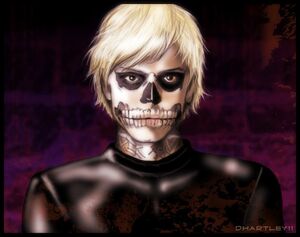 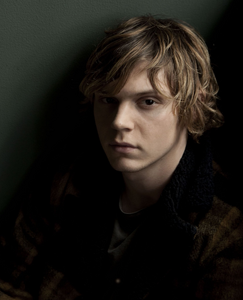