Tatewaki Konzern (帯刀コンツェルン) is a financial corporation owned by Ryuzaburo Tatewaki and one of the three main antagonist factions in Tokusou Robo Janperson. While they appear as a legitimate corporation to the public, they secretly fund a number of criminal activities. Because this organization is the biggest and has the most resources, it outlasted the other three groups and gave Janperson most problems.

The organization first appeared when they employed several assassins, Bounty Killer Django, Street Fighters and Wind Demon Ninja Doki to take out Janperson, a robot detective who mysteriously appeared in Tokyo and was patrolling the streets to investigate crime. After their initial scheme failed, the Konzern would go on to hatch several more schemes to either terminate Janperson or sabotage their business rivals. They would sponsor several criminals in exchange for receiving a portion of the profits from their crimes. 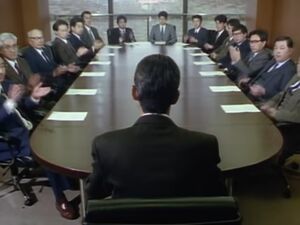 The Tatewaki Konzern executive board.