To take revenge on mankind for destroy his life by accepting Tathagata Killer and wipe out humans from Earth.

Tathagata is a supporting character and the true secondary antagonist of the 2012 sci-fi/fantasy animated Japanese film The Mystical Laws. He is the vessel of the Evil Tathagata (the main antagonist) who was possessed and was used to put an end to humanity that he considered dirty. Although Tathagata Killer is the true antagonist, Tathagata had been involved in other crimes long before he was possessed by Tathagata Killer.

He was voiced by Daisuke Hirakawa in the Japanese version, and Kyle Williams in the English version.

Tathagata has no parents, and had no family. He was born and raised in a military laboratory of China and spent his entire life suffering scientific experiments and tests by the will of China nation. He grew up being used as a military tool of China and was disciplined to serve the country until his death. He served his country, however, due to his sad life where he was created just to be a tool ready to be discarded, he developed a tremendous hatred for humanity and began to hate humans.

After he finally has become an adult, he joined to the army of China and became the Director of Science Division on China army and has quickly become one of most successful scientists in the world. Tathagata Killer sought to achieve the greatest of all sciences to create a better nation and bring peace to the world, and to achieve this goal he closed a deal with Leika Chan to offer her secrets of her High Alien Technology for him, to create a world of peace and offer a home planet to her people of Velga. Leika then accepts his offer and she offers her technology to him. However, Tathagata, blinded by his hatred towards humanity for his upbringing, accepted an evil being in his mind and soul; Emperor Tathagata Killer, and would abuse the very technology Leika offered to him.

Now nothing more than instrument of Tathagata Killer's will, Tathagata staged a coup and assumed the throne as Emperor of the China. Later, he rename China to Godom Empire and quickly strengthened his military force, using Leika's technology. After he transformed the Godom Empire into the most powerful military nation in the world, he declared war to the humanity and tried to take over the world to make all the countries on planet part of his Empire.

After the catastrophic event that was started by Tathagata Killer; the event that almost extinguished humanity, Tathagata was left behind after Tathagata Killer left his body. While he was lying half dead, he told his tragic story to Leika and Shou after the final battle and told them that he was not human, and his death was a punishment for his sin; the sin he was born. However, Shou mentions that he was wrong, and he was a son of god, after heard that, Tathagata cries regretting what he did and dies in peace having an honorable death.

Tathagata in QI test along with child-experiments 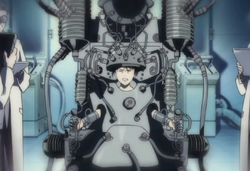 Add a photo to this gallery
Retrieved from "https://villains.fandom.com/wiki/Tathagata?oldid=3553580"
Community content is available under CC-BY-SA unless otherwise noted.