Second in Command of the Foot Clan

Kill the Turtles and Splinter (in the first film).

Create Tokka and Rahzar to go against the Turtles (in the sequel).
Obtain the Kuro Kabuto and become the new leader of the Foot Clan (2012 series, all failed).

He was portrayed by Toshishiro Obata in the 1990 film.

In the first movie, Tatsu acts as the mentor of the Foot ninjas and abuses them physically for failure, even almost killing a young teenager called Shen Sho. Casey Jones defeated Tatsu at the end of the movie.

In the second movie, Tatsu tried to assume the leadership of the Foot after the Shredder's presumed death. However, it turned out that his master was alive and he served him once more. Tatsu's fate is unknown at the end of the movie, as he was last seen being crushed between the shells of all four turtles. He was arrested by the NYPD and sent to prison off-screen.

In the 2012 Turtles series, a much different version of Tatsu (now called Hattori Tatsu) serves as a minor yet important antagonist in the first arc of Season 5. He was voice by Michael Hagiwara.

Tatsu, after hearing about Shredder's death, decides to go to New York and take over the Foot Clan from Karai, who now uses it for good. Tatsu soon turns the Foot against Karai and her friend Shinigami and orders them to hunt her down, and they end up chasing her to a warehouse where a masked Tatsu is waiting for them. After he takes out Shinigami, Karai then realizes Tatsu's identity and transforms into her snake form to attack him, only to be easily brushed aside, although Shinigami manages to distract him long enough for them to escape. An angry Tatsu then strikes one of his ninjas, frustrated at their incompetence, and orders them to find the Kuro Kabuto.

Karai and Shinigami then head to the Turtles' lair in order to receive their assistance and stop Tatsu from retrieving the Kuro Kabuto, and, although Casey Jones argues that they should let Tiger Claw and Tatsu's forces fight it out, Raphael and Michelangelo return and inform them of Tiger Claw's desire to use the Kabuto to revive Shredder.

Later, while he is walking to his car, Tatsu is confronted by Fishface and Rahzar, the latter of which recognizes Tatsu. Tatsu then easily defeats Fishface and offers to let Rahzar back into his new Foot Clan before driving off. As Fishface gets back up, Rahzar states that Tatsu's offer is worth considering.

At his new headquarters, Tatsu joyfully wields the Kuro Kabuto just as the Turtles, Karai and Shinigami allies shut off power to the building and Leonardo and Karai prepare to attack, however, Tatsu easily blocks them and starts to fight back. Tatsu then begins to beat down on Leonardo, Karai, Shinigami and Michelangelo and Karai manages to knock off Tatsu's mask, revealing that, to everyone's shock, he is completely blind. Tatsu then continues to fight the four warriors and explains that he was born blind, yet had an acute sense of hearing and, while everyone mocked him, Shredder saw his abilities as an asset and let him join the Foot Clan. Tatsu also reveals that, when she began to lead the Foot, Karai sent her ninjas to kill him, although he survived and sought vengeance. As April, Casey Jones, Donatello and Raphael join the fight, Tatsu continues to beat down on the Turtles and their allies, seriously injuring Casey and Shinigami, to the point where Raphael comments that fighting Tatsu is like fighting Shredder. At that moment, Leonardo states that Tatsu is still blind and begins to throw off his sense of hearing by constantly tossing Casey Jones' explosive hockey pucks while Karai runs at him. However, Tatsu is able to hear Karai and counters, only for Leonardo to sneak up behind him and deliver a strike at his nervous system, disabling his hearing long enough for Karai to defeat him using her snake form. As Karai takes back the Foot Clan, Rahzar drops in and Tatsu believes he is there to help, only for Rahzar to deny alliance to him as Kavaxas drops through the ceiling and drains Tatsu's soul, killing him.

After the Seal of the Ancients is broken by the revived Super Shredder, Kavaxas reveals that killing an evil warrior (Tatsu), reviving an evil warrior (Shredder) and destroying the Seal were all part of a prophecy that would allow Kavaxas to release the spirits of the underworld on to the realm of mortals. Tatsu's spirit later appears as one of the many spirits released from the underworld, however, he is defeated by April, Donatello, and Raphael using the anti-spirit devices Donatello created and is presumably sent back to the Netherworld. 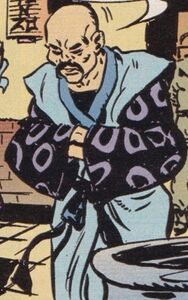