The Strangler
Bodyguard
The Maniac

Kill SpongeBob and anyone who tattles on him (failed).

The Tattletale Strangler is the titular main antagonist of the SpongeBob SquarePants episode "SpongeBob Meets the Strangler". He is a desperate serial killer who strangles his victims after they rat him out. He later returns in The Krusty Slammer, but no lines.

He was voiced by Thomas F. Wilson, who also played Biff Tannen, Buford Tannen, and Griff Tannen, all from the Back to the Future film series and he also voiced Victor, and Flats the Flounder in the SpongeBob SquarePants series, and Ashtin Carnaby in Atlantis: Milo's Return.

After numerous failed attempts to get a bodyguard to protect him from the Strangler, the Strangler himself, wearing a fake mustache and poses himself as a bodyguard, gets SpongeBob to hire him, though SpongeBob is unaware that it is the Strangler in disguise. Strangler then tries to strangle SpongeBob. However, figuring that there are too many witnesses around, he decides that they should move themselves to somewhere secluded. SpongeBob suggests his house, which Strangler approves of, although SpongeBob says he has to perform a few errands first.

Following the drawn out errands, SpongeBob fails to find his house key, leading to Strangler suggesting that they break in through the window. SpongeBob then jumps onto Strangler's eyes using spiky cleats, injuring him. After sticking to Strangler for 6 hours straight, SpongeBob apologizes and then decides to grab the key under his door mat, infuriating Strangler. Strangler then believes the two of them to be alone and prepares to kill SpongeBob, only to realize that his friends were planning a surprise party for him. Strangler waits the party out and attempts to kill SpongeBob once more, but his friends return to throw another party soon afterwards. As the party ends, Strangler tried to strangle SpongeBob, only for Patrick to arrive. Impatiently, Strangler tries to force Patrick to leave, unintentionally tricking him into believing that he is really the Strangler.

When SpongeBob makes opprobrious remarks on Patrick being the Strangler, being frustrated to no end, the Strangler rips off his fake mustache and reveals his identity, only to run out of SpongeBob's house when he does not realize who he is and his friends try to throw another party. The Strangler attempts to run away from SpongeBob, but is followed by him to no end, eventually ending up in a jail cell as SpongeBob shows up to see him, still thinking that the Strangler is his bodyguard and the Strangler confesses that he is not really his bodyguard and tells him that he's really the Strangler as seen on the "Wanted" poster, much to SpongeBob's horror. Strangler then willingly stays in prison as the police congratulate SpongeBob for putting him behind bars. The Strangler eventually becomes thankful that he is away from the yellow idiot, and Patrick, who is also in the cell, asks him what he is in for.

He returns 14.5 years later in "The Krusty Slammer", where he's among a platoon of prisoners living at The Krusty Krab, where Krabs turns it into a prison, but for Plankton only. He is first seen in a cell next to Plankton's former crocodile colleague, Reggie.  Later during mail call, he thanks Spongebob for giving him a letter in unison with his prison colleagues. He is then seen relaxing in his cell drinking a lemonade like he's in a spa. He is also seen watching Krabs cause a food fight with prisoners and his own customers, he's among throwing tomatoes at him. The next morning, as Krabs comes back to the restaurant, he and the prisoners surprise him by smiling and waving to him after being kicked out last night. The Strangler is last seen witnessing Krabs being escorted to the Chum Bucket as Plankton's prisoner. 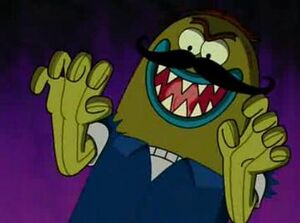 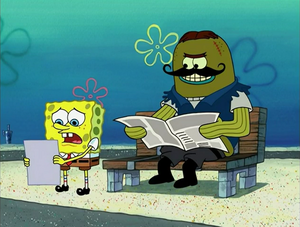